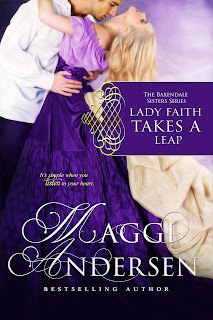 Faith Baxendale has always been a dutiful daughter who wishes to please her father. She doesn’t have an adventurous bone in her body, unlike her younger sister, Hope, gallivanting around Italy with their aunt, nor is she rebellious like her older sister, Honor. And so unlike Charity, who loses herself in creative pursuits. Even Mercy, at fifteen, shows more backbone!
Now Faith’s first Season has ended with no clear choice of a husband, and her father’s patience is wearing thin. He urges her to marry the man of his choice. It doesn’t help when the neighbor’s son, Lord Vaughn Winborne, has returned home for the hunt ball. The black sheep of the family, Vaughn has fascinated Faith since she was in the schoolroom.
Vaughn returns to Brandreth Park, determined to get his life on track. His elder brother, Chaloner, Marquess of Brandreth, still looks upon him as a reckless youth. But Vaughn is now twenty-six and determined to prove Chaloner wrong.
A chance comes in the form of a dire scandal not of his making, and Vaughn must learn to trust Faith who, when it’s all said and done, has always known her own mind.

Author Info
Maggi Andersen lives in the countryside outside Sydney, Australia, with her lawyer husband. Her study overlooks the creek at the bottom of the garden where ducks gather. Kookaburras and cockatoos call from the trees. After gaining a BA in English and an MA in Creative Writing, and raising three children, Maggi now indulges her passion for writing.
She writes in several genres, contemporary and historical romances, mysteries and young adult novels. You’ll find adventure and elements of danger in everyone.