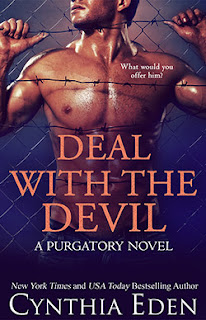 Eric Pate is used to making his own rules—as the director of the PARA Unit, he is the boss. Everyone rushes to obey his commands, and no one knows his secrets. No one ever gets too close to him. But then he meets her.

Ella Lancaster is tired of being a prisoner. She escaped one hell just to find herself in another, but Eric doesn’t consider her containment with his agents as punishment. He actually thinks it is a form of protection. But Eric is so very wrong. Ella doesn’t need protecting, not for anyone or anything.

But when the PARA Unit comes under attack, Ella and Eric both find themselves battling a supernatural beast that they never expected. Forced to join forces, to make a deal, Ella and Eric are soon fighting side-by-side, and their attraction for each other can’t be contained or controlled. Hot. Wild. Consuming. Ella’s deal with her devil is soon taking over her life.

And as Eric falls deeper and deeper under the mysterious Ella’s spell, his legendary control begins to crack. The beast that he has kept chained so carefully inside rises to the surface. Unfortunately, when the devil loses his control…there is real hell to pay. 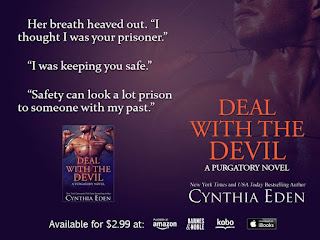 Excerpt
“Have you looked long enough?” he asked. His voice was a deep, dark rumble. Sexy.
She didn’t want to find anything about her jailer to be sexy. This attraction she had to him—it was odd. Unwanted.
But…there. Instinctive. Primal. Even her heart was already beating faster, and not just because she thought escape was at hand. Because he was close, and he stirred her.
Ella lowered her hand away from the glass. She was going to try logic with him first. She’d plead her case. Perhaps that tactic would work.
And perhaps not.
“You’ve had plenty of time to look at me,” Ella murmured. “I suppose I thought it was only fair for me to have the same opportunity.”
His jaw hardened. Just a small movement, but she saw it and Ella liked that she’d gotten to him.
“Did you think I didn’t know? I could feel it when you were close.” She motioned toward the mirror, then toward the video camera mounted near the ceiling. “I think this was all a bit…much, don’t you? I mean, I’m locked in. It’s not as if I can plot some terrible wickedness here.”
“You can plot it,” he allowed, “you just can’t carry it out.”
Ella took a step closer to him.
He offered her his hand. “It’s time we were officially introduced. My name is Eric Pate, and I’m in charge of the FBI’s Para Unit.”
She stared at his hand.
The Para Unit. There had been whispers about that group for years. Government agents who policed the creatures that went bump in the night. According to the gossip she’d heard, if a supernatural got on the wrong side of the Para Unit, well, that supernatural found his—or her—butt tossed into Purgatory.
Is Purgatory real?
Ella was very much afraid that it was.
“I don’t bite,” Eric murmured. His hand was still offered toward her.
“No.” Ella cleared her throat. “I think that’s my deal.” Because she didn’t want to show him her fear, she put her hand in his.
Heat.
Her breath caught in her throat. And, yes, she still breathed. Her heart still beat, she could still feel pain and pleasure. Despite the tales heard by so many, paranormals were still alive. They could hurt, they could feel…just like humans.
Ella had thought that the man before her was cold. Emotionless. After all, a darkness seemed to cling to him like a shroud, but when they touched—fire seemed to ignite in her hand. Her heart beat even faster, nearly racing out of control. Her breasts ached, as if wanting, needing a lover’s touch. And—
She tried to pull away.
But his hand tightened around hers. She could feel the strength in that hand.
“Is something wrong?”
Yes, you’re what’s wrong! The man before her was far from human, no matter what he wanted to pretend. And she should not be reacting to him that way. His scent wasn’t human. It was just slightly…off. Everything about him was, yet she was still feeling that pull between them. 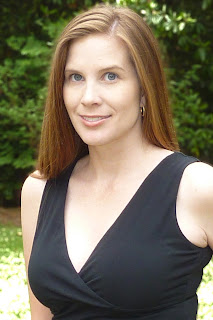 Author Info
Award-winning author Cynthia Eden writes dark tales of paranormal romance and romantic suspense. She is a New York Times, USA Today, Digital Book World, and IndieReader best-seller.  Cynthia is also a three-time finalist for the prestigious RITA® award. Since she began writing full-time in 2005, Cynthia has written over fifty novels and novellas.
Cynthia lives along the Alabama Gulf Coast. She loves romance novels, horror movies, and chocolate.  Her favorite hobbies including hiking in the mountains (searching for waterfalls) and spelunking.