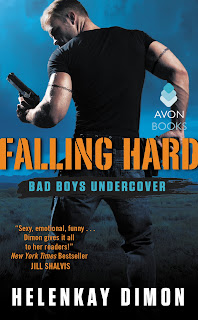 After a grueling assignment with the black ops force known as the Alliance, Weston Brown is craving downtime. Instead, he's pulled into his deadliest operation, in the one place he never wanted to see again. No-nonsense and so damn hot, Lexi Turner lied to get him to her mountain clinic in Pakistan. But the threat is terrifyingly real.

Lexi has been asking too many questions, drawing the wrong kind of attention. As soon as she lays eyes on West, she can tell he's quiet—yet tough—and has a rescue complex which will come in handy for going up against the world's most ruthless gunrunners.

Cut off from the rest of the Alliance, Lexi and West navigate the brutal terrain and a primal sexual attraction. Sticking around has never been West's way, but now he'll use every resource to keep Lexi by his side, safe from a killer who leaves no loose ends behind.

Excerpt
Breathing in, forcing the adrenaline buzzing through him to slow, West eased his grip on his gun.
The whole attack probably took less than two minutes, but it dragged in West’s head. He lived every second in slow motion. Always did.
Suddenly he was facing down the barrel of a nasty assault weapon. An AK-103 or something similarly problematic in the hands of someone aiming it at his head. To add to the fun, this one had a grenade launcher attached to it. Which was just fucking fabulous.
West’s gaze traveled over the shaking arms to the white-knuckle grip on the plastic. Then to her face. A brunette of the shockingly hot variety. Not that he cared about that on a job.
He didn’t like shooting women, but he would. He had. An enemy was an enemy, and he waited to see if that’s the tack the victim-turned-potential-attacker took.
“Two roads diverged.” She spit out the not-so-random sentence, and the dark energy spinning around the room eased.
“Well, damn,” West whispered, stunned to hear the code from her.
Josiah lowered his gun as he finished the agreed-upon signal. The one the doctor provided and insisted on, citing faulty short-term memory and a love or Robert Frost. “Sorry I could not travel both.”
She blew out a long breath as the stiffness across her shoulders eased. “Thank God you’re here.”
West tagged her as American but definitely not male, which made little sense under the circumstances. But she wasn’t firing at random, so he considered that a bit of good luck.
Still, a potential novice with a weapon was an invitation to get his nuts blown off, and he sure as hell didn’t agree to that when he signed Alliance’s employment contract. “Ma’am, I need to you put that gun down.”
She blinked a few times before her gaze went to her hands. It was as if she forgot she took it off the dead guy when he dropped it. “Why?”
West chalked the confusion up to the chaos of the last few minutes. Still, shock and bullets rarely mixed well. “I don’t want to be shot.”
Her chin came up as she nodded at him. “That makes two of us, so you lower your weapon first.”
Okay, chaos or not, her attempt to order him around was pretty fucking hot. Kind of brave, too. “No.”
Not dropping his guard, West took a second to study her. Long hair, half in and half out of a ponytail, huge whiskey brown eyes, and the sexiest pouty mouth he’d ever seen. He couldn’t make out her frame under the olive pants and oversized long-sleeve tee but he guessed curvy.
Not just pretty but lose-the-ability-to-spell sexy. Of course that could be the gun. Something about a woman holding a weapon turned him on, sick twist that he was.
“I’m not really giving you a choice,” he said, more to stall than anything else.
Josiah moved in, step by small step, as if not to scare or rattle her. Pretty soon two trained men would almost be on top of her, and then it was just a matter of time until one of them wrestled the weapon away from her.
And that’s how it would end because there was no way West was heading back home after this and listening to the shit he would get from Bravo if he let a hot brunette get the jump on him and take a shot. He had a badass shoot-anything reputation to uphold.
“At this distance I can blow your balls off,” she said,
looking ready to do just that.
Then again . . . “Okay, that’s a solid argument.”

Romancing the Readers would like to thank HelenKay Dimon for the guest post she did for us. Please give her a warm welcome!

Readers ask all the time where book ideas come from. The answer, really, is everywhere. I read about things, hear about things. Sometimes I start with a general idea or a tiny piece of information then play the “what if” game to spin it out for a book.

When I started writing FALLING HARD, or thinking about writing the book, I wasn’t 100% sure where it would take place. The undercover team in this series – Bad Boys Undercover – is made up of former military, CIA and MI6. Their cases are international. That meant thinking about where the book would unfold and what the plot would be as entwined ideas.

I read a lot of Himalayan climbing books, which is kind of odd since I’m afraid of heights. Like, I get shaky and weepy on a stepladder. The idea of climbing something like 30,000 feet into the air is beyond my understanding. Yet, I’m endlessly fascinated by the personality type that would seek out that type of adventure.

It just so happened I was reading one of those books around the time I plotted FALLING HARD. One included a reference to the “fearless five,” which turned out to be Squadron Five of the Pakistani Army. This squadron is made up of a group of pilots who engage in battles on the Siachen Glacier, the highest battleground on earth where Pakistan and India fight over boundary lines. The fearless five also perform amazing rescues on some of the highest mountains in the world, including K2.

That simple reference started me down a path. I researched the squadron, the area – Skardu, Pakistan – the clinics in the area used by climbers and locals, avalanches and a whole bunch of other issues. And that’s when I found my setting for FALLING HARD. The book isn’t actually about the Pakistani military but this area, right near the base of K2 and right in the middle of a lot of military action, proved to be the perfect place to launch Lexi and West’s story.

Add all that together and I ended up with a quiet marine hero, a chatty but determined med tech heroine, a setting that turned out to be dangerous due to both fighting in the region and the weather, and a cache of weapons that are exactly where they should not be. Welcome to FALLING HARD!

Author Info
HelenKay Dimon is a former divorce attorney turned full-time romance author. Odd transition, right? She has sold over thirty novels, novellas and shorts to numerous publishers, including Kensington, Harlequin and Penguin, Samhain, Carina Press, and HarperCollins. Her nationally bestselling and award-winning books have been showcased in numerous venues and her books have twice been named "Red-Hot Reads" and excerpted in Cosmopolitan magazine. But the best part of the job is never having to wear pantyhose.