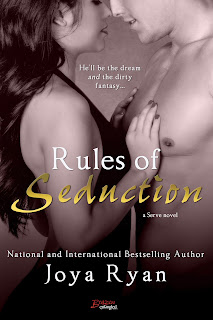 He'll be the dream and the dirty fantasy...

Nolan Hart ensures that Serve's clients get what they want, how they want it. But with one look at the curvy brunette, Nolan knows he’s the man to fulfill her desires. As the anonymous lover, he's Ava’s dirtiest fantasy. Outside of Serve, he's her charming, smartass friend.

But Nolan wants more. More than Ava is willing to give. And as long as the blindfold stays on, she'll never discover that the two men she's falling for are one and the same...
Goodreads Book Link

Excerpt
“I want to be consumed. In any way he wants to take me. Because the minute I step out of the scene, it’s over and back to the real world.”
It suddenly hurt to breathe. That sounded right up his alley. She wanted to get lost, taken over, but not in the real world. There wasn’t a man alive besides himself he’d trust not to abuse that privilege.
Then an idea struck him:
Why not me?
She wanted what he’d happily give her. In this short time, he’d already gotten a good sense for her. He could read her body, expressions, and cues.
He could take things in whatever direction the moment led. It was a dangerous notion, but he didn’t trust anyone else to have her. He’d make sure she got what she wanted without someone going too far or hurting her.
And she was offering everything. With the only catch of not seeing the man she was with. That was her one hard limit, and he could give that to her. Because if there was one thing he understood, it was hard limits.
He’d spent years wrapped up in women, moving from each one to the next in a quest to feel…anything. And every time, he found the threat of the future—unpredictable, unknowable—too powerful to ignore. How could he protect anyone longer than one scene at a time?
So he’d resigned himself to doing just that. No relationships. No chance for love. But at least he could guarantee each woman’s safety by assuring she was paired with the perfect partner.
But to have someone put themselves in his hands—literally. To trust their fate to him for more than a single scene. It sounded better than good and was the one thing he’d yearned for but seen no way to experience. Anyone who wanted him for more than one scene wanted him for a relationship, and he couldn’t have that.
He hadn’t found “the one,” and he never would. His friends were being taken down one by one with emotional monogamy, but it wasn’t in the cards for him.
This woman, though? There was a tiny gleam of something broken behind her eyes. Something she was outrunning. He could relate. She called to him in a way he couldn’t ignore. She wanted a tightly controlled scene, and because the fantasy would never escape into the real world, he could fulfill her desires and know that as long as she was with him, he would keep her safe.
“You’d let him have you. However he wanted. So long as his identity remained secret?” He had to clarify this just one more time to be sure she knew what she was asking for. Because he couldn’t turn her away, but he couldn’t turn her over to another, either.
“Yes,” she said. “I’ll leave it to him, and to you, to read me.” Her green eyes met his. “I trust you to pair me with the man I need.”
He nodded. Ava Webber had just sealed her own fate, and maybe even his own.
“Tomorrow night,” he said. “You’ll have the man you want.”

Author Info
I am a mother and a wife. I love to read, write, bake, cook, barbecue, baste, flambe'...basically anything regarding food you can assume my involvement. I also have terrible dance moves and unleash them upon the general public often.
If you want to know more about me or the books I write, come check out my site! www.JoyaRyan.com