Excerpt & Giveaway: A Kiss for Lady Mary by Ella Quinn 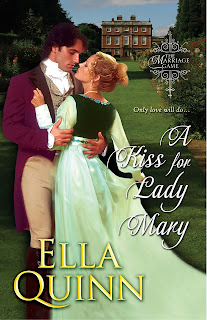 A Kiss for Lady Mary
The Marriage Game # 6
By: Ella Quinn
Releasing May 26th, 2015
Kensington Books

Ella Quinn’s bachelors do as they like and take what they want. But when the objects of their desire are bold, beautiful women, the rules of the game always seem to change…

Handsome, charming, and heir to a powerful Viscount, Christopher “Kit” Featherton is everything a woman could want—except interested in marriage. So when he hears that someone on his estate near the Scottish border is claiming to be his wife, Kit sets off to investigate.

Since her parents’ death, Lady Mary Tolliver has been hounded by her cousin, a fortune-hunting fool after her inheritance. Refusing to settle for anything less than love, Mary escapes to the isolated estate of rakish bachelor, Kit Featherton. Knowing he prefers Court to the country, she believes she will be safe. But when Kit unexpectedly returns, her pretend marriage begins to feel seductively real…

A couple of days later, Mary joined her grandmother and aunt in the dower house’s elegant but cozy morning room. Small paintings and miniatures encompassing generations of Tollivers covered the walls and surfaces. In the Queen Anne style, the furniture was old, but comfortable.

Long windows gave a view over the rose garden and the marble fountain in its center. The curtains had recently been changed from the velvet used during the colder seasons to a cerulean blue watered silk trimmed with gold braid. Even though they were experiencing one of their few warm days this spring, a log spat and popped in the fireplace.

In fact, the only disturbing part of the normally tranquil atmosphere was the conversation.

Doing her best to keep her jaw from dropping in shock, Mary stared at her grandmother. The older woman’s thick silver hair was face held few lines. Her gaze seemed as sharp as ever. Generally she was the picture of health, except for this recent burst of incipient insanity, for that was all it could be.

Mary opened her mouth, then closed it again. Several moments passed in silence as she struggled to make sense of what she thought she’d heard. After rejecting retorts such as, Grandmamma, are you feeling quite well? Or, are you sure you wouldn’t like a nice room in Bedlam? And finally unable to come up with another way to ask her question, she simply voiced the nicest thought in her mind. “Surely I have not understood you properly. You want me to do what?”

Mary shifted her gaze to her aunt. Perhaps madness had always run in the family and it had been kept a secret so as not to ruin them socially. After all, who would deliberately marry into a family where lunacy was rampant?

“He has a face like a fish.” Aunt Eunice opened her eyes wide and moved her lips in a fair imitation of a fish.

Mary closed her eyes, repressing a shudder. “I agree, but surely there must be less drastic measures I can take.”

Grandmamma leaned forward and pounded her silver-headed cane on the floor. “He may look like a fool, my girl, but he’s canny, and, if what Cook told me is true”—Mary should have expected that— “which I have no doubt it is, he almost caught you a few days ago.”

“Yes, well.” Not the cleverest of replies. Surely, she could think of something more to say. “I got away from him,” she ended lamely.

“And every other time previously.” Mary let out a frustrated huff. Unfortunately, her grandmother did have a point. It was becoming more and more difficult to evade her cousin. “Did Barham receive an answer to his last letter to Uncle Hector?”

After a few moments, during which Grandmamma turned so red it appeared as if she would have apoplexy, Aunt Eunice replied, “Yes. But it won’t serve. Barham said Hector continues to insist your father promised you would marry Gawain, and he will not release your funds until either the marriage takes place—”

“In which case that spendthrift, Gawain,” Mary almost growled, the anger in her voice surprising her, “would control everything.”

“Or you turn five and twenty.”

Her aunt’s voice interrupted her silent railing. “I’m sorry. What did you say?”

“Unless you plan to spend the next two years inside the house,” Grandmamma said, emphasizing her speech with another loud thump of her cane, “you will do as your aunt and I advise.”

Mary eyed the silver headed stick. What would her grandmother do if she hid it? Still, what they were suggesting was complete insanity. “But I—”

“He’s found you everywhere we’ve tried to hide you, my dear.”

Eunice stared at Mary, a compassionate look on her face. “Drastic times call for drastic measures.”

Mary slowly shook her head. “I don’t think I could pretend to be someone else for that long a time.”

“But you won’t have to pretend.” Her aunt beamed. “That is the brilliance of the plan! You can be yourself . . . with a slight change in your last name for the time being.”

“We’ve been very careful,” her grandmother said as calmly as if she were choosing a dinner menu, “to select a remote area where there are no important families.”

There was something very wrong about all of this. “May I ask who the owner is?”

Her grandmother waved her hand as if dismissing her question. “The less you know for time being, the safer you’ll be if Gawain comes sniffing around.”

Grandmamma tapped her cane for at least the fourth time. Mary’s fingers itched to grab the thing away and throw it in the fireplace. “It’s decided. We’ll leave early tomorrow morning.” 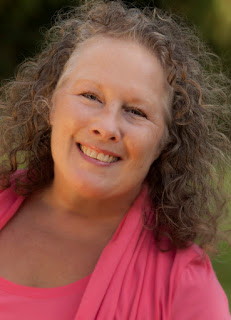 Author Info
Ella Quinn lived all over the United States, the Pacific, Canada, England and Europe before finally discovering the Caribbean. She lives in St. Thomas, Virgin Islands with her wonderful husband, three bossy cats and a loveable Great Dane.