Excerpt & Giveaway: A Good Rogue Is Hard to Find by Kelly Bowen 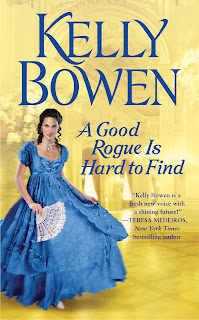 A Good Rogue is Hard to Find
The Lords of Worth # 2
By: Kelly Bowen
Released April 28th, 2015
Forever

The rogue's life has been good to William Somerhall: He has his fortune, his racehorses, and his freedom. Then he moves in with his mother. It seems the eccentric Dowager Duchess of Worth has been barely skirting social disaster-assisted by one Miss Jenna Hughes, who is far too bright and beautiful to be wasting her youth as a paid companion. Now home to keep his mother from ruin, William intends to learn what's afoot by keeping his friends close - and the tempting Miss Hughes closer still. . . .

UNTIL HE MEETS HER

He's tall, dark, and damnably intelligent - unfortunately for Jenna. She and the duchess are in the "redistribution business," taking from the rich and giving to the poor, and it's going great - until he shows up. But even as William plots to make an honest woman out of her, Jenna will use all her wiles to reveal just how bad a rogue he can be . . .

Excerpt
For a moment, Worth looked stunned. “What the hell did you drop down the front of your dress?” he snarled.
“I have no idea what you’re talking about,” Jenna replied placidly. She had gotten herself out of stickier situations than this. Distract and deflect. She dropped her hands again.
“I demand to know what you took.”
“Nothing, Your Grace.”
“You have something in the front of your dress,” he snapped.
“I have since I was twelve years old.”
Worth started in shock before he swiped his hands through his hair angrily. “You think this is funny?”
“A little.” She was forcing a sangfroid she didn’t feel.
The duke let out a string of expletives better suited to the London docks. “You have five seconds to produce whatever you have in the front of your dress, or I swear by all that is holy, I will rip your bodice in half and retrieve it for you.”
“Ah. Is this your area of expertise?”
That stopped him short. “What the hell is that supposed to mean?”
Jenna smirked at him and cocked a brow. “I thought bodice ripping might be part of your overwhelming charm.”
Worth’s eyes darkened even further. “Very well, Miss Hughes, have it your way.”
God’s teeth, he was calling her bluff, and in truth, he had every right to do so. Though she’d be damned if she conceded. “Do your worst then,” she dared.
She watched as the duke’s hands went first to her shoulders, then to the edges of her bodice. She felt the backs of his fingers brush against her bare skin as he curled them under the seam at the top of her breasts. Jenna remained perfectly still, her breath caught in her chest and her heart thundering against her ribs.
He had long fingers. Beautiful fingers, actually, covered in small nicks and scars and calluses that attested to the fact this duke understood physical exertion. And they were tracing the neckline of her dress in slow, sure movements. Her stays were suddenly suffocating. The air around her had thickened. Every muscle in her body had clenched, and it wasn’t in fear. It was in anticipation. 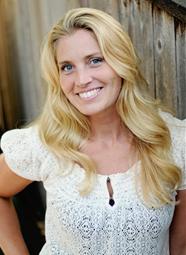 Author Info
Kelly Bowen grew up in Manitoba, Canada. She worked her way through her teenage years as a back country trail guide and ranch hand. She attended the University of Manitoba and earned a Master of Science degree in veterinary physiology and endocrinology.
But it was Kelly's infatuation with history and a weakness for a good love story that led her down the path of historical romance. When she is not writing, she seizes every opportunity to explore ruins and battlefields.
Currently, Kelly lives in Winnipeg with her husband and two boys, all of whom are wonderfully patient with the writing process. Except, that is, when they need a goalie for street hockey.