Except & Giveaway: How to Marry a Royal Highlander by Vanessa Kelly 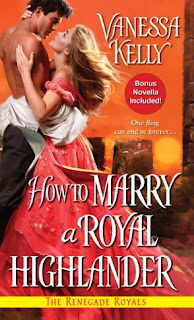 How to Marry a Royal Highlander
The Renegade Royals # 4
By: Vanessa Kelly
Releasing June 30, 2015
Zebra

Illegitimate yet thoroughly irresistible, the Renegade Royals are leaving behind their careers as daring spies for the greatest adventure of all…

At sixteen, Alasdair Gilbride, heir to a Scottish earldom, fled the Highlands and an arranged betrothal. Ten years later, Alasdair must travel home to face his responsibilities. It’s a task that would be much easier without the distracting presence of the most enticing woman he’s ever met…

After one escapade too many, Eden Whitney has been snubbed by the ton. The solution: rusticating in the Scottish wilderness, miles from all temptation. Except, of course, for brawny, charming Alasdair. The man is so exasperating she’d likely kill him before they reach the border—if someone else weren’t trying to do just that. Now Eden and Alasdair are plunging into a scandalous affair with his life and her reputation at stake—and their hearts already irreparably lost…


Excerpt
When Edie hesitated for a fraction of a second, Alec’s heart stuttered with dismay. But then her hands slipped up to his shoulders and she slowly parted her lips. He surged in, taking too much too fast, but she didn’t retreat. Instead, she tangled her tongue with his, going up on her tiptoes to meet him.
He was finally getting her measure. Edie had enough charm and confidence to launch a thousand ships. But innocence lurked behind that bold façade, as did an entirely unexpected vulnerability. Her kiss was eager, open, and without artifice. It was all Edie, wild and sweet, giving as good as she got with a heady promise of more to come.
He had every intention of taking her all the way down that road.
She let out an engaging little moan and snuggled closer, brushing her full breasts against his waistcoat. Sensation bolted through him, driving what felt like every ounce of blood down to his cock. Instinctively, he slipped his hand to her delightfully round bottom—good God, the woman was a lovely handful—and nudged her into him, flush against his erection. Then he picked her up and took a step forward, trapping her between his body and the passage wall.
Edie froze in his arms. Alec went still as well, suddenly all too aware that he was preparing to make love to a virginal spinster—in a corridor, against a wall, in broad daylight.
Jesus.
Then she came to life in his arms, and not in a good way. She jerked her head away and a funny little growl issued from her lips.
“Get off of me,” she hissed, trying to struggle her way out of his embrace. “Are you deliberately trying to destroy my reputation?”
Alec mentally sighed. He almost wished someone would catch them, since it would make things a damn sight easier for both of them, although she had yet to realize it. But now that a small portion of his blood was finally heading back to his brain, he realized what an idiot he was. If he had any hope of winning Edie over, this certainly wasn’t the way to go about it.
She was worse than a nest full of French spies when it came to playing havoc with his plans. It was time to get the situation—and her—under control.
“Do I have to kick you in the shins to make you let me go?” Her cheeks were pink and her eyes shot daggers at him. But her full mouth was rosy and damp from his kisses, and her breasts heaved against her trim bodice. She looked so damn tempting that it took every ounce of his discipline not to carry her off to the nearest empty bedroom and have his way with her.
That was the most enticing image to come into his brain in a very, very long time.
No, ever.
“Stop wriggling about like a worm on the end of a hook,” he growled.
“I cannot believe you just called me a worm,” she snapped, wriggling harder as she tried to escape.
“Oh, for Christ’s sake.” He wrapped his hands around her waist and picked her straight up off her feet. She squeaked out a startled protest, but he simply plopped her back on the padded window bench and braced himself in front of her to prevent her from bolting.
Her eyes flashed from behind her spectacles, promising all sorts of retribution, but her lenses had gone partly foggy.
“Can you even see?” he asked.
“Confound it.” She whipped off her spectacles and rubbed them on her sleeve before jamming them back on her nose.
Her gaze said quite clearly that she would like to rend him, limb from limb.
“You needn’t look at me like I’m some sort of ogre,” Alec said, “or like I’m going to ravish you right here in the hallway. I promise you, I’m not.”
She stared at him a moment longer, then looked down pointedly at the fall of his breeches. “Really? You could have fooled me,” she said.

Author Info
Vanessa Kelly is an award-winning author who was named by Booklist, the review journal of the American Library Association, as one of the “New Stars of Historical Romance.” Her Regency-set historical romances have been nominated for awards in a number of contests, and her second book, Sex and The Single Earl, won the prestigious Maggie Medallion for Best Historical Romance. Her current series, The Renegade Royals is a national bestseller. Vanessa also writes USA Today bestselling contemporary romance with her husband, under the pen name of VK Sykes.