Excerpt & Giveaway: Love in the Time of Scandal by Caroline Linden 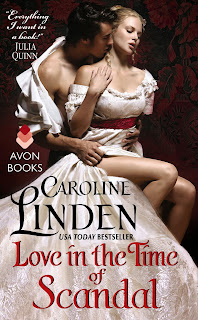 Love in the Time of Scandal
Scandalous # 3
By: Caroline Linden
Releasing May 26, 2015
Avon

Blurb
The third book in a deliciously sexy series from USA Today bestselling and RITA award winning author Caroline Linden, in which an utterly shocking book--Ffty Shades of Grey for the Regency era-- has all of London talking and gives more than one young miss a mind for scandal.

Penelope Weston does not like Benedict Lennox, Lord Atherton. He may be the suave and charming heir to an earl, as well as the most handsome man on earth, but she can’t forget how he abandoned a friend in need-nor how he once courted her sister, Abigail. He’s the last man she would ever marry. If only she didn’t feel so attracted to the arrogant scoundrel…

Once upon a time, Benedict thought he and Penelope got along rather well. But, though he needs a wealthy bride to escape his cruel father’s control, spirited Penelope just doesn’t suit his plans for a model marriage -- until a good deed goes awry, and scandalous rumors link his name to Penelope’s. She might not be the quiet, sensible wife he thought he wanted, but she is beautiful…beguiling…and far more passionate than he ever imagined. Can a marriage begun in scandal become a love match, too?

Excerpt
It was dark when his bedroom door opened. "Ben?" whispered Elizabeth nervously. "Are you awake?"
He raised his head, wincing as his back throbbed anew. "Yes."
There was a rustle and the door closed with a quiet click. "I managed to save a bit of milk." She crouched down next to his bed and held up the cup. "I think Nanny looked the other way on purpose."
He pulled himself toward the edge of the bed. From his shoulders to his hips, he ached. Awkwardly he sipped from Elizabeth's mug.
"I don't think it's fair that you got a whipping and shall have only bread and water for a week."
Benedict sighed, resting his cheek on the mattress. "It doesn't matter what we think."
"I know." Her eyes filled with tears. "I'm sorry, Ben. Samantha wanted to hold my doll Bess, but I was selfish and wouldn't let her. She pulled on Bess and I pulled back, and we both bumped into the statue, and Nanny was calling us, and—and—"
"Don't worry." He reached for her hand. She scrambled nearer and leaned her head against the bed frame beside his, clasping his hand to her cheek. "Make sure Samantha knows not to tell about Bess."
She nodded. "I will. I told her to pretend she had a nightmare and go cry in Nanny's lap while I sneaked in here with the milk. Are—are you badly hurt?"
He made a face even though his back felt like it was on fire. "Not much."
"Mother will come see you tomorrow, won't she?"
He hoped. Sometimes his punishments included being sequestered from everyone else. Elizabeth was only able to come to him because his room was still in the nursery. Benedict thought he could bear this much better if his mother would come and stroke his hair and lay cold compresses on his back and read to him. She did that when the earl was away from Stratford Court. Of course, when the earl was away, he wasn't whipped at all.
"I wish he would go to London," whispered his sister, echoing his thoughts.
"So do I." He wished the earl would go to London, or anywhere else, and stay there forever. "You should go back to bed before Nanny realizes you're here."
She held up the cup so he could finish the milk. Greedily he sucked the last of it, then gave her a little push. "Good night, Ben," she whispered next to his ear. "Thank you."
He closed his eyes as she slipped out of the room. If he hadn't taken responsibility, their father would have begun to suspect the girls. Stratford never whipped his daughters—Benedict wondered if he would when they grew older—but he would punish them in other ways. If Stratford had seen Bess lying on the stair and realized the truth, he probably would have burned the doll. That would have broken Elizabeth's heart; she loved Bess and took very gentle care of her.
In a few days his back would stop hurting. A week with only bread and water would be miserable, but he was ten, nearly eleven—almost a man, and his little sisters needed their milk and good food more than he did. With any luck, his mother would find a way to come see him and make the days pass more quickly. And on the bright side, he would be allowed to recite his lessons here, instead of standing in the school room.
But he wished, deeply and intensely, that he had been born the son of anyone other than the Earl of Stratford. 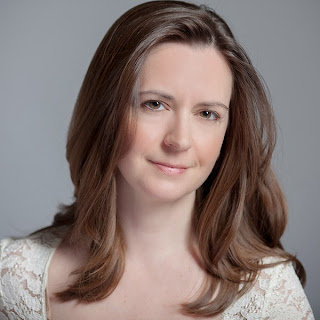 Author Info
Caroline Linden was born a reader, not a writer. She earned a math degree from Harvard University and wrote computer software before turning to writing fiction. Ten years, twelve books, three Red Sox championships, and one dog later, she has never been happier with her decision. Her books have won the NEC Reader’s Choice Beanpot Award, the Daphne du Maurier Award, and RWA’s RITA Award. Since she never won any prizes in math, she takes this as a sign that her decision was also a smart one. Visit her online at www.carolinelinden.com.