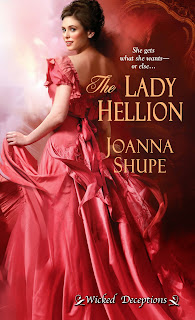 Blurb
A Marquess’ daughter, Lady Sophia Barnes doesn’t take no for an answer. Especially when she’s roaming London’s seedy underground…dressed as a man.

A rabble rouser for justice, Sophie’s latest mission is to fight for the rights of the poor, the wretched—and the employees at Madame Hartley’s brothel. She’s not concerned about the criminals who will cross her path, for Sophie has mastered the art of deception—including the art of wearing trousers. Now her fate is in her own hands, along with a loaded gun. All she needs is instruction on how to shoot it. But only one person can help her: Lord Quint, the man who broke her heart years ago. The man she won’t let destroy her again…

The last thing Damien Beecham, Viscount Quint, needs is an intrusion on his privacy, especially from the beautiful, exasperating woman he’s never stopped wanting. A woman with a perilously absurd request, no less! For Damien is fighting a battle of his own, one he wishes to keep hidden—along with his feelings for Lady Sophia. Yet that fight is as hopeless as stopping her outlandish plan. Soon all Quint knows for certain is that he will die trying to protect her…

Lord Quint never sputtered. He did not fluster or ever forget himself. Logical, reasonable, and maddeningly unflappable, she knew the viscount could be counted on to keep a level head. It was one of the things Sophie liked best about him.

So when his jaw dropped, she braced herself.

“Your second?” Quint’s brows flattened. “You need me to serve as your second? For a duel? As in, ten paces in a field at dawn?”

“And with whom in the name of Heracles would you be dueling?”

She nibbled her lip. What were the chances she could avoid explaining it before he agreed? “Does it matter?”

He traveled around the bulk of the desk and stopped in front of her. Though she was on the tall side, he was a few inches taller. She liked that he didn’t loom over her. It allowed her to better see his face, and he had an interesting face. Astute brown eyes with golden flecks. A strong, angular jaw. High, sharp cheekbones that set off a nose too masculine to ever be called pretty.

His hair was shaggy, his clothes rumpled and appallingly ill-matched. No, he did not inspire swoons in the ballroom, but perfection had never interested Sophie.

And there was the root of the problem.

The man was intelligent in ways most people couldn’t even comprehend. They thought him odd. Unsocial. Aloof. He never danced or paid afternoon calls. But those opinions, if he even paused to hear them, didn’t affect him as far as Sophie could tell. He exuded confidence, unshakable beliefs that were based on well-researched facts. His ability to recall the smallest detail he’d read fifteen years ago fascinated her.

Quint folded his arms across his chest. “Yes, it very much matters. And it’s not as if you can hide the other party’s identity, if I’m to serve as your second—unless you plan to blindfold me. But all of that is irrelevant as I cannot, in good conscience, allow you to go through with a duel.”

Without a cravat, the strong column of his throat shifted and rippled as he talked, and she was reminded that she’d once had the opportunity to experience the power in his lithe frame. Had once shivered as he’d clutched her so tight she could hardly breathe.

But that was long ago, years now, all before he’d fallen in love with someone else. A lump formed in her throat, regret nearly choking her, but she forced it down. “And I cannot see how you can possibly prevent it. I do not need your approval.”

Cocking his head, he studied her with shrewd scrutiny. “What happens if I say no?”

She lifted a shoulder. “I shall muddle through somehow.”

“If you do, your reputation will suffer.”

“My reputation has already suffered—which is why I have accepted the challenge. To repair it.”

He huffed a seemingly exasperated laugh. “That is ridiculous.”

“Oh, because I’m a woman I cannot have honor?”

“I never said that. Women can duel if they so choose, as far as I’m concerned. Stupidity is not ascribed to gender. What’s ridiculous is thinking no one will learn of it. Nigh on impossible to keep a duel private these days.”

“Yes, but you won’t tell anyone. Neither will I, for that matter.”

“Your opponent might, as could the surgeon who is taxed with removing a ball from your chest. But it hardly matters because I cannot serve as your second.”

A flush stole over his cheekbones. Was he embarrassed? She’d never, ever seen him blush. “Cannot,” he said. “And you’d better not go through with it.”

Intolerable, high-handed males. Sophie had suffered them her whole life. Between idiotic rules and unrealistic expectations, an English woman’s life was more constricting than stays after a five-course meal. “I must. And will you tell me why?”

“No. Will you tell me why you need to duel?”

He shifted, coming close enough to send her pulse racing. She could see the rise and fall of his chest, the shadow of tomorrow’s beard on his jaw. Strong, wide shoulders, lean waist. Heat radiated off his body to warm her in all the places ladies never mentioned—places that Sophie happened to like quite a bit. He was such a complicated specimen of brains and brawn, a combination she happened to find particularly appealing.

Not to mention he had full, strong lips that she knew firsthand were quite adept at turning a woman’s insides to jelly. Well, hers, at least.

“Cannot, or will not?” he asked, refocusing her attention.

She hated having her words turned around on her, so she ignored the question altogether and sidled away. “Will you at least teach me how it’s done?” She peered at the stack of books on the floor behind his desk, the ones he’d hidden when she entered. They were all medical journals on . . . diseases of the brain. Every single one. Now why hadn’t he wanted her to see those?

“Dueling? You want to learn how to stand on a field and shoot at another person?”

She glanced up at him. “Yes. I’ve never even fired a pistol before.”

“Firing is not the hard part. Hitting something is the trick.”

“I thought the point of a duel was to miss.”

“Deloping is considered ungentlemanly. Have you not even read the Code Duello? The point of a duel is to restore your honor while not getting yourself killed. And to place your bullet where it will do the least damage.”

“See how little I know? You can teach me.”

“No. I cannot involve myself in this. You should merely apologize to whichever lady you’ve slighted and end it.”

“It is impossible to apologize. And why can you not be involved?”

He placed his hands on his hips. “Many reasons. Six, to be precise. Would you like them in alphabetic order or order of importance?”

She sighed. This was going badly. She had no one else to ask, no one with a chance of keeping her secret. And she and Quint were friends . . . of a sort. Based on their previous history, she’d thought he’d agree. That he would, at the very least, want to protect her. What could she do to convince him?

“Fine. I shall ask someone else.”

He quirked an eyebrow, his expression too knowing, drat him. “And whom shall you enlist in this tutelage?”

She rapidly searched her brain for a name, for any bits of gossip she’d overheard. “Lord MacLean has been rumored in a number of duels. He must know the way of it.”

“And he’s a rake. Burned through the entire lot of Edinburgh innocents and had to come to London just to ravish more. Your reputation would never survive it.”

“That hardly signifies.” In more ways than one. “I merely want the ins and outs of the thing. And if you will not show me, I will find someone who can.”

His jaw hardened, but his eyes burned into her, churning with an emotion she’d never seen before. Was it . . . doubt? It gave her pause. Quint moved about the world with ease, with no need to question himself because he was rarely wrong. Any criticisms he encountered were for matters he cared little for, such as the unfashionable length of his hair or his appalling sartorial sense.

“Then you must do whatever you feel necessary,” he finally said, reaching to knead his temples with his fingertips. “I apologize I am unable to fulfill your request. Taylor will see you out.” He bowed and then headed for the door.

She watched him go, stunned at both his rudeness and the expression on his face.

“Quint,” she called to his back. He stopped but did not turn. “Are you all right?”

“Never better,” he answered and disappeared into the corridor.

“No,” she whispered into the empty room. “Somehow I think not.” 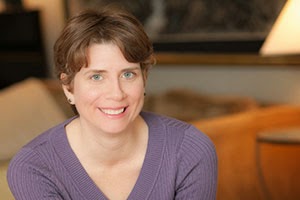 Author Info
Award-winning author JOANNA SHUPE has always loved history, ever since she saw her first Schoolhouse Rock cartoon. While in college, Joanna read every romance she could get her hands on and soon started crafting her own racy historical novels. She now lives in New Jersey with her two spirited daughters and dashing husband.