Excerpt & Giveaway: At the Spy's Pleasure by Tina Gabrielle 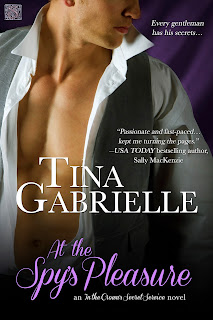 At the Spy’s Pleasure
In the Crown’s Secret Service # 2
By: Tina Gabrielle
Releasing May 26th, 2015
Entangled: Scandalous

Every gentleman has his secrets…

London 1821
After years of marriage to a selfish man who preferred gambling to his young bride, Jane, the widowed countess of Stanwell, now seeks what she was long denied-a satisfying lover. Naturally, a lady needs a list of eligible candidates, which doesn’t include the dangerously handsome (if far too arrogant) Gareth Ramsey…until he steals a sinful kiss from Jane’s all-too-willing lips.
Reputed as an arrogant barrister, Gareth’s real occupation is as a spy in the service of His Majesty, and his suspect is on Jane’s list of possible lovers. With her life in danger, there’s no safer place for Jane than with him-and in his bed. But Jane is as distracting as she is infuriating, and keeping her by his side while he pursues his mission might just endanger them both…

Excerpt
Footsteps sounded behind Jane. She quickly pasted a smile on her face and turned to greet her escort.
Gareth Ramsey entered the theatre box instead.
Shock flew through her, and she jumped to her feet. “What the devil!”
“Shh.” He grasped her arm and pulled her deep into the theater box, behind the curtains, away from any prying eyes. He wore a dark blue coat that heightened his ruggedly handsome features. Her heart hammered foolishly as a shudder heated her body at his nearness.
She tugged on her arm. “You’re insane! This is entirely improper,” she hissed.
“No one can see or hear us.”
“My escort will return,” she protested.
“Not for a while.”
“How on earth could you know that?”
“I know,” he said, a cold edge of irony in his voice.
Gareth Ramsey was arrogant and infuriating. He was also a tall dark-haired devil who brought her senses to life. “You can’t keep pulling me into secluded corners at your whim.”
“You never answered my question in the park.”
Her mind faltered. “What question?”
“Why choose Simon Marbury to be your future lover?”
She was caught off guard by the sudden intensity of his gaze. He’d barged into a private box and hauled her behind a curtain just to ask her that?
“It’s none of your concern. Besides, why should you care? You’re escorting a lady tonight.” Her voice sounded shrewish to her own ears.
He arched a dark eyebrow. “Jealous, are you?”
“Never. Just pointing out a fact.”
“She’s my cousin.”
She looked at him in disbelief. “Your cousin? Don’t you dare treat me like a fool—”
“You are jealous.”
Narrowing her eyes, she pointed to the exit. “Get out.”
“Not without a price.”
“A price?”
“A kiss.”
She gasped. “You arrogant oaf!”
He pulled her into his arms.
As soon as he touched her, her skin sizzled and she felt an immediate and total attraction. Panic followed, welling in her throat. “We will be discovered.”
“No, we won’t.”
She looked up into his eyes. “Why do you insist upon a kiss?”
Reaching out he, trailed a finger down her cheek. “You intrigue me. I want to be your lover. Burn your list, Jane. Let me be the one.”
Her heart raced. She watched in fascinated horror as he lowered his head. His lips were soft and warm as they brushed hers. She should push him away. Instead a blast of heat skittered along her nerves and her lips parted. He took advantage and thrust his tongue inside to explore her mouth. Her hands settled on his shoulders and his muscles flexed beneath her fingers. He groaned and pressed her closer.
She gasped as her soft curves molded fully against the hard planes of his body. It felt forbidden and delicious and she wanted more. She forgot they were hidden behind a curtain and that her escort could return at any moment. She forgot everything but the pleasure of his kiss.
He would be skilled, no doubt. But she couldn’t trust him. She would never trust any man again. Every instinct in her body told her that Gareth was dangerous. Not in a physical sense. She didn’t fear his strength and size, but there were other kinds of wounds, emotional ones, and she’d sworn never to allow herself to lose control of her emotions again.
No. An affair with Gareth Ramsey would be perilous.
Breaking the kiss, she pushed against his hard chest. “No,” she said as firmly as she could.
He pulled back, his eyes dark with desire. “Then I insist on pursuing you and changing your mind.”
Her composure was a fragile shell around her. He made her feel weak and warm and she had to put an end to these feelings once and for all.
Her chin jutted forward, and she met his eyes. “Suit yourself, Mr. Ramsey. But your efforts will lead you nowhere.”
“A challenge, Jane? I accept.” 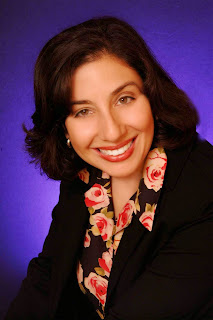 Author Info
Tina Gabrielle, an award-winning author, is an attorney and former mechanical engineer whose love of reading for pleasure helped her get through years of academia. She's the author of adventurous Regency romances In The Barrister's Bed, In The Barrister's Chambers, Lady Of Scandal, and A Perfect Scandal from Kensington Books. "A Spy Unmasked" is the first book in her new Regency romance series, "In The Crown's Secret Service," and will be released from Entangled Publishing on November 10, 2014. "At The Spy's Pleasure" will be available in April 2015. Tina's books have been Barnes & Noble top picks, and her first book, Lady Of Scandal, was nominated as best first historical by Romantic Times Book Reviews.