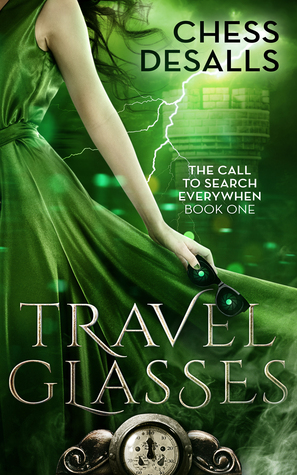 Travel Glasses
(The Call to Search Everywhen #1)
by Chess Desalls

Calla Winston’s mobile devices sit in a corner of her room, covered in dust. Weeks ago, she shared photos and laughs with her best online friend. Now, after having felt the sting of betrayal, she prefers being hidden and friendless. She equates privacy with security and technology with pain.

Then she meets Valcas, an otherworldly time traveler who traverses time and space with a pair of altered sunglasses. When an ethereal being knocks Calla to the ground near her family’s lakeside cottage, Valcas uses the Travel Glasses to help her escape. He offers his further protection in exchange for a promise. Intrigued by Valcas and the possibility of time travel, Calla accepts. That is until she learns that his search for her was no mere coincidence.

Calla sets off on her own, taking the Travel Glasses with her. Torn between searching for her estranged father and reuniting with the rest of her family, she tracks down the inventor of the Travel Glasses in hopes of discovering more about Valcas’ past and motivations. The Travel Glasses take Calla’s mistrust of technology to all new levels. But without them, she’ll never make it back home. With Valcas hot on her trail, Calla hopes to find what she’s looking for before he catches up.

The Call to Search Everywhen is a serial series of novel-length installments. Travel Glasses is YA fantasy filled with metafiction and other literary twistiness. It's a thought-provoking narrative about trust, relationships, reality and illusion.

Many thanks to the cover design team at www.damonza.com for the beautiful new cover art.

THE FIREPLACE glowed and crackled behind me as the light of the flames reflected off of Valcas’ lenses. I sipped tea while sitting cross-legged on a sleeping bag.

“Time travel is possible and has been in operation for a long time,” he began. “There are at least two known methods of travel. This,” he said as he removed his glasses and handed them to me. “Is my way.”

Valcas’ sunglasses did not look extraordinary. They were large enough to block light from the front and sides. Both the frames and lenses were of a similar black opaque material, light and smooth like plastic. The tops and sides of each rounded rectangular lens were shuttered. I turned the glasses in my hands, looking them over, expecting to see a power switch and control buttons. There weren’t any. Still holding the glasses in my hands, I looked up at Valcas—I was finally going to see his eyes. When I did, I froze.

Transfixed, my eyes locked onto his. I couldn’t move them away no matter how hard I tried. Green and brown were both wrong. Valcas’ eyes were of the palest blue I’d ever seen, a milky silver-blue, with an iridescent shimmer. Too eerie to be beautiful, they appeared fake, unnatural, like holographic images fixed onto his face.

Valcas grabbed the glasses out of my hands and covered his eyes. “I’m sorry. I should have warned you first.”

For some reason it bothered me when he sounded pained.

“How am I supposed to help you?” I asked.

His brows furrowed. “I’m not sure how to explain it, but I need someone to pose as my betrothed. It would be purely ceremonial. I’m in a tight situation.”

I frowned. “And that thing that was after me?”

“It means that you can never go back home to the lake. It could find you there again. If you come with me, I can make sure you’re protected from it.”

At this point my eyes burned and head ached. It was getting late, and I had a lot to think about. “I…well, I need some sleep.”

“Of course,” Valcas replied as if he’d decided the matter. “There will be plenty of time to discuss the specifics tomorrow morning.”

Exhaustion set in quickly once I got settled in the sleeping bag. I didn’t dream that night, but before I fell asleep, my thoughts wandered back to the dark glasses and those eyes.

Chess Desalls recently authored the first two installments of the YA time travel series, The Call to Search Everywhen. She's a longtime reader of fantasy and sci-fi novels, particularly young adult fiction. When she's not reading or writing, she enjoys traveling and trying to stay in tune on her flute. 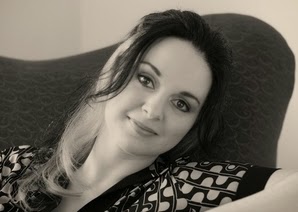 You can find Chess at