Review & Giveaway: Only In My Dreams by Darcy Burke 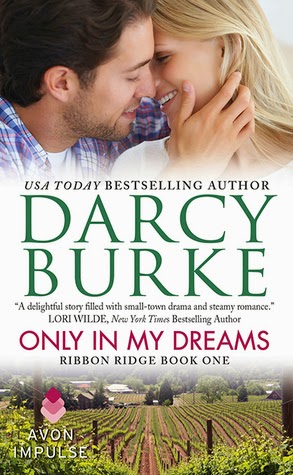 Only In My DreamsRibbon Ridge # 1
By: Darcy Burke
Releasing February 17th, 2015
Avon Impulse

Fed up with her self-imposed single life, successful event planner Sara Archer heads to a bar for a night of dancing … and bumps into Dylan Wescott, the high school crush she hasn’t seen in years. A little harmless flirting leads to a hot, completely uncharacteristic one-night stand; but when she wakes up alone, Sara knows her life is too complicated for a relationship and there can’t be a repeat.

Dylan, a divorced, ex-military construction contractor, limits himself to casual flings—his failed marriage proves he’s better off alone anyway—but he can’t stop dreaming about Sara. And when his firm is hired to oversee the renovation project run by the Archer siblings, Dylan and Sara are unable to resist their explosive chemistry.

But when their secret affair grows beyond “friends with benefits” and neither is willing to admit they want more, family drama and emotional scars may ruin their chance at a love they believed was only in their dreams.

Excerpt
“You should run screaming in the other direction. I’m bad news.”

The way he lowered his voice to deliver his warning made her toes curl. “Why? You can’t drop a bomb like that and not explain it.” She finished her lemon drop.

He eyed her empty glass. “Another round?”

She hadn’t planned on more than one drink tonight, but she could handle one more. Besides, the evening was becoming far too interesting to bail now. “Sure. But talk.”

He signaled for the server who came and took their order. Exhaling, he leaned back against the wall. “You seem like a nice person. I’m . . . just a fun-loving guy looking for a good time now and again.” His gaze was guarded, but seemed to smolder anyway.

“So you pick up girls in bars a lot?”

He smiled enigmatically, his eyes never leaving hers, as he picked up his glass. “Occasionally.”

She ran her fingertips along the smooth stem of her glass. “Is that what you’re doing tonight?”

“I hadn’t decided until now. But I guess it’s ultimately up to you.” The look he gave her as he set his empty glass on the table nearly ignited her into a ball of flames. No guy had ever looked at her like that. Like she was something good enough to eat. Author Info
Darcy Burke is the USA Today bestselling author of hot, action-packed historical and sexy, emotional contemporary romance. Darcy wrote her first book at age 11, a happily-ever-after about a swan addicted to magic and the female swan who loved him, with exceedingly poor illustrations.
A native Oregonian, Darcy lives on the edge of wine country with her guitar-strumming husband, their two hilarious kids-who each seem to have inherited the writing gene in some form-and two Bengal cats. In her "spare" time Darcy is a serial volunteer enrolled in a 12-step program where one learns to say "no," but she keeps having to start over. Her happy places are Disneyland and Labor Day weekend at the Gorge.


Only In My Dreams is the first book of Darcy Burke that I have read. I will tell you that it won't be the last. I very much enjoyed it and can't wait for more books in the series. I'm not sure how Avon does it but they always have such great new and slightly published authors. I think you'll find Only In My Dreams to be well-written with great characters, a little humor and some sadness too. It has everything you want in a good book. I so liked Sara and Dylan. Sara has a few issues that you will learn about when you read the story that make living life to the fullest somewhat hard, not impossible, just harder. Not that she lets that stop her. Now don't think that it's only Sara, Dylan has a few things he needs to work out too. Oh the romance of a trouble soul! You will love the interaction of Sara's family as they are dealing with their loss. So much happens in this story that you won't be able to put it down for fear you'll miss something. Happy reading!