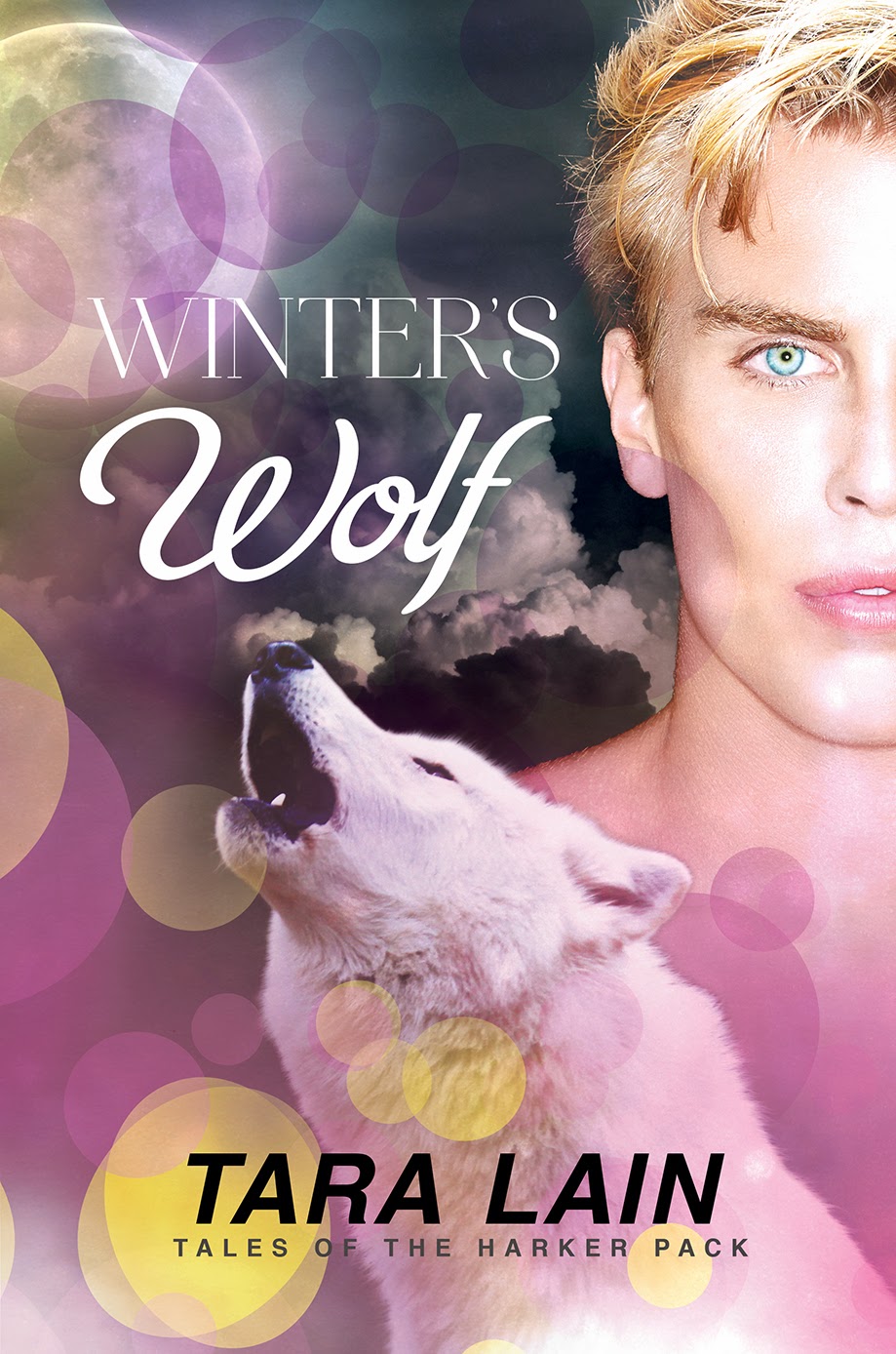 Winter's Wolf
(Tales of the Harker Pack #3)
By Tara Lain

Blurb:
Winter Thane was raised on the two cardinal rules of werewolf existence: don’t reveal yourself to humans under penalty of death, and there’s no such thing as a gay werewolf. It’s no surprise when his father drags him from his wild life in remote Canada back to Connecticut to meet his old pack in hopes it will persuade Winter to abandon his love of sex with human males. Of course Dad’s hopes are dashed when they come face-to-face with the gay werewolves in the Harker pack.

Winter takes one look at FBI agent, Matt Partridge, and decides bird is his favorite food. Partridge is embroiled in an investigation into drug dealing and the death of a fellow agent. He can’t let himself get distracted by the young, platinum-haired beast, but then Winter proves invaluable in the search for clues, a move that winds them both up in chains and facing imminent death. Winter quickly learns his father’s motives are questionable, the pack alphas are a bunch of pussies, humans aren’t quite what they seem, and nothing in the forests of Connecticut is pure except love.

Walk slowly. Look casual. Matt left the way he’d come—out the back door. When his feet hit dirt, he jogged away from the club and ducked behind the shed that had been built on the edge of the forest.
Going to die. Heart can’t beat this hard and survive.
He leaned against the shed and gasped for breath, but his cock had grown to the size of a monster, stealing all his oxygen. Think. What the fuck are you doing? No reasonable human being could believe that Winter Thane wanted Matt Partridge, so there had to be an ulterior motive. The dude had asked the marshal about him. For all Matt knew, Winter could be involved in the disappearance of the agent. Maybe he wanted to discredit Matt or—maybe he had something to do with the weird wolf stories. Jesus, the only man he’d ever seen who looked more like a wolf than Cole Harker had to be Winter Thane. Those eyes. Even his teeth were sharp. All the better to eat you with. He closed his eyes and banged his head against the metal siding. Those teeth scraping his cock—
“Dreaming of me?”
Matt’s eyes flew open. “Shit! How did you get here?”
He looked over his shoulder. “Like you said. Out the front, around the side.”
“But I didn’t hear you.”
He grinned. Oh yes, those teeth glistened. “I’m sneaky.”
Matt took a breath, pushed away from the shed, and walked a couple of steps toward the trees. Need distance. “Look. I don’t mean to lead you on, but I’m with the FBI and this isn’t a good idea—”
The hand that gripped his shoulder must have been iron. In one move, Winter grabbed him, pulled him against a body so hard and hot it penetrated Matt’s jacket on contact, hauled Matt’s head back, and covered his mouth in a devouring kiss.
Tongue. Teeth. Perfection.
Winter held Matt’s head both hard and gentle, like he wanted to control him but didn’t want to hurt him. Oh God, so nice. He tasted like beer and smelled like—what? Musky and clean at the same time, like Matt’s dog Buster when he was freshly washed. Man, he wanted to bury his nose in Winter’s neck like he did with Buster.


Winter reduced the speed and intensity of the kiss from fast food to a gourmet meal. He licked and nibbled, tasted and savored, his tongue a finely tuned instrument exploring every cranny of Matt’s mouth. He’d never been so completely kissed. So much so that even the screaming pressure of his cock couldn’t make him want Winter to move on. Matt twined his arms around Winter’s neck. Standing only six feet, he couldn’t get his cock to meet Winter’s, but the prod of that big rod against his belly made him want to beg. He pulled his mouth away an inch. “I should arrest you for carrying a lethal weapon.”

Tales of the Harker Pack Series