After surviving hell not once, but twice, Jade Moore is once again living, but her nights are filled with torture as she relives her time with the Condemned Warriors again and again. The only person capable of chasing away those demons is Viper, the man she has fallen deeply in love with. He is not just her hero, he is her destiny.
Viper’s troubled past makes him the cold, heartless killer that everyone fears. Then he met Jade, falling helplessly in love with her. As he helps Jade overcome her demons, he reveals his own, not knowing if he will lose her forever. But it isn't his past he should be worried about, it’s his future.
Shadow returns to Rockingham to be with the girl he has loved since they were kids, only to find she is in love with another man. He is determined to win the heart of the only girl he has ever loved, no matter the consequences. When secrets are revealed and tragedy strikes, will he put aside his desires and be the friend Jade needs?
Lives will be lost and heartache will be inevitable.

WARNING
This book is intended for Adults 18 years of age and over due to graphic scenes involving sex, language, and violence.

Destined is Book 2 in the Satan’s Rebels MC series and is not a stand alone novel. This book ends in a cliffhanger and there is no HEA (you will have to wait for Book 3 for that). Proceed at your own risk - you have been warned. 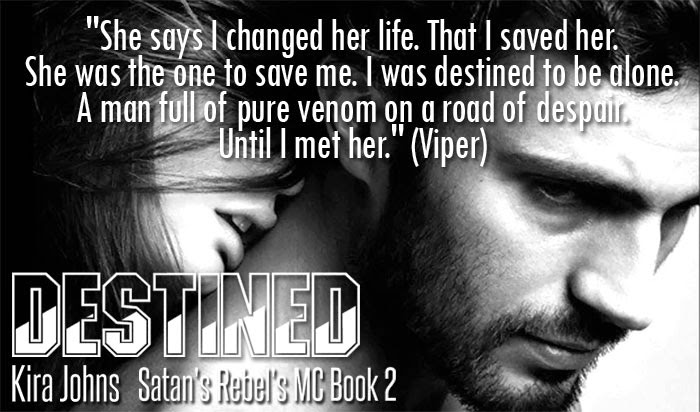 Kira Johns was born and raised in the south, where she works as a paralegal. When she's not working or writing, Kira spends her free with her husband, children and pets. She enjoys spending time outdoors, whether on a boat or on the back of a bike. Kira, her husband and children are all avid competition shooters.
Her first book, Destroyed, was released in August 2014. The second book in the series, Destined, is set to be released September 2014, with the final book, Deserved due by the end of 2014.


Also check out Book 1 for a great price! 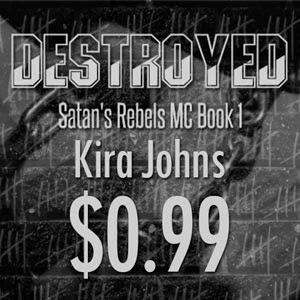 Jade Moore was no stranger to the MC lifestyle. Growing up the daughter of the President of the Satan's Rebels, she knew all about family and loyalty. Her world slowly crumbles when she loses not only her parents, but her brother and best friend. Her Uncle steps in and becomes the family she so desperately needs.

But what happens when the only family you have left betrays everything you have ever known?

Jade is drug into the Condemned Warrior world where she is imprisoned for four agonizing years. Beaten and brutalized, she wishes for death, but it never comes.

Reaper inherited the MC from his brother, Halo, and will do whatever it takes to keep the club safe. Anything, including handing over his niece to the club's enemy. All he has to do is convince her brother, Tank, and best friend, Shadow, that she has run away. Easy. But what Reaper never expects is for Tank and Shadow to come home looking for answers years later and discovering the truth.

Tank and Shadow return to their hometown to investigate missing funds. It's when they begin digging for the evidence, they discover a much darker secret that Reaper has been hiding. Enlisting the help of the club's Sergeant at Arms, Viper, they set out to rescue Jade and bring her home where she belongs.

Viper's reputation is well known both inside and out of the MC. He is a cold-blooded killer, incapable of any feeling but hatred. His allegiance lies with Tank and the club. He will do whatever it takes to bring Jade home, even if it means crossing enemy lines to save her. What he doesn't expect is to fall for her.This book is intended for Adults 18 and over due to graphic scenes involving sex, language, and violence. This novella is book one in the Satan''s Rebels MC series.