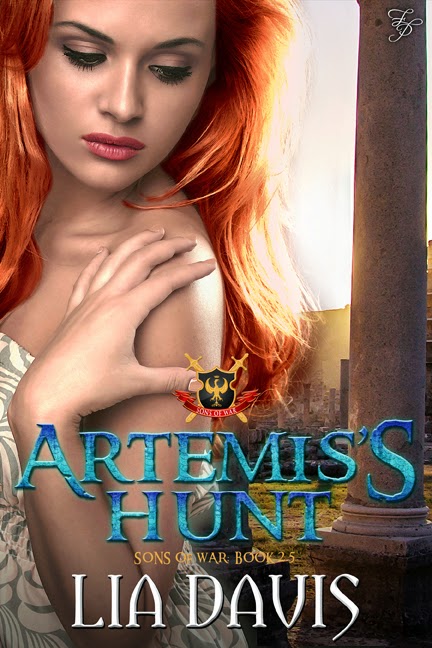 Artemis, goddess of the hunt, has lived with heartache for the last fifteen hundred years, believing her only love is dead. That’s what her father—Zeus, king of the gods—told her. After recent events brought the truth to light, Artemis must gather the courage to face her lost love again.

Evangelos, former god of messengers, was content living in the mortal world until he discovered he has a daughter and her mother is Artemis. When the goddess shows up at his place of employment with tales of renewing his god status, he’s skeptical. Zeus wouldn't reverse the curse out of the goodness of his heart. There is always a catch. The god king wants something in return.

When Artemis explains she has to hunt down her stepmother, Hera, in order to get Evan back into Zeus’s good graces, Evan demands to accompany her. However, the journey turns out to be a test that could bring them closer together or tear them apart forever.

Artemis crept through the darkening forest, her bare feet barely making a sound as she hunted her prey. The scent of damp earth and spring wildflowers filled the air. The thump, thump of her heartbeat and that of the deer hiding amongst the foliage a few feet away were the only sounds.

The doe’s head rose above the brush, her ears flickered as she carefully stepped forward. Artemis stilled, slowly pulled an arrow from her quiver and drew her bow. Before she could fire, the animal jerked her head toward Artemis, then took off in the opposite direction.

A familiar, masculine scent mixed with that of forest and earth met her nose. Annoyance bathed her, turning to anger as she twisted sharply to face the intruder. Evangelos, minor god of the messengers, stood a few feet away, his own bow at the ready. She snarled, glancing from the bow to the smug look on his face.
“I thought Hermes taught his sons better manners. Don’t you know it is dangerous to sneak up on me during a hunt?”

One large, bare shoulder rose in a lazy shrug as he stalked closer. She planted her feet in place, refusing to show him any type of weakness—he would never know how her body heated when he was near, something she hadn’t experienced with any other man.

She was a pure goddess, untouched by the desires of the flesh, and she would stay that way. Not even Evangelos could change who she was or her nature.

He stopped a foot away, the heat from his virile body reaching out to her, coaxing her to come closer. “I want you to teach me to hunt.”

Steeling her spine, she narrowed her gaze at him. “You can already hunt.”

“Not like you. I want you to show me your way.”

He took a step nearer. She desperately wanted to move away, but giving up ground would be a sign of weakness. “Does the reason matter?”

No, it didn't matter. She couldn't care less why he wanted her to teach him. “What do you offer me in return?” He had to know asking a boon of her meant she’d require some sort of payment in exchange.

One corner of his mouth lifted, drawing her attention to his full lips. What was wrong with her? She must be ill. It was the only reasonable explanation for her reaction to him. When he spoke, his tone softened, almost to a whisper. “I offer my services to you during the time it takes you to teach me.”

Suspicion crawled up her spine. “What services?”

He closed the distance between them until only a breath separated them. “Anything you wish, my goddess.”

She was fully unprepared for what happened next. When his soft lips brushed hers, every nerve in her body lit up as if charged by lightning. For a moment she allowed his testing caress, but when he wrapped an arm around her waist, she broke the kiss and slapped him. The sound of the strike echoed off the trees as his head whipped to the side, thunder to emphasize the storm he’d awakened with his touch.

“Do that again and I’ll kill you,” she warned.

Lia Davis is the author of the bestselling shifter series, Ashwood Falls, a mother to two young adults and three kitties, a wife to her soul mate, and co-owner to Fated Desires Publishing, LLC. She and her family live in Northeast Florida battling hurricanes and very humid summers. But it’s her home and she loves it!

An accounting major, Lia has always been a dreamer with a very active imagination. The wheels in her head never stop. She ventured into the world of writing and publishing in 2008 and loves it more than she imagined. Writing is stress reliever that allows her to go off in her corner of the house and enter into another world that she created, leaving real life where it belongs.

Her favorite things are spending time with family, traveling, reading, writing, chocolate, coffee, nature and hanging out with her kitties.


You can find Lia at