Excerpt: What a Wallflower Wants by Maya Rodale 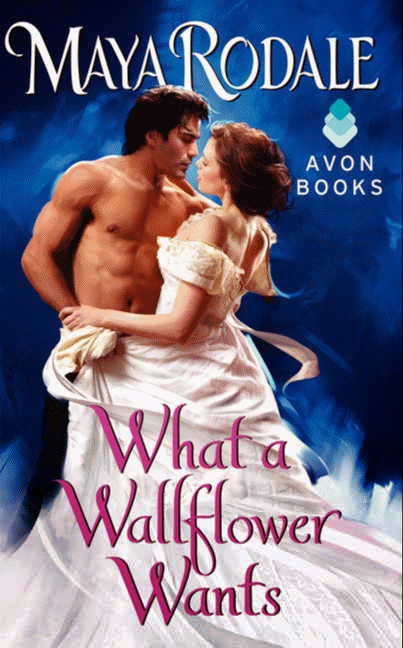 What a Wallflower Wants
by
Maya Rodale

Everyone knows that she’s the only graduate from her finishing school to remain unwed on her fourth season—but no one knows why. With her romantic illusions shattered after being compromised against her will, Prudence accepts a proposal even though her betrothed is not exactly a knight-in-shining armor. When he cowardly pushes her out of their stagecoach to divert a highwayman, she vows never to trust another man again.

John Roark, Viscount Castleton, is a blue-eyed charmer with a mysterious past and ambitious plans for his future—that do not include a wife. When he finds himself stranded at a country inn with a captivating young woman, a delicate dance of seduction ensues. He knows he should keep his distance. He definitely shouldn’t start falling in love with her.

When Prudence’s dark past comes back to haunt her, John must protect her—even though in doing so, he risks revealing his own secrets that could destroy his future.

Mini excerpt from What a Wallflower Wants


Miss Prudence Merryweather and Viscount Castleton find themselves stranded at a country in...with secrets. There is only one thing to do: he asks her to dance.


“Just one dance…that is all,” Castleton said. “I promise I won’t get any ideas.”

Prudence gazed up at him. Too bad she couldn’t explain why she was so hesitant. She was wasting her life, letting this fear hold her back. There was a handsome man before her, who had shown her nothing but kindness, and all he wanted was a dance. The truth was: she yearned in her heart of hearts to dance with him.

“All right,” she said softly.

The last time she placed her hand in another man’s it was the beginning of the end.

They began to dance.

She did not, as she feared, forget the steps. Hours and hours of her life spent practicing them so when this moment came—waltzing in the arms of a handsome man—she could move in time to the music without counting to three and so she could look into smoldering gaze instead of at her feet.

Prue forced her breath to be even. In. Out. In. Out. She willed her heart to beat in a steady rhythm as she tried to reclaim power over her emotions and fears.

Castleton’s gaze settled on her face. She peered up at him. This time she really looked at him focusing on his mouth, which was firm, sensual and smiling encouragingly.
Avon Exclusive Excerpt