Here we are at another anniversary of 9/11 lets thank all the good men and woman that work to keep us safe and free and remember those lost to us!

On a happier note today we are talking books with military theme to them. I prefer to read my romance when the military character is not active. It's a personal preference. So lets talk about some of my favorite books where the characters at one time were active in the military.

One of my new favorites is... 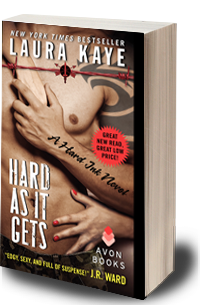 Hard As It Gets
by
Laura Kaye
Hard Ink

Trouble just walked into Nicholas Rixey’s tattoo parlor. Becca Merritt is warm, sexy, wholesome–pure temptation to a very jaded Nick. He’s left his military life behind to become co-owner of Hard Ink Tattoo, but Becca is his ex-commander’s daughter. Loyalty won’t let him turn her away. Lust has plenty to do with it too.
With her brother presumed kidnapped, Becca needs Nick. She just wasn’t expecting to want him so much. As their investigation turns into all-out war with an organized crime ring, only Nick can protect her. And only Becca can heal the scars no one else sees. Desire is the easy part. Love is as hard as it gets. Good thing Nick is always up for a challenge…
Laura Kaye's Website

I love her Hard Ink's series. It's got everything you want in a good romance, hot men capable of handing everything put in front of them.

On a lighter side I also love...

A Time For Home
by
Alexis Morgan
A Snowberry Creek novel.

Welcome to the small rustic town of Snowberry Creek....

As Nick Jenkins travels from the war zones of Afghanistan to his comrade's hometown, the kinds of wounds he carries with him have little to do with the shrapnel damage to his arm. Burdened with the guilt of failing to save his friend Spence, Nick is nonetheless determined to find a home for the dog that had been Spence's constant companion.
Callie Redding, Spence's childhood best friend, was shocked to learn he left her his old Victorian home. She's even more surprised when one of his war buddies shows up with a dog at his side—and a heavy weight on his shoulders. As a tribute to their friend's life, Nick agrees to help Callie turn her inheritance into a welcoming bed-and-breakfast for the town of Snowberry Creek.
But as they work through their grief together, they also share something far more precious then dash;the belief that love is worth fighting for....

I think you'd enjoy this series. Unlike Laura Kaye's Hard Ink series this one is more about the romance, and doesn't have romantic suspense elements in it. They are just good stories about a group of men finding their way after years of serving in the military.

I will end this post with another of my favorite authors that have characters with military backgrounds... 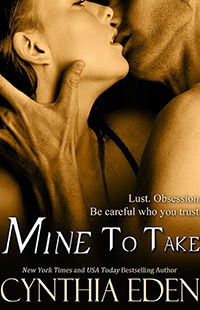 Mine To Take
by
Cynthia Eden

Sometimes you want someone so much…

Sometimes you need someone so much…
Lust can become love.
And love can turn into a deadly obsession.
***
Skye Sullivan knows that someone is watching her. Not just watching—stalking her. Months ago, Skye was involved in a dangerous car accident. The accident ended her dancing career and sent her fleeing back to Chicago. Skye is convinced that her stalker caused the crash, and she fears that he won’t stop pursuing her, not until she’s dead.
When someone breaks into her apartment in Chicago, Skye turns to the one man she believes can protect her—Trace Weston. Once, Trace was her lover. Two lost souls, they’d come together in a firestorm of need and desire. But then Trace had pushed her away. He’d joined the military, vanishing from her life. She’d put all of her emotion into dancing, and she’d tried to forget him.
Now Trace is one of the most successful men in the United States. Rich, driven, and carrying dark secrets, he agrees to help Skye. He’ll protect her from the danger that lurks in the darkness, but Trace wants more than to just be a guard for Skye.
He wants her. And he’ll take her. The years have changed him, hardened him. He’s not just a poor kid from the streets any longer. Now, he can have anything—or anyone—that he wants. And the one woman he has always wanted has just come back into his life. He won’t let her go again.
But with the threats mounting against Skye, she suspects that her stalker may be intimately close. He’s a man who knows her too well. As his attacks grow ever more dangerous, she realizes that if she trusts the wrong man, she could be making a fatal mistake.
Lust. Love. Obsession.
Just how far would you go in order to possess the one person you want the most?
Cynthia Eden's Website
Cynthia Eden's men are some of the toughest, hottest men I've ever read. They scare you and make you feel protected at the same time. If you haven't read this series yet you are missing out!

I hope you enjoyed my choices. I'd love to hear what you thought of our theme this week. Once again I want to thank everyone in the military and their families for all they do for us.
Make sure to stop by my fellow bloggers and see what they are talking about!
Born to Read Books: Cyndi
The Many Faces of Romances: Karen

Don't forget to come back next week when we are having a giveaway: A signed copy of Once a Seal by Anne Elizabeth (US Only)