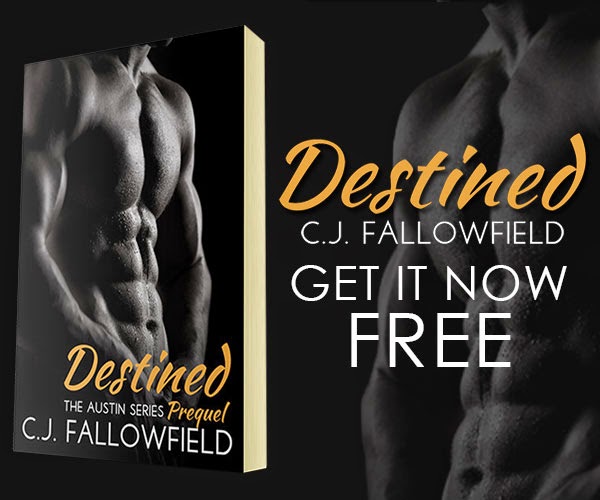 Gabe Austin is tormented by demons from his past. Blaming himself for his part in a tragic accident and abandoned by his father when he needed him most, he uses his charm, good looks and ripped physique to find temporary solace in an abundance of one night stands. Dominating, distant, unwilling to commit, sex becomes his outlet for his pain. Until he sees her. One glance was all it took to turn his world upside down, to make him want to possess her completely. Gabe just knew that she was the girl to heal his shattered heart, she was his destiny.

Destined is a short novella written from Gabe’s point of view. It details key moments in his life, leading to the events that unfold in ‘New Leaves, No Strings’, book one of The Austin Series, which combines erotica, romance and humour.

The Austin Series is six books in total, written from the perspective of Mia Page, and is designed to be read in the following sequence.

I stared at the brunette beauty in front of my eyes and gently clasped her face, her blue eyes met mine and it felt like she could see all the way into my soul. She saw the shame, anger and guilt buried deep inside me, yet she didn’t turn away. Instead she clutched my shoulders, drawing me closer, as her full lush lips parted and softly brushed over mine. I groaned into her mouth as we gently kissed, all the while my stomach was doing somersaults that I’d never experienced until I clapped eyes on her.
My whole body ached with desire. I’d fucked hundreds of women before her, blondes, red heads, tall, short, skinny, plump, the odd brunette, yet I hadn’t felt this level of magnetism with a single one, until now. We were opposite poles destined to be attracted to each other, the odds of finding her had to be one in a … billion, yet here she was in my arms, willing me to taste her, caress her, possess her.
I took her over with deep plunges of my tongue into her warm mouth, as I slid one hand to the nape of her neck, holding her to keep her from escaping. My other gently clutched her throat, my thumb caressing her jaw as she melted in my arms. Damn it, I was feeling things from kissing her that I hadn’t even felt from sex with other women. What was she doing to me? I heard her softly moan my name, which made me groan again, I felt it to my very core. I reluctantly pulled away and tore my t-shirt over my head. I felt a surge of pride when she gasped as her eyes roved hungrily over my solid pecs and bulging oblique’s. Her body looked exquisite too, she had curves in all the right places and the way those jeans clung to that rounded backside made me quiver in anticipation of being able to caress it. I needed her naked, right now.
She looked up at me through her long lashes as her lips parted and her chest heaved, while I slowly unbuttoned her blouse and pushed it off her shoulders. She was bare chested and my cock surged at the sight of her perfectly formed pert breasts, with peaked soft pink nipples. I wanted to touch them, lick them, kiss them and suck them, then rip off her jeans, lay her down on the bed and touch every inch of her flawless porcelain skin. I’d make her come over and over with my fingers and tongue. I’d part her swollen pink folds and lash her clit with my tongue, teasing, pressing softly then hard, circling with occasional plunges into her warmth so she wouldn’t know what was coming next. I’d sink my fingers into her tight pussy and seek out her g-spot, stroking it again and again, as I gently sucked on her clit. I’d make her so wet that she’d be primed to accept my solid thick cock without complaint. Once she was crying with pleasure and begging to me to take her, I’d sink into her and make love to her until she pleaded with me to fill her with my hot salty come.
Make love to her? Something didn’t sound right with that. I didn’t make love, I fucked. Roughly.
I groaned as I opened my eyes and realised I was in bed, alone, dreaming. That damn girl wouldn’t even leave me in peace when I was asleep. Since the second I’d spotted her I could think of nothing else, I wanted nothing else. Now it was time I did something about it. I was actually meeting her in less than four hours, and the only thing I knew for certain was that I’d stop at nothing until I made her mine. 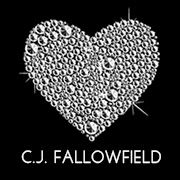 Author Info
I am a very young hearted 44 year old female from the United Kingdom. I enjoyed writing fictional stories as a child but, like many, long working hours in my career meant that I had little time for anything else. Finding myself in the fortunate position of now being able to work from home part time, I have been able to rekindle this long lost passion for storytelling. Writing aids include chocolate, Ben & Jerrys and copious amounts of coffee.