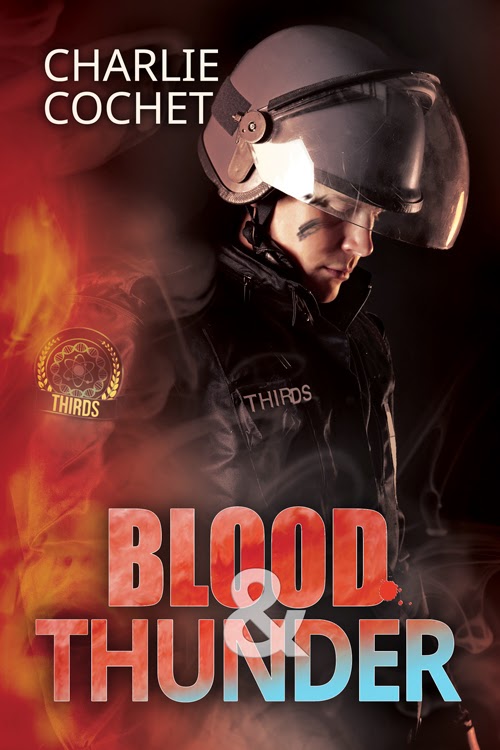 Blurb:
When a series of bombs go off in a Therian youth center, injuring members of THIRDS Team Destructive Delta, and causing a rift between agents Dexter J. Daley and Sloane Brodie, peace seems unattainable. Especially when a new and frightening group, the Order of Adrasteia, appears to always be a step ahead. With panic and intolerance spreading and streets becoming littered with the Order’s propaganda, hostility between Humans and Therians grows daily. Dex and Sloane, along with the rest of the team, are determined to take down the Order and restore peace, not to mention settle a personal score. But the deeper the team investigates the bombings, the more they believe there’s a more sinister motive than a desire to shed blood and spread chaos.

Discovering the frightful truth behind the Order’s intent forces Sloane to confront secrets from a past he thought he’d left behind for good, a past that could not only destroy him and his career, but also the reputation of the organization that made him all he is today. Now more than ever, Dex and Sloane need each other, and, along with trust, the strength of their bond will mean the difference between justice and all-out war.

“It is exceptionally important for you to know when your partner is playing and when he or she is irate. Agent Daley, please demonstrate.”
Dex arched an eyebrow at the instructor. “Which one?”
“Both.”
“You want me to piss him off?” What kind of class was this?
“In a matter of speaking. Yes.”
“Great.” Okay. How could he piss off his partner without losing a limb? What he needed to do was annoy Sloane, really annoy him. Shouldn’t be too difficult. Dex had annoying down to an art. He thrust a finger in Sloane’s face, knowing how much his Felid partner hated that. Then he started singing.  Nothing annoyed his partner like Hall and Oates.
Sloane let out a fierce roar, and Dex started dancing around him, his voice going high-pitched for certain lyrics while he snapped his fingers. Sloane pawed at him, and Dex spun on his heels, avoiding getting smacked. His partner hissed, baring his fangs before he took off after Dex.
“Shit!” Dex bolted, weaving through the rows of agents who were either laughing or watching him in disbelief while their instructor narrated as if this was nothing more than some nature video. Dex could see the title now. National Geographic presents Predatory Partners.
“Understand your partner’s behavior. Why is he or she behaving in such a fashion?”
“Because I pissed him off?” Dex called out over his shoulder, dashing back toward the instructor.
“Very good. Thank you, Agent Daley. You may now soothe your partner.”
Clearly, Dr. Eldridge didn’t personally know Sloane Brodie. Dex put his hands up, walking backward slowly as he spoke to his partner.
“Hey, buddy. Just following orders, you know? You heard him. I wasn’t the one who wanted to piss you off.” Dex crouched down and held a hand out. Please don’t bite me. Please don’t bite me. Sloane blinked before jumping up on his two back paws, his front paws pushing against Dex’s shoulders and knocking him onto his back. Sloane pinned him, and Dex braced himself. When Sloane started licking his face, Dex shut his eyes tight. “Okay, I get it. Payback. Take notes people.” Dex pointed at his partner. “This is what I meant about payback.”
“Agent Brodie, if you’ll resume your place beside your partner. Agent Daley, you may return to your mat.”
Sloane did as asked, and Dex wiped at his face with his sleeve before returning to his spot. He was never more grateful not to have ended up partnered with Ash than he was at this moment.
“Once you have assessed your partner and deduced he or she is irate, you will want to give your partner space. If you feel it’s safe to approach, you will do so with caution. Deal with what’s causing the issue. For example, Agent Fuller, please approach Agent Daley. Slowly.”
The moment Agent Fuller got to his feet, Sloane’s ears twitched. “Um, I don’t know if that’s a good idea,” Dex said, watching Agent Fuller creep toward Dex, as if Sloane hadn’t noticed. The Human rookie was clearly unaccustomed to dealing with Felids. “My partner’s a little on the grumpy side and poking the sleeping jaguar with a pointy stick might not end so well.”
Agent Fuller paused, his panicked gaze going to their instructor.
“It’s all right, Agent Fuller. Proceed.”
Doing as instructed, Agent Fuller resumed his prowl, while Sloane resumed his grooming of Dex, his heavy tail thumping against the floor. Uh-oh.
“As you can see by Agent Brodie’s movements, he’s fully aware of Agent Fuller. His tail is telling Agent Fuller to be cautious, Agent Daley is his, and he will not take kindly to any aggression toward his partner.”
Dex held up a finger. “Can I just—”
“Please stand, Agent Daley.”
Dex did as asked, and Sloane released a huff at having his grooming session interrupted. This was going to end badly. Dr. Eldridge had no idea what he was about to unleash. Sloane Brodie chewed rookies for breakfast and spit them out. Dex should know.
“Agent Fuller, please advance with the intention of striking Agent Daley.”
Dex didn’t bother taking a stance or prepare for a blow that would never land. His fellow rookies looked at him as if he was crazy, but soon they’d understand. Poor Agent Fuller. The guy pulled back a fist and the moment he took a step, Sloane’s roar echoed across the field. Ears flattened, fangs bare, Sloane leapt toward Agent Fuller who screamed like a preteen at a Bieber concert and made tracks across the field, Sloane on his heels looking mighty pissed.
“Thank you, Agent Brodie,” the instructor called out.
Agent Brodie wiped his ass with their instructor’s polite orders and chased Agent Fuller down the length of the grassy pitch. Dex glanced around. “So which of you is a medic?”
A few shaky hands went up.
“Great. Get ready for the next lesson. How to patch up a Human scratching post.”

Charlie Cochet is an author by day and artist by night. Always quick to succumb to the whispers of her wayward muse, no star is out of reach when following her passion. From Historical to Fantasy, Contemporary to Science Fiction, there’s bound to be plenty of mischief for her heroes to find themselves in, and plenty of romance, too!

Currently residing in South Florida, Charlie looks forward to migrating to a land where the weather includes seasons other than hot, hotter, and boy, it’s hot! When she isn't writing, she can usually be found reading, drawing, or watching movies. She runs on coffee, thrives on music, and loves to hear from readers.

You can find Charlie at