Review: Burn For Me by Cynthia Eden 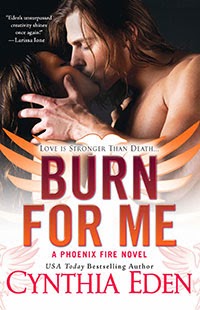 Burn For Me
by
Cynthia Eden

Eve Bradley was undercover looking for a story, not a cause. But something about the man they called Subject Thirteen got her involved. The scientists said he was a devil, and they had a decent case: Terrifying power. A bad attitude. And looks that could lead anyone to sin. . .
Cain O’Connor knows the minute he catches her candy scent that Eve could drive him wild. But she’s a threat–in a way no one has been for him in years. She’s safer away from him, too. But with a powerful conspiracy determined to shut Eve up for good, there’s no time to argue. All they can do is trust their instincts–and their hearts. . .
Excerpt
Barnes & Noble
Amazon 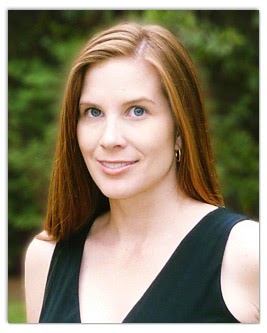 Award-winning author Cynthia Eden writes dark tales of paranormal romance and romantic suspense. She is aNew York Times, USA Today, Digital Book World, andIndieReader best-seller.  Cynthia is also a two-time finalist for the RITA® award (she was a finalist both in the romantic suspense category and in the paranormal romance category). Since she began writing full-time in 2005, Cynthia has written over thirty novels and novellas.
Cynthia is a “hybrid” author. She has published extensively with New York (her New York publishers include Kensington, Grand Central, and Harlequin), and she has also enjoyed success in her indie writing career.
Cynthia lives along the Alabama Gulf Coast. She loves romance novels, horror movies, and chocolate.  Her favorite hobbies including hiking in the mountains (searching for waterfalls) and spelunking.
You can find Cynthia chatting daily on Twitter or on herFacebook page.

Some Random Facts About Cynthia…

(For those who are curious or just bored!)

The Princess Bride, Romancing the Stone, Friday the 13th, Underworld Evolution, Pirates of the Caribbean, and Hellboy

Gemini…ah, she of the twin faces…

For more information about Cynthia and her writing, please visit her blog.

Burn For Me is book one of the Phoenix Fire Series. How cool is it to have a hero who's a Phoenix? Super cool! I love Cain. He's such a wonderful character. His abilities are out of this world. What he goes through will break your heart. You will also like Eve very much too. She ends up getting more then she bargained for when she decides to investigate what's going on with the paranormal beings that have volunteered to be the subject of a science study. So much happens that you  won't be able to put the book down. You will love this series! Happy reading!