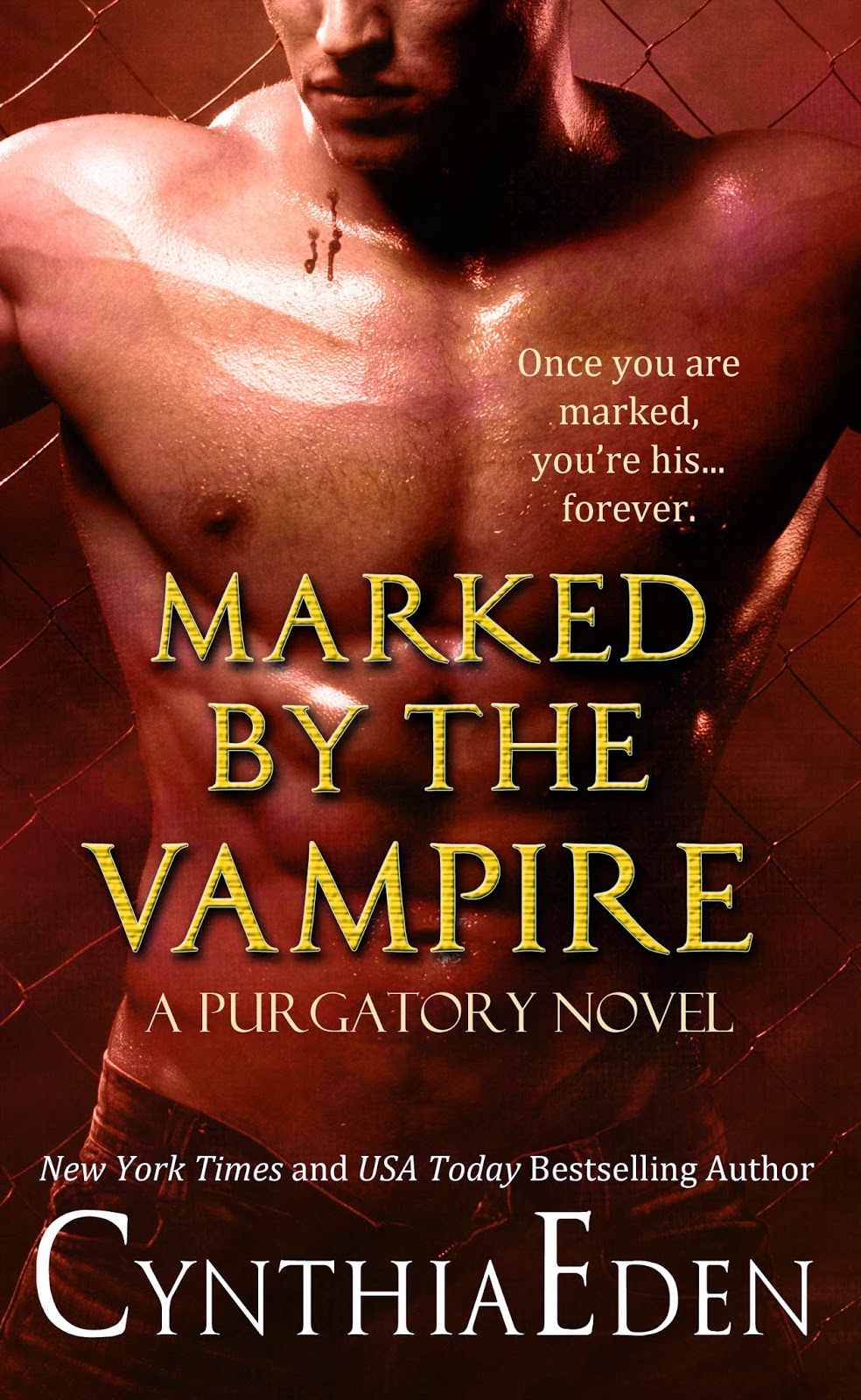 Marked By The Vampire
(Purgatory Series, Bk #2)
By Cynthia Eden

Vampires exist. So do werewolves. The creatures that you fear in the darkness? They’re all real. And the baddest of the paranormals…those who love to hurt humans…they’re sent to Purgatory, the only paranormal prison in the U.S.

His job is to stop the monsters.

Deadly forces are at work within Purgatory. The monsters are joining together—and their plans have to be stopped. FBI Agent Shane August, a very powerful vampire with a dark past, is sent into the prison on an undercover assignment. His job is to infiltrate the vampire clan, by any means necessary.

She wants to help the prisoners.

Dr. Olivia Maddox wants to find out just why certain paranormals go bad. What pushes some vampires over the edge? Why do some werewolves turn so savage? If she can understand the monsters, then Olivia thinks she can help them. When she gets permission to enter Purgatory, Olivia believes she is being given the research opportunity of a lifetime.

To survive, they have to rely on each other.

When the prisoners break loose, there is only one person—one vampire—who can protect her, but as Olivia and Shane fight the enemies that surround them, a dark and dangerous passion stirs to life between the doctor and the vamp. Shane realizes that Olivia is a woman carrying secrets—powerful, sinful secrets. Secrets that a man would kill to possess.

And Olivia realizes that—sometimes—you can’t control the beast inside of you. No matter how hard you try. Some passions can push you to the very limits of your control…and the growing lust that she feels for her vampire…it’s sending her racing right into a deadly storm of desire.

“I've got a plan, love. Trust me.” He advanced into the darkness.
Her nails sank into his skin. “No. Look, dammit, I get that it’s too little, too late, but I wasn't exactly high on choices upstairs.”

He frowned down at her. She wasn’t looking at his face in that total darkness, but instead staring just over his shoulder.

“Give me something here—I mean, make me know that I’m with the good guy.”

Oh, but he couldn't do that. He’d never been exactly good, not even when he’d been working with the FBI.  If she only knew the things he’d done, she might just run back up to the wolves. “I work with Pate.”

“Give me more. Why are you at Purgatory? What’s going on?”

He pulled her closer.  Wanted to take her mouth again but didn’t. Control. “We don’t have time for a fucking long discourse here, love. So here are the simple facts. I’m working undercover—a cover that I blew for you.  And right now, I’m the only thing standing between you and death, so if you want to die, then by all means…” He let her go. “Don’t trust me.”

In the darkness, he saw her wrap her arms around her stomach. “You…you haven’t killed? Your file was all lies?”

She rocked back on her heels. “Have you killed innocents?”

The woman was so naive. “There are no innocents in this world.”

Her body trembled. He could see the small ripple that shook her.

With his back teeth clenched, he demanded, “Now are you coming with me or do you want to try your luck with the wolves?”

Her hand lifted, tried to find him in the dark. He stepped toward her so that she touched his chest.