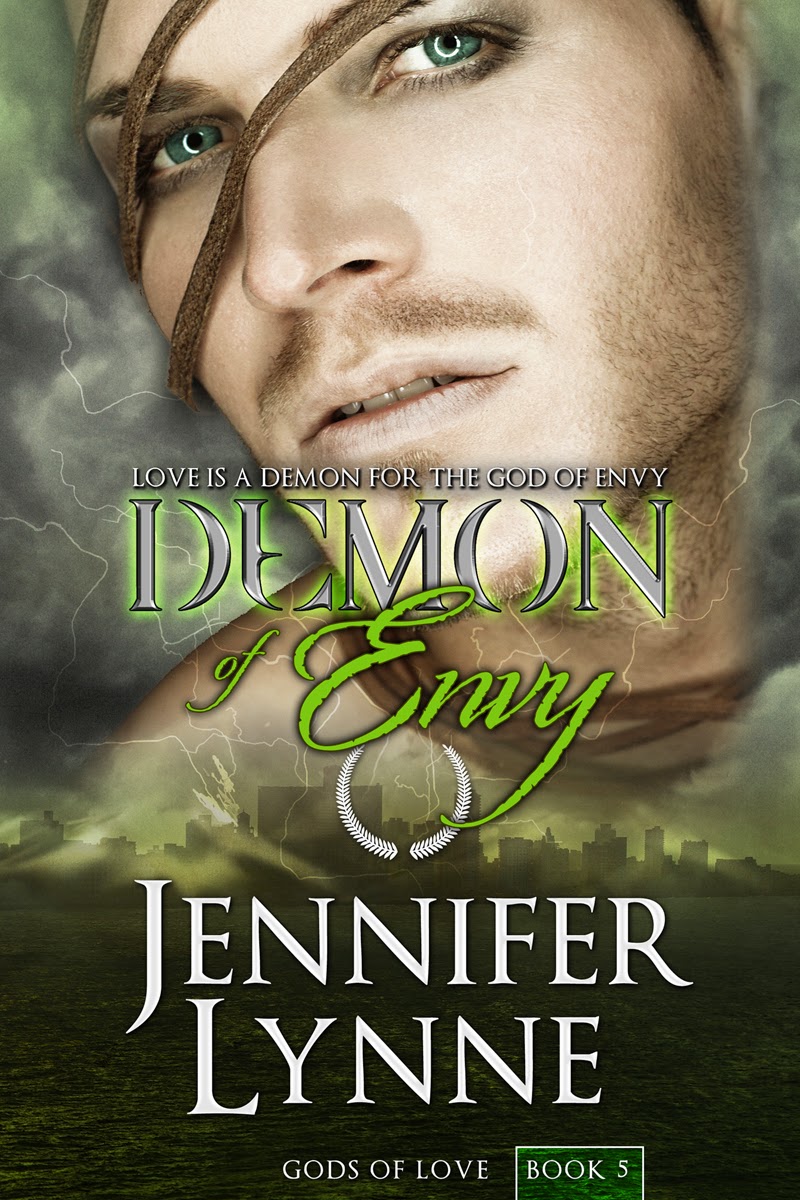 DEMON OF ENVY (GODS OF LOVE)
by Jennifer Lynne

Blurb:
Phthonos, god of envy and jealousy, has been given a second chance at life and love in the mortal realm. He is desperate to make up for the mistakes of his past. But is Thon more demon than god? And if the demon Envy wins out, how will this lonely god ever find room in his heart for love?

Olivia is an ordinary woman living an ordered life, but at thirty-two true romance appears to have eluded her. Everywhere she looks people are in relationships or falling in love, but her career and her charity work are enough to keep the demon of envy at bay.

Or so she thinks…until the moment he turns up on her doorstep with a demand that rips her life and her heart wide open and leaves her at risk of eternal torment.

Excerpt 3 (Sexy):
"I like you dirty, Thon. Let's have our shower later. Right now, I want you to fuck me." She turned in his arms and bent over the bed until her butt was in the air. She met his hungry gaze in the mirror across the room and knew the same appetite was probably there on her face. There was an urgency in her that she couldn't explain. She just knew that she had to have Thon inside her. Now.
He smacked her again, first on one cheek and then quickly on the other. She sucked in a breath at the sting. "Naughty," he said. "I won't fuck you. I will make love with you, Liv." His correction was punctuated with yet another quick slap, and when he dipped a thumb into her slit and ran it along the seam her pent-up breath released in a low whimper. He stopped at the sphincter of her ass and pushed in. "Do you like that?"
"I do." Her voice was muffled as she pressed her face into the mattress, trying to contain her desire, trying to stop her ass from quivering. Trying to delay the moment when she would explode into a million pieces around him.
"Ah. I can see that you do. Your pussy is glistening with sex fluids. You are all ready for me, and we've only just this instant begun to play." Pressure from his thumb as he played with her asshole created an answering ache in her core. Her labia lips felt so engorged that it was a miracle he could see anything at all down there. She moaned, her hips twitching as the tip of his thumb finally breached her.
"Thon, I know we've just started, but…I can't hold off for much longer." Desperation laced her words and he laughed above her, clearly delighting in her torment.
"Do you think I want you to hold off? Oh no, Liv, I want you writhing in ecstasy as I enter you. And I am going to enter you very soon. My cock is so wet with need that I could fuck your ass without lube, if that's what you wanted. But right now, I think I would rather…do this." He punctuated his words with a thrust and his hot cock slid straight into her waiting pussy.