Telepathic bounty hunter Kane has one rule—never get involved with a fugitive.
It’s a simple assignment with good money at the end. Picking Lena up is no problem. Protecting her when her ex-husband, mercenaries and another bounty hunter threaten her turns into the fight of their lives.
Together, the Stones of Adeline and Lena are powerful magic. She never considered the complication of the sexy bounty hunter and her undeniable desire for him. Their paranormal bond will need to be strong if they’re to survive together.

Accused of treason and the murder of her Psychic Special Forces team, Tessa is in the custody of the FBI. She’s shocked and terrified when the most powerful Psi Agent in the world shows up to probe her mind and discover her guilt or innocence.
Joshua never expected to find a victim of one of his probes attractive, but he can’t seem to leave her behind when all hell breaks loose. Saving the stunning blonde means being drawn into a psychic war that will definitely end his career—and likely both of their lives.
The rhythm of their psychic auras hums to perfection and neither can fight the bond, but it’s all ripped away by a madman with a grudge. Tessa falls into a coma, and Joshua will have to risk his heart and soul to pull her back from the brink.

Excerpt two
As she started to wake, his voice cut through her haziness. “Good, you’re awake. I don’t think I could take much more of your dreaming.”
She pushed herself out of the comfortable seat and moved forward to the cockpit. She ignored his comment and only felt her cheeks heat slightly. “Tell me about your psi abilities.”
“What do you want to know?”
She looked out the window and saw nothing but blackness below. They were likely over the ocean. “I can only read general impression of a person’s thoughts. Can you actually read minds?”
“Sometimes. It depends on how strong the thought is, how weak the mind, conscious or not, a lot of factors.”
She’d sat down in the copilot’s chair and turned toward him. She dreaded knowing the answer, but she had to ask. “Then let me be more specific, Mr. Lakeland. Can you read my mind?”
“Not without making an effort though I think the probe left a thread linking us. I sense more from you than most people I’ve just met. I get your general mood, feelings and the erotic nature of your dreams. Normally I would need to establish a link or focus my energy on a subject. With you it feels natural to be connected. I don’t have an explanation for it.”
Her gut tightened, but it was more excitement than dread over their strange connection. “What else can you do? You manipulated the locks back at the beach house, so you can move objects. Telekinesis can be handy. Can you see the future, the past, find objects?”
In the blue instrument lights she could see his mouth turn down. She could also feel his frustration growing. Was it because he didn’t like her asking him questions? Or was there something else?
“I’m not required to divulge that information to you, Ms. Clark. I strongly suggest you stop asking so many questions.”
“I probably won’t take your advice. I tend to be pretty inquisitive by nature.”
His mood lifted. She couldn’t help liking the feel of his mind, his emotions tickling the perimeter of hers. They were familiar and yet she’d never met him before. She closed off her mind. He had enough information about her and she knew nothing about him. Not really. She knew he had killed more than his share. 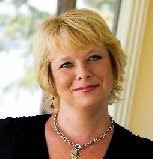 Author Info
A.S. Fenichel gave up a successful career in New York City to follow her husband to Texas and pursue her lifelong dream of being a professional writer. She’s never looked back.
A.S. adores writing stories filled with love, passion, desire, magic and maybe a little mayhem tossed in for good measure. Books have always been her perfect escape and she still relishes diving into one and staying up all night to finish a good story.
Multi-published in both erotic and historical romance, A.S. has 5 books currently available and three more under contract with Ellora’s Cave Publishing.
Originally from New York, she grew up in New Jersey, and now lives in the East Texas with her real life hero, her wonderful husband. When not reading or writing she enjoys cooking, travel, history, and puttering in her garden.