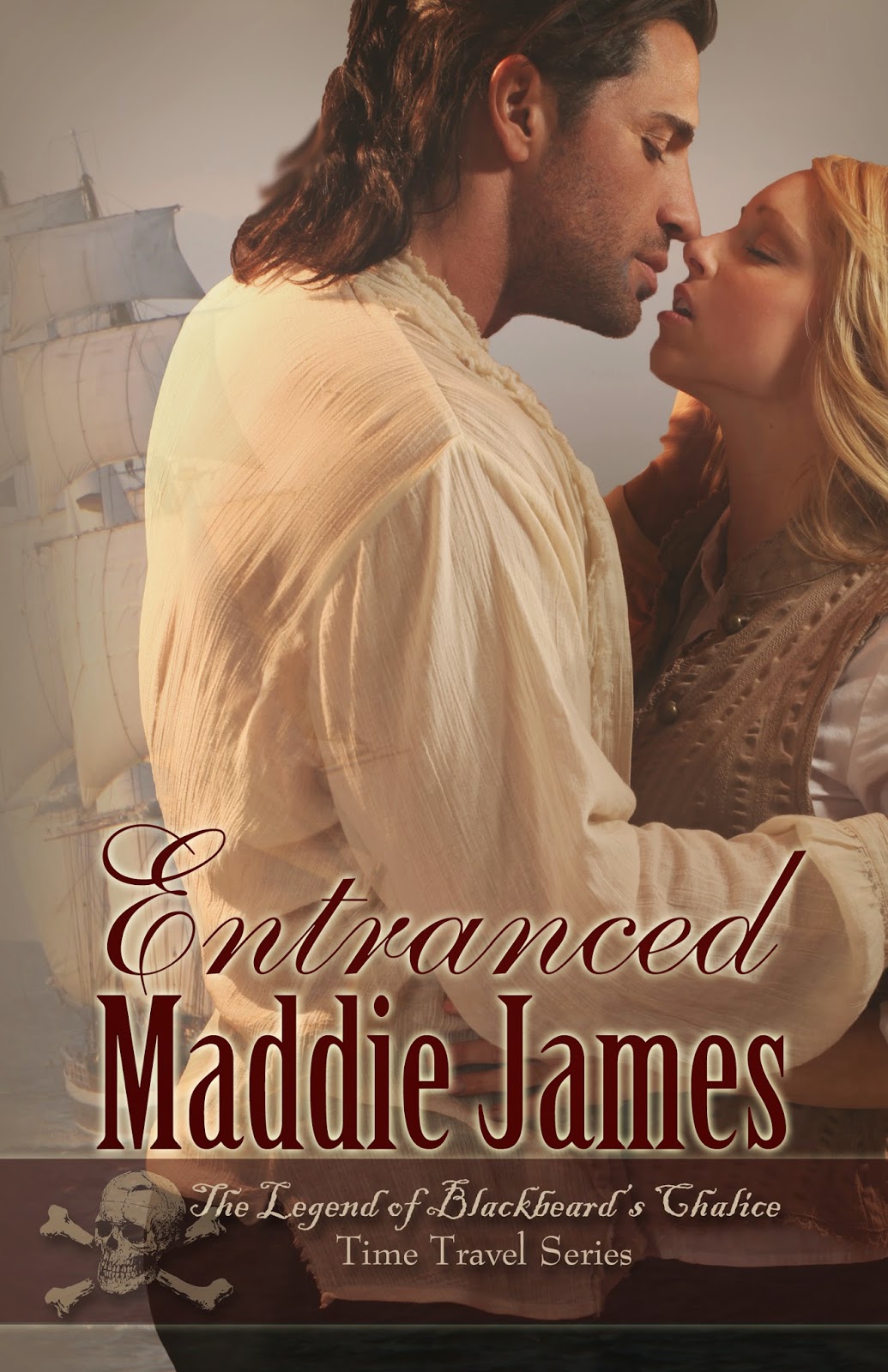 Can souls touch through time and hold on when all odds are against them?
Claire Winslow vacations on an East Coast barrier island, content with her life and her potential future—until the illusion of a man walking the misty shore haunts her. Then one kiss—a beautiful, soulful, stolen kiss in the night—and her life changes forever.

Nearly 300 years past, Jack Porter is in hot pursuit of his kidnapped wife. Not an easy feat considering the year is 1718 and the kidnapper is the notorious pirate Blackbeard aka Edward Teach. Determined to rescue his wife and take the pirate’s head in the process, Jack steals aboard the pirate’s ship to save her.

Entranced sends Jack and Claire on a wild search through time, not only for the resolution to a powerful attraction between them, but also for a historical artifact that holds the key to their future happiness—the coveted silver-plated chalice made from Blackbeard’s skull. 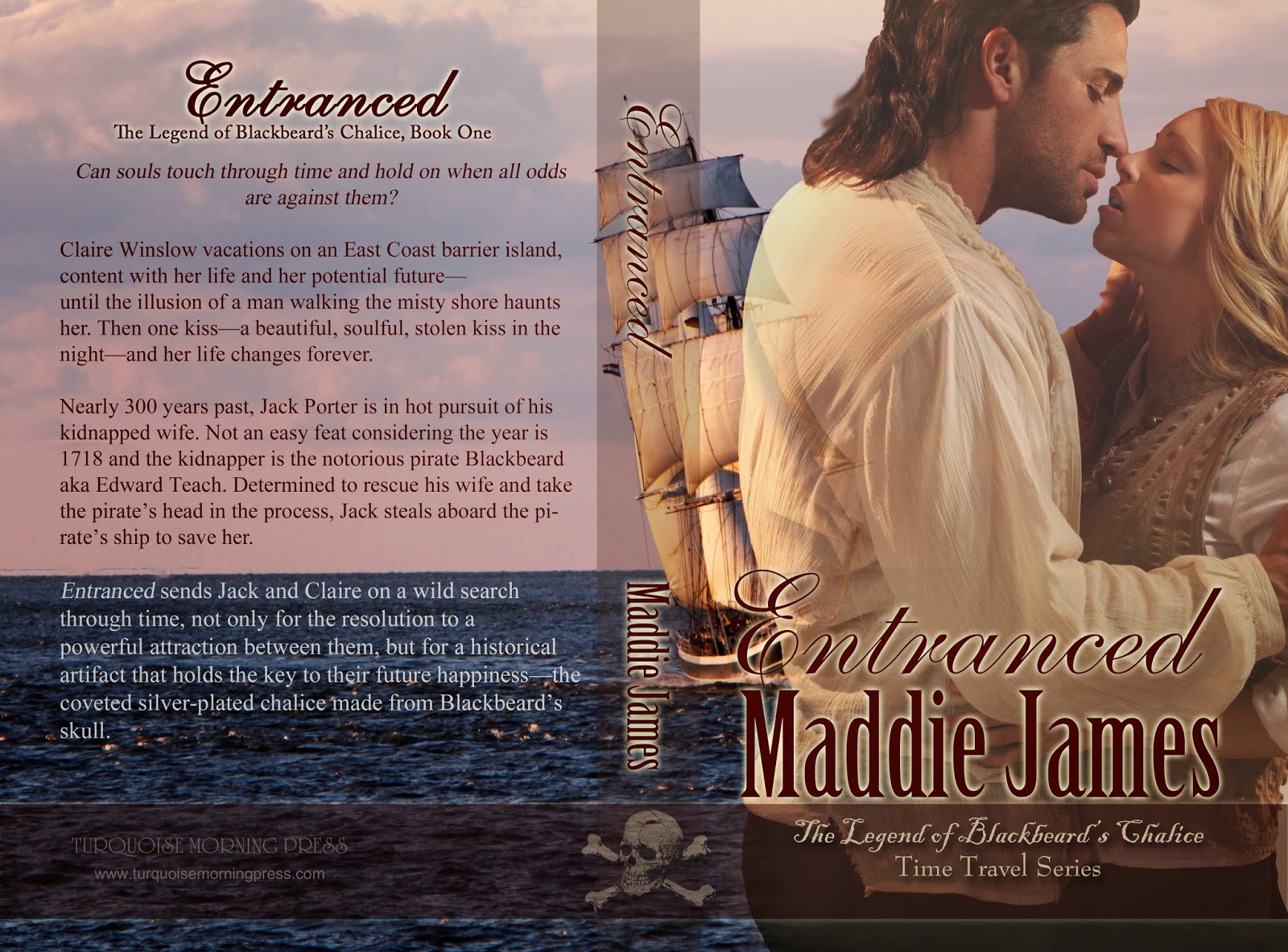 An Excerpt…
Claire stared at the man staring back at her through the night mist. She blinked and then focused her gaze once more.
He was still there.
Her pulse quickened. Her heart hammered in her chest. Slowly, she stepped around the wooden rocker and silently crossed the porch to the entrance. Just to the right of the steps she stopped, placed her hand around the carved porch post and leaned into it, her cheek resting against its smooth and cool painted exterior. Her gaze never left his, and his followed hers as she moved. Inhaling deeply, the misty air hung heavy in her throat. Claire held her breath for a moment and then slowly and silently let it out, trying to clear her mind of the haze.
The nearly full moon provided a shaft of light, perfectly illuminating the man. Waves beat steadily against the shore behind him, an ever-present drone in her ears.
Funny, she thought. The sound used to drive her crazy, now it was barely noticeable. The wind pushed cloud cover in front of the moon’s beam and again she searched the night for a glimpse of him.
There! He’s closer. Definitely closer.
She jumped and fought panic. Her heart skipped a beat. The first night he had stood at the foot of the lighthouse, barely a specter against the illuminated white. The next night he’d ventured nearer, away from the lighthouse.
Now he stood barely twenty yards away, slowly walking toward her on the boarded walkway leading to the steps of her porch. An image of a man. A hologram of sorts.
A ghost? Her imagination run amok?
He fascinated her. Too far away—always too far away to see his eyes—but she knew they were black as pitch, rimmed with clear bright whites.
He stood tall, with his fists placed on either hip. His broad stance was solid, roped with muscle. His hair was long, silky, and as black as his eyes.
Soft.
She could feel the texture on her fingertips.
How? She didn’t even know what, or who, this man was. But she knew these things about him. Somehow.
He stepped forward. The night breeze ruffled his loose, white shirt, opened halfway down his chest. The wind lifted and swirled her silk nightgown around her legs, and she wondered if the sight of it aroused him, as the glimpse of his bare chest aroused her. She hugged the porch post as he took a step closer.
And then another.
Her spine prickled with fear as well as curiosity and anticipation.
Oh, God. He’s coming closer.
Claire locked her gaze with his, stepping away from the post and backing across the porch until her rear bumped into the screen door. He stopped and stared. Mesmerized by his gaze, she felt a mystical pull, some sort of power emanating from him, propelling her closer. That push-pull rivaled the fear she felt in her heart.
He took another step forward. With each step his body became more solid. More real.
Claire shifted sideways and grasped the cold doorknob behind her.
Too close.
A soft ocean breeze blew a dark strand of hair across the man’s face, and suddenly she felt compelled to stroke it from his eyes. She wanted to reach forward, caress his temple, peer into those dark eyes…. She released the doorknob and took a half step forward.
He stood still.
She stepped forward once more— But before she could continue, clouds passed in front of the moon, leaving her in total darkness.
She stood, waiting, the connection broken. Her chest heaved in anticipation. Her pulse raced. Her breathing came in short, shallow gulps. She waited, but when the wind-whipped clouds passed out of the moon-glow’s path, she saw that he had vanished. Nothing but empty black night filled the open space between her cottage and the lighthouse.
Nothing.
Had he ever really been there?
Claire shook her head and blinked. Without fear, and with her heart beating a rapid tattoo, she rushed off the porch steps, turning in circles, her eyes straining through the night, searching.
“Come back here!” she yelled. “Who are you?”
But the night swallowed her plea. Only the ocean winds heard her call. 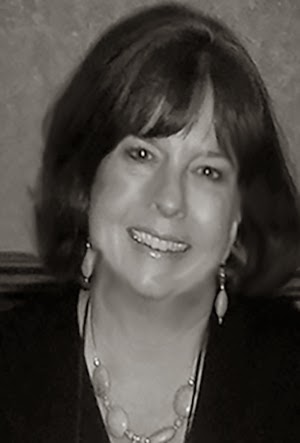 Whether writing traditional contemporary romance or building paranormal worlds, bestselling romance author, Maddie James, pens stories that frequently cross a variety of romantic sub-genres. Sweet or spicy, suspense or comedy, western or time-travel, her heroes and heroines always chase one thing—the happily-ever-after—whether they realize it or not!
A Food Network junkie who plots the way she cooks—by the seat of her pants—Maddie always has a delicious end product in mind (and she always follows a secret recipe!).
Her first book, THE WILD WEST, a Kensington Precious Gems romance, received a Calico Trails Cameo Award. RED: A SEDUCTION TALE, claimed first place as the Romance Book Scene's favorite novella of the year. A four time nominee for a CAPA/Psyche Award from The Romance Studio, Maddie’s books have received numerous 5 Star and Top Pick reviews. Her books have landed on Amazon, Barnes & Noble, and Kobo top-selling lists, and she is frequently listed as a Top 100 Most Popular Contemporary Romance Author at Amazon.