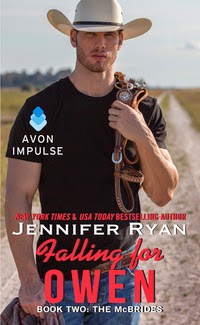 Falling for Owen
The McBrides Book Two
By: Jennifer Ryan
Releasing April 15th, 2014
Blurb
The McBrides of Fallbrook return with reformed bad boy Owen. He'll do whatever he must to protect the woman who's captured his heart. Attorney by day, rancher by night Owen McBride conquered his dark past and made it his mission to help the innocent—even at the expense of a personal life. But when a client's abusive ex-husband targets Owen and his gorgeous neighbor Claire gets caught in the crossfire, his feelings turn anything but professional. The mysterious beauty awakens something in him, and he'll move heaven and earth to keep her safe.
Coffee shop owner Claire Walsh learned the hard way that handsome men aren't to be trusted. Owen may be sexy as hell and determined to take care of her, but she's reluctant to put her heart on the line. His presence in her life puts a target on her back, yet the more time she spends with him, the more she finds she can't help falling for Owen.

JENNIFER RYAN, author of The Hunted Series, writes romantic suspense and contemporary small-town romances.
Jennifer lives in the San Francisco Bay Area with her husband and three children. When she isn’t writing a book, she’s reading one. Her obsession with both is often revealed in the state of her home, and how late dinner is to the table. When she finally leaves those fictional worlds, you’ll find her in the garden, playing in the dirt and daydreaming about people who live only in her head, until she puts them on paper.
Please visit her website at www.jennifer-ryan.com for information about upcoming releases.

Review
If you haven't yet read a book by Jennifer Ryan then you don't know what you're missing. She packs some much into each book. I will have to say that Owen is one of my favorite of her male characters. His ability to stand up and do what needs to be done just endears him to you. He stood in his brothers place when his brothers family needed him, he also stands for his clients. He's the type of person you want at your back during trying times. He's also hot, so that helps too. I also enjoyed Clair too. She was so hard working and sweet. She is the perfect person for Owen. Falling For Owen is book two in The McBrides Series and I would tell you that you might want to read the books in order to get a better picture of all the characters. Both books are well worth the price. Happy reading!