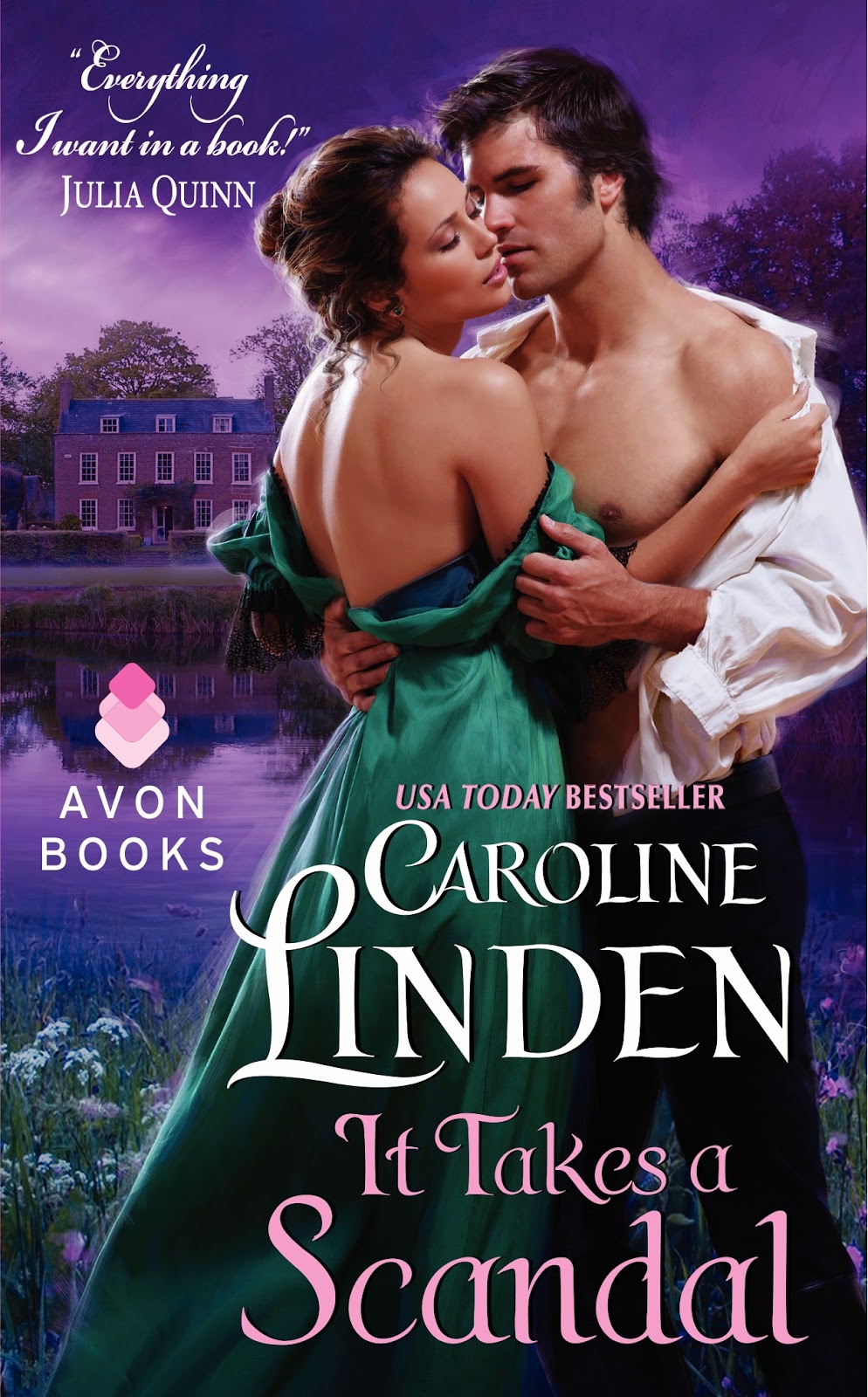 Blurb
The second book in a deliciously sexy new series from USA Today bestselling and RITA award winning author Caroline Linden, in which an utterly shocking book--Fifty Shades of Grey for the Regency era-- has all of London talking and gives more than one young miss a mind for scandal.
Sometimes it takes a scandal . . .
Abigail Weston has everything: beauty, wit, and one of the largest dowries in England. Her parents hope she’ll wed an earl. Abigail hopes for a man who wants her desperately and passionately. But the money seems to blind every man she meets-except one.
Sebastian Vane has nothing. He came home from war with a shattered leg to find his father mad and his inheritance gone. He’s not a fit suitor for anyone, let alone an heiress. But Abigail lights up his world like a comet, bright and beautiful and able to see him instead of his ruined reputation. And it might end happily ever after . . .
To reveal your heart’s desire
Until Benedict Lennox begins courting Abigail. Ben is everything Sebastian isn’t-wealthy, charming, heir to an earl. Sebastian won’t give up the only girl he’s ever loved without a fight, but Abigail must choose between the penniless gentleman who moves her heart, and the suitor who is everything her parents want.

Teaser #2:
“Don’t mind him,” said a voice. “He won’t hurt you.”
The sound of someone so near almost sent her leaping out of her skin. It took her a moment to locate the speaker. He wore a brown coat that blended with the trees, but took off his hat as he approached.
“He startled me,” she managed to say.
The stranger’s mouth quirked. “He does that sometimes. Sit,” he said to his dog, who obediently sat. “Is that your dog in the bracken?”
“Yes. I mean, it’s my mother’s dog,” she replied. “Milo. He’s only a puppy, but he ran off and I think he might have a rabbit in his mouth.”
He looked toward the whimpering sounds. “A terrier?”
“Yes, a small golden brown one.”
He nodded. “I’ll fetch him out.” He glanced at her dress. “You don’t seem well-dressed for walking in the woods.”
She blushed, and realized she was still holding her gown in a death grip, pulling the fabric tightly around her hips and exposing her legs almost to the knee. “I didn’t plan to walk in the woods. The cursed dog ran away, and I was chasing him.” She released her skirts, fluffing them a bit.
His gaze flicked downward for a moment, following the descent of her skirt. “It looks like a very elegant party you’re attending. I don’t want to keep you from it.” He hung his hat on a branch just over his head and headed into the thicket of bracken and fallen trees, whistling between his teeth as he went. Only when he had to step over a tree branch did she notice he used a cane, pressed tight to his left side.
“Thank you, sir,” Abigail called after him self-consciously. 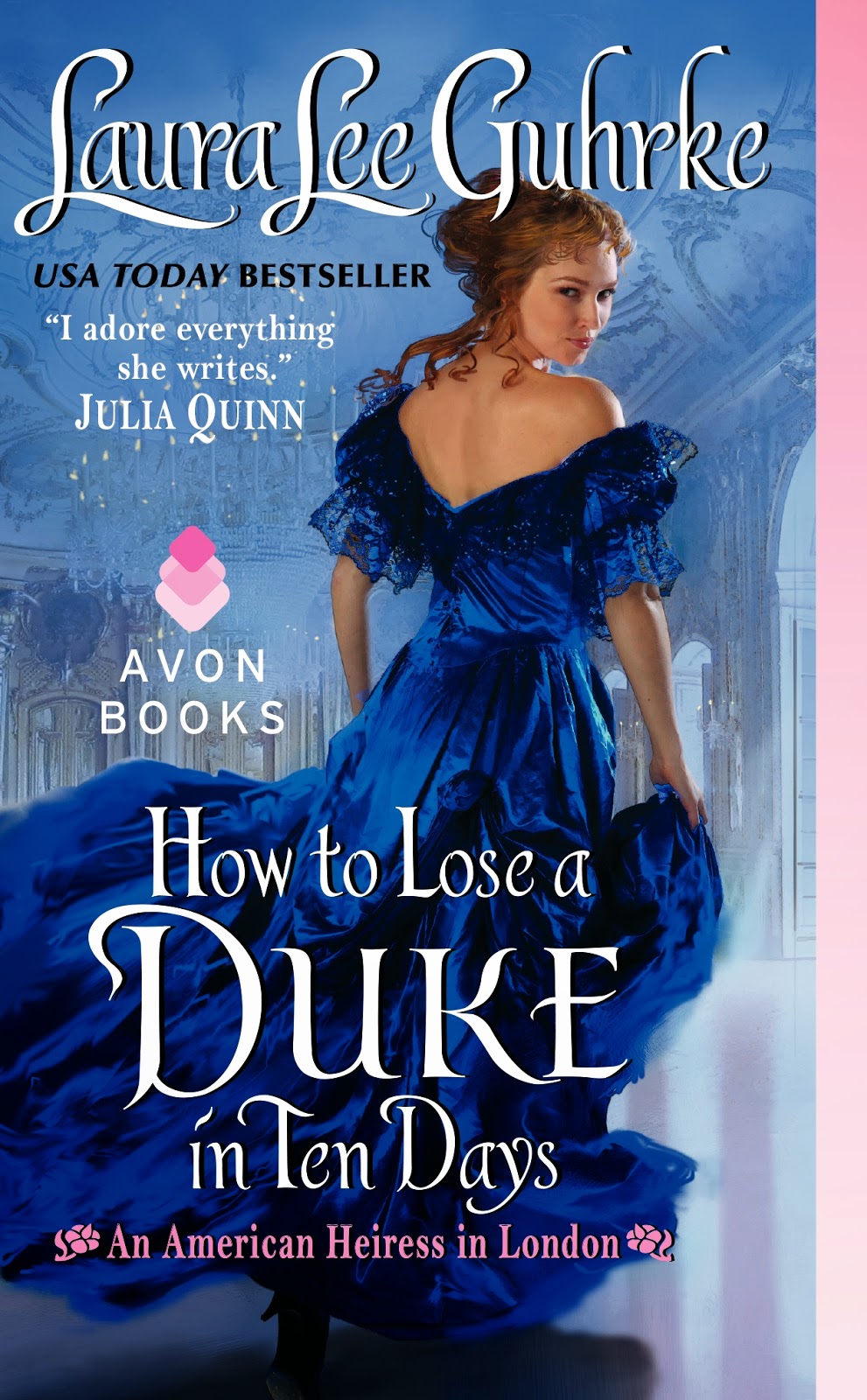 Blurb
From USA Today bestselling author Laura Lee Guhrke comes the story of a bargain, a marriage of convenience…and the chance for love to last a lifetime

They had a deal…

From the moment she met the devil-may-care Duke of Margrave, Edie knew he could change her life. And when he agreed to her outrageous proposal of a marriage of convenience, she was transformed from ruined American heiress to English duchess. Five years later, she’s delighted with their arrangement, especially since her husband is living on another continent.

But deals are made to be broken…

By marrying an heiress, Stuart was able to pay his family’s enormous debts, and Edie’s terms that he leave England forever seemed a small price to pay. But when a brush with death impels him home, he decides it’s time for a real marriage with his luscious American bride, and he proposes a bold new bargain: ten days to win her willing kiss. But is ten days enough to win her heart?

Excerpt #1:
Suddenly, the chanting stopped. Voices flowed over him in rapid bursts, anxious and fretful voices, speaking Kikuyu. He was fluent in most Bantu dialects, including that one, but despite the fact, he could not seem to comprehend what they were saying. The voices rose to a higher, almost frantic pitch, and suddenly, he felt his body being lifted from the cot. The movement sent a fresh wave of pain through his already-aching bones, and he cried out, a sound ripped from his ravaged throat, but they paid no heed to his protest. They were moving him now, carrying him somewhere. The pain was excruciating, particularly in his thigh, and he felt as if his bones would snap like sticks at any moment. He stirred, trying to show that he did not want to go where they were taking him, but the slight movement he managed to make was no deterrent. They carried him for what seemed an eternity, but at last, they stopped, and dry grass rustled beneath him as he was laid down. Then he heard the rasp of metal cutting through the turf and dirt. Voices murmured, hushed and indistinct. What the bloody hell was going on? He forced his eyes open again and found that directly above him was the outline of a silvery crescent moon, but its lines were blurry against the night sky. He blinked, shook his head, and blinked again. Suddenly, the moon came into focus. 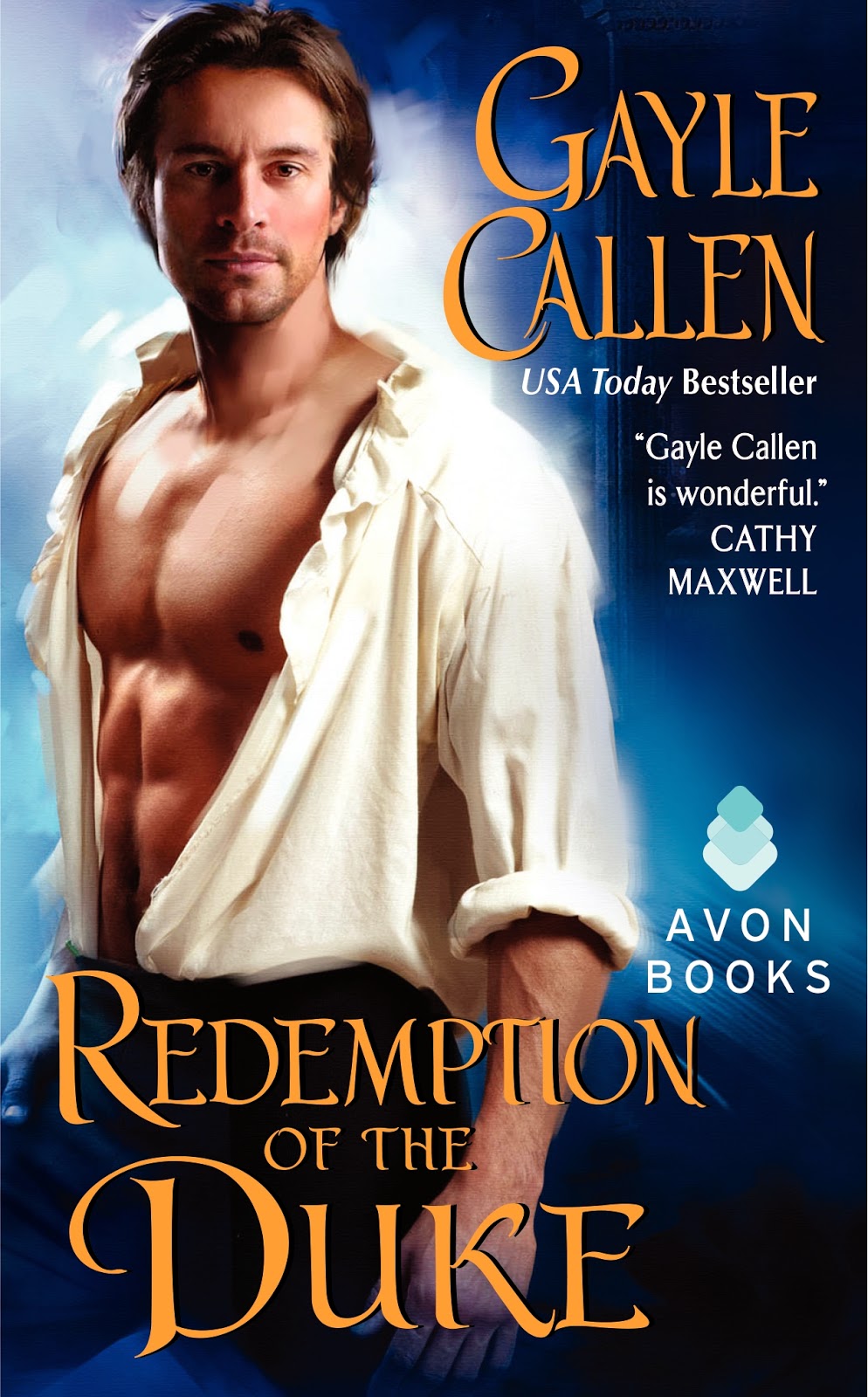 Blurb
USA Today bestselling author Gayle Callen concludes her new series with a tale of generosity, passion, and the true kindness of the heart.

A duke who needs to be tamed…a lady who refuses to be rescued.

Adam Chamberlin was the third son of a duke, known for gambling binges and drunken nights. No one expected anything of him …until tragedy strikes. Now Adam is the new Duke of Rothford, determined to right the wrongs he’s done. Except a secret in his past means helping the one woman who doesn’t want his help at all…

It’s not every day that a duke introduces himself to a woman sitting by herself in Hyde Park. Faith Cooper is even more surprised when Adam offers her a position as a lady’s companion to his elderly aunt. Faith refuses to be beholden to a man again-certainly not this man, who both infuriates and attracts her. But with the simmering passion between them, will Faith surrender to forbidden desire?

Excerpt #4
(Setup: The duke wishes to employ Faith Cooper to help her, since he feels guilty about the death of her brother, a fellow soldier. But she’s refused.)
He was coming for her—and Faith felt like an utter fool. What had possessed her to go out of her way to walk past Rothford Court?
But there was also a dangerous excitement making her breath come quickly, her heart pound, as she glanced over her shoulder and saw him threading his way through the light crowd, making people stop and gape at him. He wasn’t chasing her, she told herself. He was chasing the terrible mistakes of his past. She was a means to an end.
If she rationally understood this, why did she feel this way?
Because he was a man, and he was showing interest. She was disappointed in herself. The duke’s focus on her was bringing back excitement, the dark world of desire.
She was carrying a set of handkerchiefs wrapped in paper and string, finished with her errand for Adelia. Where else could she go? The duke was gaining on her slowly, as if he was enjoying himself, drat him.
The only safe place was the Warburton town house. When she reached the front door, she turned to give him a triumphant smile. It faded away when she saw him opening the gate. With a gasp, she fled inside, then managed to walk sedately past the butler and up the stairs toward Adelia’s room, even as she heard a knock at the front door.
She swallowed hard, but could not believe he’d ask for her. That would cause too much talk, even for a duke.

Caroline Linden was born a reader, not a writer. She earned a math degree from Harvard University and wrote computer software before turning to writing fiction. Ten years, twelve books, two Red Sox championships, and one dog later, she has never been happier with her decision. Her books have won the NEC Reader’s Choice Beanpot Award, the Daphne du Maurier Award, and RWA’s RITA Award. Since she never won any prizes in math, she takes this as a sign that her decision was also a smart one. Visit her online at www.carolinelinden.com

Laura Lee Guhrke spent seven years in advertising, had a successful catering business, and managed a construction company before she decided writing novels was more fun. A New York Times and USA Today bestselling author, Laura has penned over twenty historical romances. Her books have received many award nominations, and she is the recipient of romance fiction’s highest honor: the Romance Writers of America RITA Award. She lives in the Northwest with her husband (or, as she calls him, her very own romance hero), along with two diva cats and a Golden Retriever happy to be their slave. Laura loves hearing from readers, and you can contact her via her website: www.lauraleeguhrke.com.

After a detour through fitness instructing and computer programming, Gayle Callen found the life she’d always dreamed of as a romance writer. This USA Today bestselling author has written more than eighteen historical romances for Avon Books, and her novels have won the Holt Medallion and the Laurel Wreath Award.
Gayle lives in Central New York with her three children, her dog, Apollo, and her husband, Jim the Romance Hero.
Visit her website at www.gaylecallen.com. 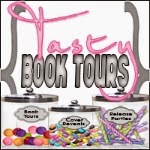 New this year we will be doing covers that match a theme we've picked for that month. Here's a link to see what we'll be doing this year.
For January we picked #winter...
I love her books and miss them. I hope she writes again soon. Have any of you read her before?