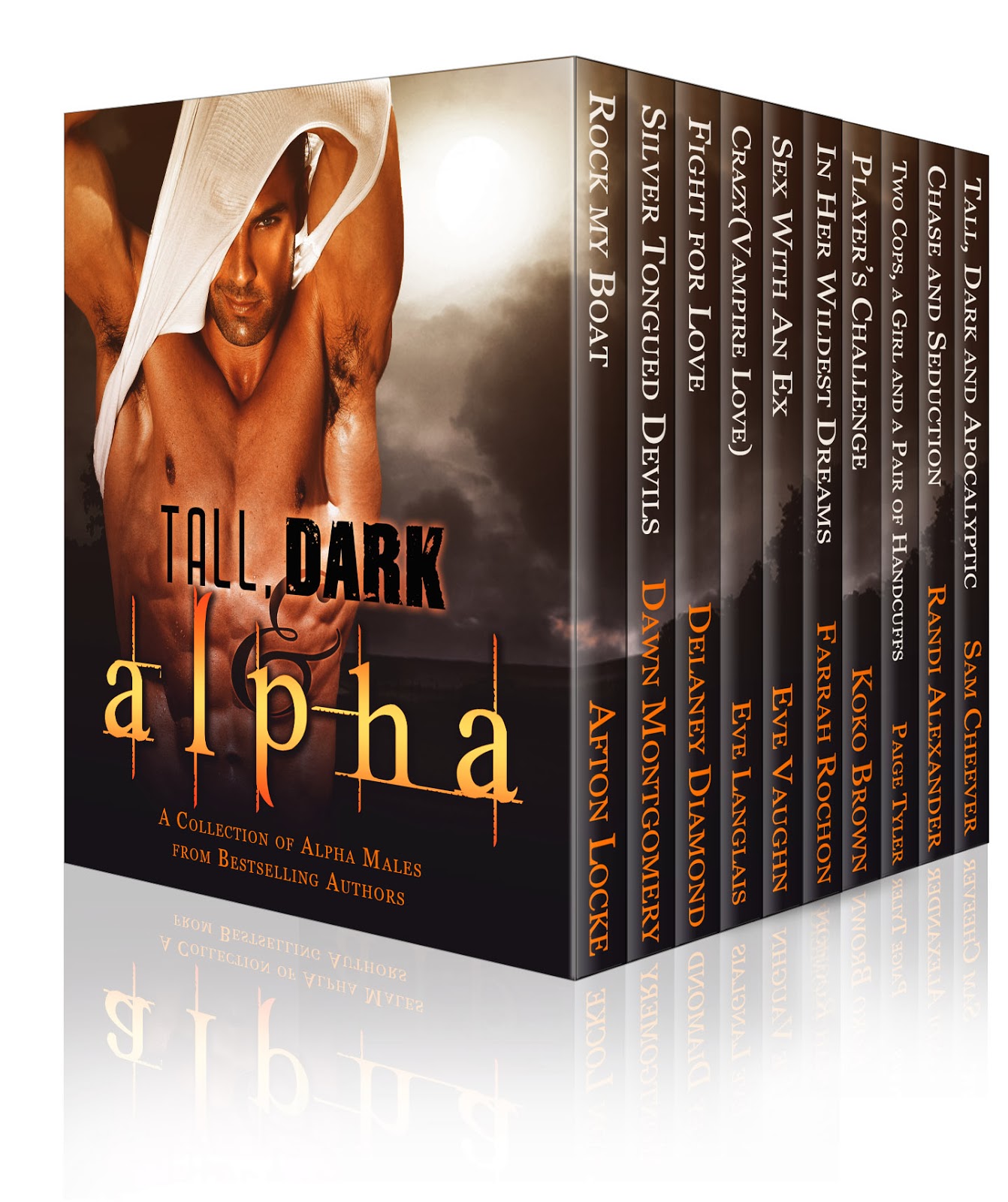 Tall, Dark & Alpha
Box Set
By: Various Authors
Releasing March 8th, 2014
Blurb
He makes your heart pound and melts your resistance away. He promises you a world of passion and you find it impossible to resist his dark charm. When he catches your eye across the room, you know he means business. He could be an executive, cop, shape shifter, or a bad boy looking for a little fun. Once he has you in his sights, you can’t get away—and after one sizzling night in his arms, you won’t want to. He’s Tall, Dark & Alpha. The alpha male is the ultimate indulgence…the richest dark chocolate…and we’re offering him to you in abundance.
Delve into the sensual worlds of award-winning authors: Randi Alexander, Koko Brown, Sam Cheever, Delaney Diamond, Eve Langlais, Afton Locke, Dawn Montgomery, Farrah Rochon, Paige Tyler, and Eve Vaughn. Immerse yourself in the alpha male experience.

Sam Cheever
Sam Cheever’s published work includes 40+ books of romantic suspense and fantasy/paranormal. Her books have won the Dream Realm Award for fantasy, have been nominated and/or won several CAPAs, were nominated for "Best of" with LRC and The Romance Reviews, and have won eCataromance's Reviewer's Choice award. When not writing, she lives on a hobby farm in Indiana with 11 dogs, 2 horses, and one husband.
Website
Facebook
Twitter

Delaney Diamond
Delaney Diamond was born and raised in the U.S. Virgin Islands and currently lives in Atlanta, Georgia. She writes sweet and sensual romance novels with African-American and interracial characters. As a diehard foodie, when her head's not buried in a book, she's in the kitchen trying out new recipes or dining at her favorite restaurants with friends.
Website
Facebook
Twitter

Eve Langlais
Eve Langlais is a Canadian mom who works full time as an author. In between juggling her three kids, hubby, and housework, she pens steamy romance--usually with werewolves, cyborgs or aliens. She loves to write, and while she doesn't always know what her mind is going to come up with next, she can promise it will be fun, probably humorous and most of all romantic, because she loves a HEA.
Website
Twitter
Facebook

Afton Locke
By day, Afton Locke is a logical programmer, but by night she swims in the mystical world of dreams. Intrigued by all things unexplained, like ghosts and karma, she delights in spinning dark, sensual stories that pull readers below the surface of everyday (and sometimes boring) life to the depths of forbidden fantasy.
Website
Facebook
Twitter

Dawn Montgomery
Dawn loves to write almost as much as she loves to read. She has traveled the world twice over. While her days were filled with long hours and hard work, her nights were left for dark, lustful fantasies in and out of strange hotels and cities.
Alaska and Texas are the places she calls home. She recently moved from the frigid North to Texas with her family and neurotic dog. It was tragic to leave behind the moose and bear for wide open plains and sexy cowboys.
Website
Facebook
Twitter

Farrah Rochon
Farrah Rochon, award-winning author of the popular Holmes Brothers series, hails from a small town just west of New Orleans. She has garnered much acclaim for her New York Sabers football series for Harlequin's Kimani Romance imprint. Farrah was named Shades of Romance Magazine's Best New Author of 2007, and her debut novel, Deliver Me, claimed the prize for Best Multicultural Romance Debut. She has been nominated for the prestigious RITA Award from Romance Writers of America and an RT BOOKReviews Reviewer's Choice Award. She spends way too much money on chocolate and Broadway shows.
Website
Facebook
Twitter

Paige Tyler
Paige Tyler is a USA Today Bestselling Author of sexy, romantic fiction. She and her very own military hero (also known as her husband) live on the beautiful Florida coast with their adorable fur baby (also known as their dog). Paige graduated with a degree in education, but decided to pursue her passion and write books about hunky alpha males and the kickbutt heroines who fall in love with them.
Website
Facebook
Twitter

Eve Vaughn
Eve Vaughn has enjoyed creating characters and stories from an early age. As a child she was always getting into mischief, so when she lost her television privileges (which was often), writing as her outlet. Her stories have gotten quite a bit spicier since then! When she's not writing or spending time her family, Eve is reading, baking, traveling or kicking butt in 80's trivia.
Website
Facebook
Twitter
Giveaway a Rafflecopter giveaway

Review
I love a box sets like Tall, Dark Alpha.  The reason for that is it's like having a taste of a bunch of authors. In this box set you have 10 authors to try and fall in love with. The stories run for contemporary to paranormal. A little something for everyone. So often you worry about trying new authors and this is a wonderful way to do it. You know you'll find someone that you like to read. I enjoyed all the stories, more some then others. My two top favorites are Paige Tyler's Two Cops, a Girl and a Pair of Handcuffs &  Dawn Montgomery's Silver Tongued Devils. I think you'll find some of the stories a little more spicy then the others. Like I said, something for everyone. I think you'll really enjoy this group of authors. Look for Tall, Dark and Alpha on March 8th! Happy reading!