Review & Giveaway: The Return of Brody McBride by Jennifer Ryan 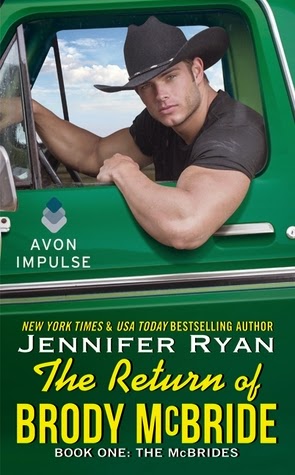 The Return of Brody McBride
The McBrides Book One
By: Jennifer Ryan
Releasing March 4th, 2014
Blurb
The black sheep of Fallbrook is back … and he's in for the surprise of his life.
Former bad boy, now-decorated Army Ranger Brody McBride is home and on a mission: Find the woman he never should have left behind and right the wrong he did eight years ago.
When the man she loved broke her heart and skipped town, Rain Evans picked up the pieces. But along with heartbreak, Brody left her something infinitely better than she could have imagined: two beautiful daughters. One she gave birth to, and the other she rescued from the woman who helped destroy her relationship with Brody.
Brody is shocked to discover he's a father, and he's more determined than ever to win back Rain and protect his girls. Can they rekindle the love they once shared and become the family they were always meant to be? Or will a danger from their past return and ruin everything?

THE RETURN OF BRODY MCBRIDE

Name: Rain Evans
Description: 5'5" dark hair, brown eyes.
Occupation: Single Mother, Mechanic
Marital Status: Waiting on Brody's proposal.
Children: Dawn and Autumn, her two beautiful girls.
Back Story: Rain only ever loved one man, her best friend growing up, Brody McBride. He may have been a bad boy back in the day, but she always saw something better in him. Too bad, he just had to go and prove her wrong. Now, he's back in town, declaring he wants her back, but she's been raising their two daughters alone: one she gave birth to, the other she bought from the woman who helped destroy her relationship with Brody. She's not about to forgive and forget so easily, but she's never been able to resist Brody. This time, it's not just her heart on the line, she has her girls to think about, but she wants what they want - to be a real family.

Name: Claire Walsh
Description: 5' 7", blond hair, green eyes.
Occupation: Cafe & Bookstore owner
Marital Status: Burned by her ex-husband, she's not looking for love, but Owen is doing his best to change her mind.
Children: Wants a family with the right man.
Back Story: Claire worked really hard to put her past and her ex-husband behind her. She's started a new life in Fallbrook, opening her own shop and living her life her way. When something wakes her in the middle of the night, she suspects a stray cat or raccoon, but not the drunk man ranting about her ex sleeping with his wife. A familiar story, but this time, he's got the wrong man. A case of mistaken identity puts a target on her back and brings Owen into her life. A man she never expected, but she can't help falling for Owen.

Name: Jessie Thompson
Description: 5' 7", dark hair, green/hazel eyes.
Occupation: Construction
Marital Status: Single
Children: Hope - She died of pneumonia five days after she was born.
Back Story: Jessie's alcoholic father blamed her for her mother's mistakes, and one night, he made good on all his threats and tried to kill her. Hurt and bleeding, she left town and never looked back, shaking her head at the rumors about her murder that spread after she disappeared. Never one to ask for help, for the sake of her daughter, she contacted Dylan's mother begging for her help to contact Dylan. She made the biggest mistake of her life and believed Dylan didn't want anything to do with her, or their child.
When her father dies, she comes back to Fallbrook to bury the old man and her past, only to find Dylan is the new sheriff and knows nothing about her, or their daughter. He truly believed she was dead all these years. Dylan unravels his mother's lies and makes it clear he wants her back. Can they find a way back together and a second chance at first love?

JENNIFER RYAN, author of The Hunted Series, writes romantic suspense and contemporary small-town romances.
Jennifer lives in the San Francisco Bay Area with her husband and three children. When she isn’t writing a book, she’s reading one. Her obsession with both is often revealed in the state of her home, and how late dinner is to the table. When she finally leaves those fictional worlds, you’ll find her in the garden, playing in the dirt and daydreaming about people who live only in her head, until she puts them on paper.
Please visit her website at www.jennifer-ryan.com for information about upcoming releases.

I can remember the first book I read of Jennifer Ryan's, in fact it's the one she is giving away. I loved that book and everything she's written since. When news came my way of her starting a new series I was like...NO! I loved the characters from the first one. Then I read her story in the "Confessions of a Secret Admirer" and thought, okay, I can do this. I'm so happy I did because if I hadn't I would never had read Rain and Brody's story. When Brody leaves he misses so much. It's such a shame that he wasn't there when his kids were born. I can't believe how much crap poor Rain had to put up with. You won't be able to help but fall in love with their family and want more and more. Not to worry, Owen story is next. Happy reading!