Book Club Thursday: Review: Through the Wall by Keri Ford 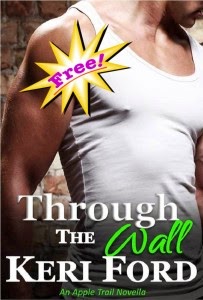 Through the Wall
by
Keri Ford


Book 1 of 6 of The Apple Trail Novella Series
She doesn’t want wild and raunchy, just a little spice…
He wants commitment and long-term, not a quick roll…
Two best friends who both want each other, but for very different reasons.
The walls are thin in the Apple Trail Apartments. Ever since she moved in after her divorce, Stephanie has listened to her best friend next door getting busy. By the bed knocking on the wall and the gasping women, Stephanie wants to be one of those women on the other side. She just has to get the courage up to ask.
The only woman Parker Madison ever wanted long-term was the very-married Stephanie. He’s tried finding a substitute, but there just isn’t another woman like her. Now that she's available, he just has to keep his hands to himself for a respectable length of time after her divorce. He’s planning to make a move after eight months. Stephanie takes him by surprise after three. Does he fulfill her request and risk becoming that best friend rebound guy or wait it out to better his chances for happily ever after?

Here we are again, it's Book Club Thursday. I hope you take the time to post a comment and to remember to visit the other two blogs participating in Thursday Book Club. I also want to remind you that because this is a book club there will be spoilers.

This week we are reviewing "Through the Wall" by Keri Ford. It's free from Amazon and only 57 pages so it should be a quick read for anyone who wants to read it with us.

Due to the fact that it was so short you don't really get a great feel for the book. I will say that it's not badly written and the characters aren't bad either. I just wish there was more to it. It also seems to want to be more sexy/hot then it really is. I do like the scene with the hot pan. If you want to know what happens you'll need to read the story. I know, I'm bad. I can't say I liked the story, but I also can't say I didn't. Since it was so short I didn't get that feeling of wasting my time like I might have from a full size book. With the price, it's worth the read.

I give Through the Wall 2.5 stars. If you've read it or just want to talk about it please leave a comment. Don't forget to stop by next week when we do our "Kidding Around" theme.

Make sure to stop by my fellow Book Club Thursday bloggers...