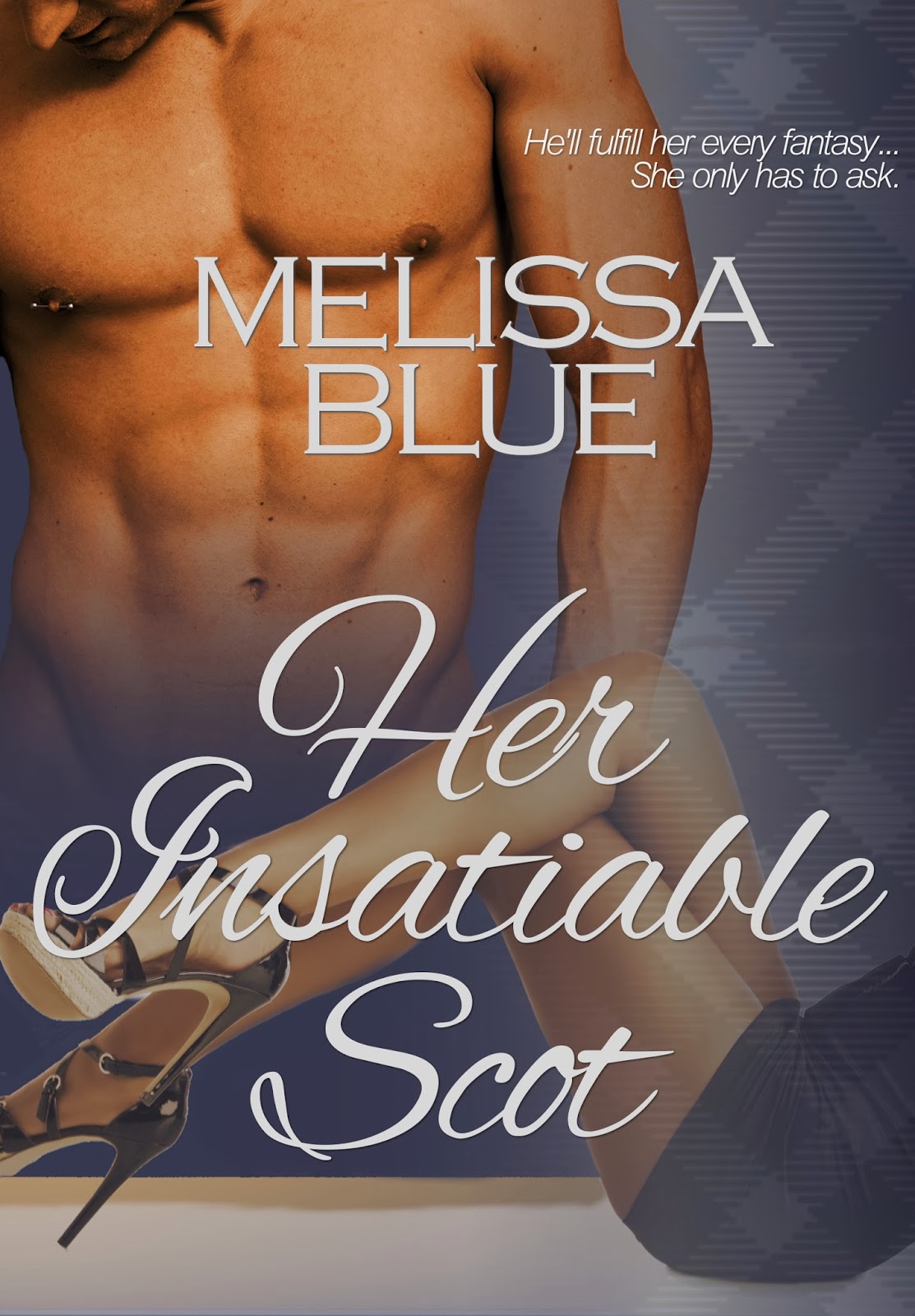 Her Insatiable Scot
Under the Kilt Book #2
By: Melissa Blue
Releasing February 20th, 2014

Blurb
Keri Pearson is currently between jobs, so there's nothing to lose when her cousin promises her a glowing recommendation from a top expert in their field in exchange for a small favor. All she has to do is lie about who she is and pretend to be married to a charming Scot for three hours. Her sexy-as-hell pretend husband makes it too easy to play the part of newlyweds. The last thing she should do is trust him or the genuineness of his lust or adoration, but his touch ignites an unexpected desire.
Tristan Baird turned his back on his past with plenty of regrets, but when his brother blackmails him, Tristan can’t say no. Given his brother saved his neck, an afternoon doing what he does best doesn’t seem like too much to ask. And it’s for a good cause. Doing the job right guarantees his brother and new wife will have the home of their dreams. But his stunning accomplice complicates the job. She is everything he always wanted and couldn’t have. The kind of woman who is too smart to ever trust a former conman.
The three-hour commitment stretches into five sexually charged days as they fight the explosive connection. As each day passes, Keri must remind herself what is true and what is false, but the lines are blurring. Tristan can only hope his past doesn't come back to ruin their future.

Goodreads Link to Under the Kilt Series


Excerpt
“Uh,” she started but lost the train of thought.
The warmth of his hand shifted from above her shoulder to her collarbone. His fingertips caressed her bared skin and trailed to her chin. His touch was soft, firm, and shot straight down to her stomach. She bit her lip to keep in a moan.
Heat and need filled her at the simple touch and it probably showed in her gaze. More than likely she poured out the kind of pheromones that let him know on some primitive level she wanted him to keep caressing her.
He nodded. “There you go. You're looking wary again instead of frightened. We can't be having the latter.”
“You're touching me.” She pointed out the obvious.
“I am.” He didn't look sorry for it. “And I don't plan to stop until you look less scared.”
Her spine straightened at the accusation. “I'm not scared.”
“No?” His brows rose, and he took another step forward. One leg invaded the space between her thighs.
She suddenly wanted to jerk her hips forward and hope the hard muscle of his leg would press against the ache his stare and touch ignited. Blood rushed from her heart and other limbs to assist the basic sexual need to have him lift his leg so she could straddle it and for once in her life let go.
He seemed like the kind of man who wouldn't bat an eye that they were standing in a hallway, right next to the class they'd have to enter. He'd steady his leg against the wall, grip her hips to guide her straight to an orgasm, and still he wouldn't be satisfied until her come dampened his slacks.
And because it seemed like he was that kind of man, she had to take control as always. Common sense had vacated the moment she stopped breathing air that wasn't scented with spice and man.
She pushed back her shoulders and they met the cold hard wall behind her. “Crowds unnerve a lot of people. Factor in the noise, the number of people in one small enclosed space, and my reticence to dive headlong into it makes sense. I wasn't prepared for this. I'm thinking of all the ways we'll likely get caught. And once again you've broken our hands-only rule. Do you blame me?”
No emotion graced his face for a moment and then he threw his head back and laughed. “You'd be amazed by what a man can do with just his hands.”
She wanted to know, more than she wanted control. “I bet you could do a lot, but I think we've established that we're a hot and heavy newlywed couple.”
He dipped his head, crushed his mouth to her neck. The move was so unexpected she did moan. He didn't lick her, just let his mouth trail up to her ear. “Anyone looking at your flushed face and my reaction to it will assume what we're going to do once this class is over.”

Melissa Blue's writing career started on a typewriter one month after her son was born. This would have been an idyllic situation for a writer if it had been 1985, not 2004. Eventually she upgraded to a computer. She's still typing away on the same computer, making imaginary people fall in love.

Where you can find me: