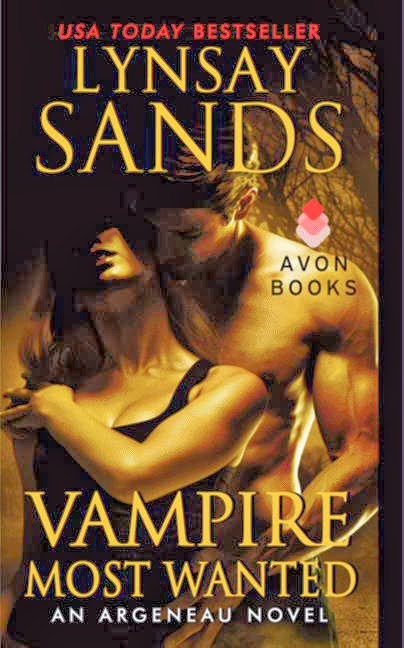 Vampire Most Wanted
by
Lynsay Sands

For Basha Argeneau, anything is better than facing her estranged family. Even hiding out in sweltering southern California. But when a sexy immortal in black shows up determined to bring her back to the clan, she'll do anything to keep far, far away from the past she can't outrun.
Marcus Notte isn't here to play games—especially not with someone as crazy as the infamous blonde. Asked by Lucian Argeneau to bring her back for questioning, Marcus is determined to carry out Lucian's request—no matter how the seductive little mind-reading vamp feels about it.
Basha doesn't mind fighting fire with fire, especially with a hot immortal involved. But if he wants to take her away, he'll have to catch her first . . .

Being a huge fan of anything Sands writes, may it be paranormal's or historical's.  I was very excited to read a new Argeneau story. When I started it I never knew it would turn out to be one of my favorites in the series. But it has. I loved Vampire Most Wanted. It has the usual, great characters, and it well-written. But I think it's the story line is what pulled me in and wouldn't let me go. Basha is both modern yet, old fashion. Right away you figure out that she only knows some things about their world. And lets talk about Marcus. He's such a good caring man who once he meets Basha does everything in his power to protect her. Even if she doesn't believe that. What that man goes through by her hands, and others  is so painful...You'll have to read the story to know what I'm talking about. You don't think I'm going to tell you everything do you? Vampire Most Wanted is book 20th of the Argeneau series. Happy reading!