Review: Four Weddings and a Fireman by Jennifer Bernard 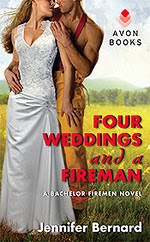 Four Weddings and a Fireman
by
Jennifer Bernard
Firefighter Derek "Vader" Brown is one of a kind—six feet of solid muscle with the heart of a born hero. It's that protective streak that has him pursuing a promotion to Captain to pay for his mother's home care. And it's why he intends to figure out why his sometime girlfriend Cherie Harper runs hot as hellfire one minute and pushes him away the next.
Cherie's got it bad. Vader sweeps her off her feet—literally—and their chemistry is combustible. There's just the little problem of a nightmare from her past she was desperate to escape. And then her sister Trixie arrives, causing havoc for Cherie and the male population of San Gabriel. Cherie doesn't want her past to complicate Vader's life or his career. But there's nothing like a firefighter for breaking through all your defenses, one smoldering kiss at a time...
To Read a Excerpt
Barnes & Noble
Amazon
Author's Website

Review
I loved this book and part of that is because of Vader. You fall for him in the past books and get the feeling as time goes on that there is more to him then you know. And you'd be right. You learn so much about him and how he feels about his mother. It turns out that he's more then just a muscular body. I can't say I'm disappointed with the real Vader. Of course, he does need a good, honest woman by his side. He doesn't have it in Cherie, or not at first.   At times you'll be pissed off at Cherie because of the way she treats him. Over and over she tells him no to marriage and you can't understand why. It does take a little while for you to understand all, but you will. I can tell you that Four Weddings and a Fireman is a wonderful addition to the Bachelor Firemen Series. If you haven't yet read this series what are you waiting for? Run! and pick them up. Happy reading!
ARC Avon Jennifer Bernard