Excerpt/Giveaway: Flashes of Me by Cynthia Sax 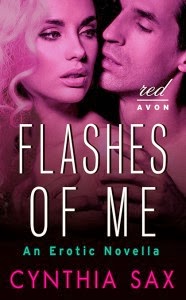 FLASHES OF ME
By Cynthia Sax

FLASHES OF ME is the incredibly hot and steamy new novella from Cynthia Sax, author of the Seen Trilogy. Sax delves deep into voyeurism, a whole new realm of erotica, and her latest read screams with seduction. With a red-hot tension between a brawny executive and a new, curvy intern, the secrets, sex and suspense will have readers aching for more. FLASHES OF ME is on sale 02/18/2014 from Avon Impulse wherever e-books are sold. Please contact me if you are interested in reviewing.

Henley, the head of cyber security at Blaine Technologies, is a man no sane person crosses. He watches employees constantly using his network of cameras and enforces his rules by any means possible. Henley strives to protect everything in sight but rumors of his violent past, his scarred hands and huge size have resulted in him being feared by everyone… almost everyone.

In walks Katalina, the perky intern with a bright taste for fashion. Kat has made a big move across the country to escape her past, and comes alive at the first touch of Henley. Though she fears the revelation of her most painful secret much more than she fears Henley’s wrath, she sees the loneliness in his dark eyes, feels the gentleness in his marred fingers, and tastes the need in his kisses. She knows he watches her, and her only. His silly rules about not stripping for the cameras and no sex at the office are destined to be broken…it’s only a matter of time.

But can this beauty…
tame her beastly boss?

CYNTHIA SAX lives in a world filled with magic and romance. Although her heroes may not always say “I love you,” they will do anything for the women they adore. They live passionately. They play hard. They love the same women forever.

Cynthia has loved the same wonderful man forever. Her supportive hubby offers himself up to the joys and pains of research, while they travel the world together, meeting fascinating people and finding inspiration in exotic places such as Istanbul, Bali, and Chicago.

Please visit her on the web at www.CynthiaSax.com.