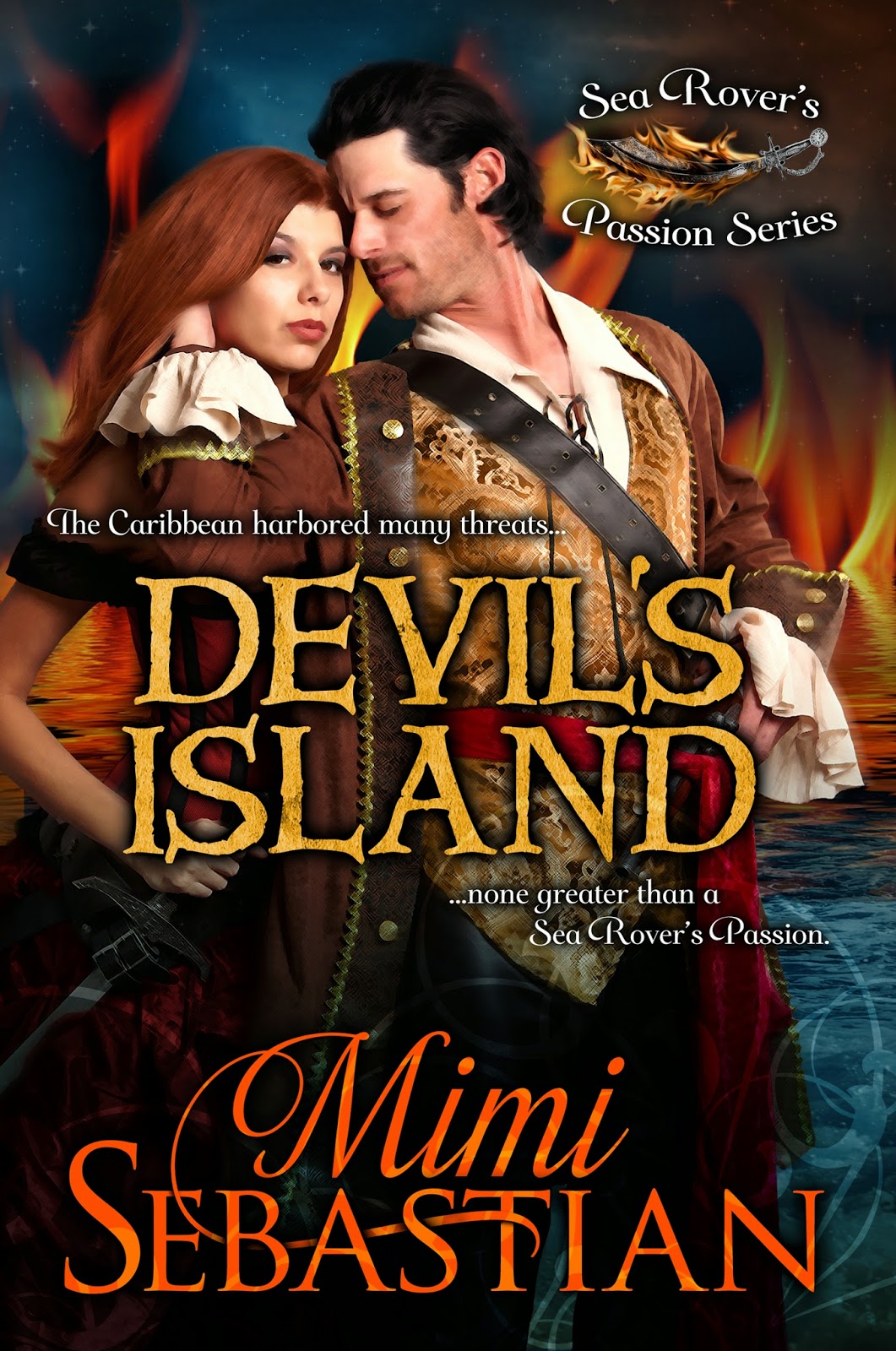 Captain Boone Wilder leads a cadre of powerful and notorious pirates that rule the West Indies. He's survived the cutthroat's life, bearing the scars to prove it. Fearless, he seeks only the freedom of the seas and an enemy he's hunted with a vengeance for years. When Boone waylays a fat merchant vessel bound for Port Royal, he discovers more than he bargained for in the luscious bounty of Miss Sabine Tanner. But Miss Tanner hides more than tempting curves in her skirts. When Boone finds her sneaking about the Port Royal taverns, meeting with dubious captains, he's determined to learn what devious game she’s playing.
The daughter of a condemned pirate captain, Sabine Tanner took to the seas to clear her father’s name and locate her father’s legendary treasure. When her ship bound for Port Royal is boarded, she's captured by the sun-bronzed, muscular Captain Wilder. While the man is dangerously attractive, she knows from experience that Wilder is nothing but a scabrous bilge rat. Circumstances force her to sail with the scoundrel to find her father's ship, lost on the phantom Devil's Island. Driven by opposing agendas, will they survive the hidden truths, or does their greatest threat lie with each other?

Excerpt
Wilder.
It couldn’t. It simply couldn’t.
She bent close to Barth, without tearing her gaze from Captain Wilder. “Don’t you dare say anything.”
His jaws worked his chew spasmodically, barely able to contain his desire to shout out their identities to the pirates.
He finally spit. “But…it’s Boone.”
“No,” she whispered through her clenched teeth. “You promised.”
“Aye, what’s going on? Hush now,” one of the pirate crew admonished, drawing the unwanted attention of Boone Wilder. Bloody hell. He turned and commanded one of his crew, Flory, to take her below.
Sabine followed the spindly lad down the ladder to a small cabin in the stern that shared the gallery—a balcony stretching across the stern—with the larger stateroom. Flory locked the door behind him and left her trapped inside.
Sabine sat on one of the velvet upholstered chairs and cursed. Boone was a fair pirate, that much she knew. He was fierce without succumbing to brutality. And he was dangerously competent, one of the youngest pirates she knew of to command a ship of force and crew of at least a hundred men, now more. And her father had urged her to seek his aid.
Yet why couldn’t she?
She shuddered at the smile he gave her before Flory ushered her below deck. She wrapped her arms around herself and paced. She walked to the cabinet and fingered the books and navigational charts probably stolen from captured vessels. She unrolled one of the charts and admired how the cartographer had noted even the smallest of detail in drawing the area’s islands, currents, and longitude lines.
Sabine flinched and dropped the chart when the door latch clicked and the heavy wood creaked open. She lifted her chin, knowing the unwanted visitor was Boone, yet despite her effort to appear calm and unaffected, her resolve wavered at the sight of him, standing a dangerous pace away. If before he seemed like a distant painting, now he stood before her, very real—breathing and virile—staring at her with an unfathomable expression in his gray eyes that imitated the cool beauty of granite. She picked up the chart and tucked it back in the cabinet, her prickling nerves well aware of him watching her.
“What will you do with us?” she asked after clearing her throat.
“What is your name?” he asked instead, his tone clearly indicating he’d be the one asking questions.
“Emily Thatcher.” The false name came easily to her lips.
“Miss Thatcher. Where were you headed?”
“Port Royal.”
He studied her for a moment before responding. “And what business does a woman of London have in Jamaica?”
“I’m going to meet my father. He owns a shipping company.”
He circled behind her, like a predator seeking the vulnerable, exposed parts of her body before closing in for the kill. She felt his breath on her neck, causing her skin to prickle. “What’s the name of the company?”
“Thatcher Enterprises.”
She felt his heat move away from her and resumed her breathing.
“Never heard of it.”
“I’d not expect a pirate to.”
He closed the distance between them, stopping too close for Sabine’s fluttering heart, and ran a finger over the small rise of her breasts, causing her breath to skip. “Yes, I’m a pirate. Best you remember that.”
He lifted his finger to twirl a stray lock of her hair and stared at her a few more seconds before striding back to the door. “I plan on dropping this vessel in Port Royal along with her crew.”
“And me?”
He kept his back to her and paused before answering. “I haven’t decided what to do with you, Miss Thatcher.” The way he said her fake name made her think he didn’t believe it was real for a second. Sabine heaved a breath after he closed the door. She ran her hand over her chest where he’d grazed her skin. Damn him. Boone Wilder was every bit the bastard she remembered.

Mimi Sebastian raised herself on books and the strange and unusual with an unhealthy dose of comics and swashbuckling Errol Flynn movies. Loving angst-filled romance thrown in, she decided to blend all those elements in a steamy mix in her first Urban Fantasy series, the Necromancer Books. The first book, The Necromancer’s Seduction, debuted July 15, 2013, with ImaJinn Books.
Mimi spent two years in the Ivory Coast with the Peace Corps and loves to introduce tidbits from her experiences in her writing. She’s a member of Romance Writers of America and the Fantasy, Futuristic and Paranormal chapter of RWA. A transplant from the beaches of Florida, Mimi now wanders the desert in Phoenix, AZ, and attempts to balance writing with a day career, fantastic family, and household diva: her Amazon parrot.