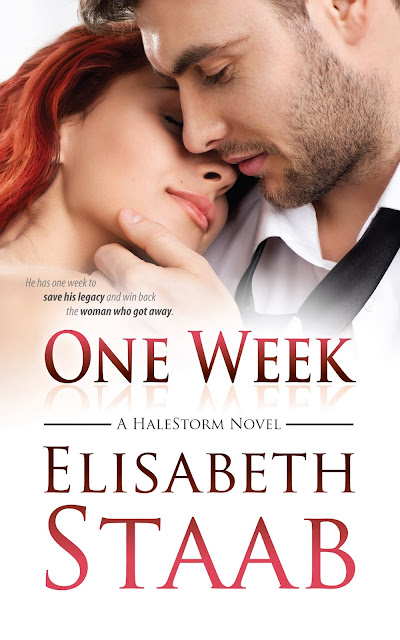 One Week
By Elisabeth Staab

HE HAS A LEGACY TO SAVE…

Michael Hale's company is in jeopardy. In the wake of his father's death and his transition to CEO, projects are circling the drain, and that could cost him everything. Come to find out, the consultant hired to fix things is the "one who got away" many years ago. This time he's playing for keeps, and he intends to win.

SHE SHOULD NEVER SAY NEVER…

Elise Jackson swore she wouldn't come near Michael Hale again. He sucker punched her professionally, and he broke her heart. Still, a job’s a job, and they can both be adults. But high emotion and late nights working lead to passion neither of them can deny.

They have one week. Can the two of them pull Michael's company out of the fire and heal their old wounds?

“You called me innocent back there in that parking lot. I dressed conservatively that summer because I was supposed to. You thought I was some kid who had just fallen off the turnip truck?” Elise stepped forward. From the rise and fall of his chest, his breath had deepened, and she struggled to keep her focus on his hard, dark eyes. Still a little beer buzzed, she put herself up in his face and laid it all on the line. “You tried to protect me because you’d heard rumors about Scarborough? What about the rumors I heard about you?”
His jaw hardened.
“What, you thought I wouldn’t have heard? Every woman at HaleStorm with a pulse and proper vision had your name written on their vibrators.”
This time she ignored the warning from her shoes when she clicked forward. “I didn’t let those rumors stop me, either. I’d been trying damn hard to get your attention that summer.”
He didn't move except to blink. “The trouble with rumors is they're half-true at best if true at all.” Then he did move, pressing into her space.
She hardened her gaze and met his stare, but there in the dim light of his apartment his eyes had turned the color of dark amber. And holy cow, those lashes could make any supermodel cry with envy. “Okay,” she said. “So what's your truth?”
His fingers danced up and down her spine, setting off shivers all over the place. He bent toward her, his stubble scraping her cheek. “The truth is, you were probably right when you said that this was a bad idea.”
She had said that, hadn’t she? His palm skimmed her waist and she damned herself for being sensible. “That… that probably is true.”
“And.” The heat of his hands and his breath licked along her neck and shoulders. Maybe she should have worn her coat over. “You have no idea what’s fact and what’s fiction about me.”
What Elise did know was the way he touched her now might well fry her brain. She needed to back away while she still had some semblance of her dignity. She managed one step. “Maybe I don't. My point is, neither do you.”
Other than a slight raise of his eyebrows, he didn't reply. Fine. Well, about that whole leaving with her dignity intact plan….
Another step. “Whatever. Thank you for trying to protect me. It was a misguided, unnecessary effort, but thank you for being concerned.” Finally, with a clench of fists and a huff of breath, she turned on her throbbing heel and stormed for the door.

Elisabeth Staab still lives with her nose in a book and at least one foot in an imaginary world. She believes that all kinds of safe and sane love should be celebrated but she adores the fantasy-filled realm of paranormal romance the best. She lives in the Washington DC area with her family and one big scaredy cat, where she loves to spend time with good friends, go dancing, collect wacky coffee mugs from which to drink her favorite beverage, and sing off-key in her kitchen (when she isn’t making characters fall in love, that is).

You can stalk her, I mean find her at