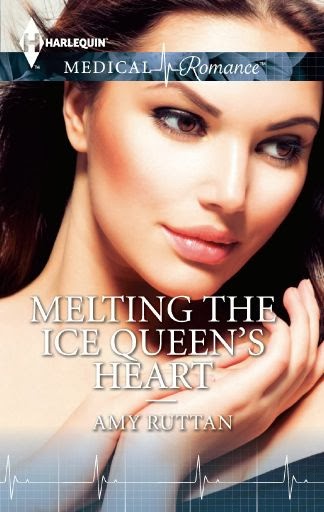 Blurb
It started with a kiss…
Having left his humanitarian posting in Africa to raise his two orphaned nieces in San Francisco, Dr. Gavin Brice has enough on his plate without an inconvenient attraction to his new boss! The frosty Dr. Virginia Potter clearly disapproves of his maverick ways - but with one amazing kiss, the ice begins to thaw….

The moment he’d met her, his breath had been taken away with those dark brown eyes to match the dark hair in a tidy chignon. She was so put together, feminine, like something out of a magazine, and then she spoke about all the rules and regulations, about everything he was doing wrong, and it shattered his illusion.
No wonder the staff called her Ice Queen. She was so cold and aloof. There was no warmth about her. It was all business.
The woman was a brilliant surgeon, he’d noticed the few times they’d worked together, but she was always slapping his wrists for foolish things.
“It’s not sanitary. Legal is going to talk to you. The hospital could get sued,” Virginia had stated.
In fact, when he had a moment, he planned to discuss the functionality and the layout out of this emergency department with her and the board.
It was horrendous.
When he’d been working in the field, in developing countries, everything he’d needed had been within arm’s reach, and if it hadn’t been then he’d made do with what he’d had and no one had complained. No one had talked about reprimanding him.
He’d been free to do what he wanted to save lives. It’s why he’d become a trauma surgeon, for God’s sake.
If he wasn’t needed in San Francisco, if he had any other choice, he’d march into Virginia’s office and hand in his resignation.
Only Lily and Rose stopped him

Born and raised on the outskirts of Toronto, Ontario, Amy fled the big city to settle down with the country boy of her dreams. When she's not furiously typing away at her computer, she's a mom to three wonderful children.
Life got in the way, and after the birth of her second child, she decided to pursue her dream of becoming a romance author.
You can find out more about Amy at her website.