Book Club Thursday: What Book Am I Looking Forward To This Year

- January 02, 2014
I thought very long and hard about this question and I can honestly say that I really didn't feel a pull from any book. Oh sure, there's ones I want to read, but its been a good while since I've counted down the days till a certain book is out. So after weeks of thought, I think I finally figured out what book I am looking forward to the most. And that book is.... 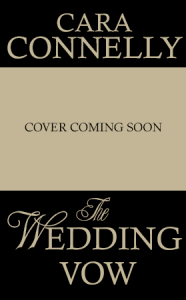 The Wedding Vow
by
Cara Connelly
This book with be out in the fall. I know that's a long time but until then let me leave you with this.

The Wedding Vow
At ninety pounds, Madeline St. Clair might be small enough to fit into Adam LeCroix’s pocket, but he knows she has the grit of a two-hundred-pound cage fighter. Five years ago, as a bloodthirsty young prosecutor, she’d damn near taken him down for lifting a Renoir out from under half a dozen armed guards. That’s a brush with justice that the billionaire playboy can’t forgive or forget.
Now the shoe is on the other foot. Adam’s favorite – and legally acquired – Monet has been heisted from his Portofino mansion, and the insurance company, citing his questionable past, refuses to pay up. So Adam hunts down Maddie, now an associate at a high-dollar law firm, and gives her an ultimatum – work for him against the insurance company, or he’ll use his influence to make sure she doesn’t work at all.
Maddie would rather chew glass than work for Adam LeCroix. If she had her way, instead of sweating the theft of one of his legitimate masterpieces, he’d be tearing pictures out of magazines to decorate his eight-foot cell in Sing-Sing. But he’s got her over a barrel, because with a younger sister to support, she simply can’t afford to lose her job.
As if working with Adam isn’t enough to ruin her life, Maddie’s best friend Vicky ropes her into bridesmaid duty, and decides to test out her do-it-yourself wedding vows on Maddie. Since Maddie’s convinced that marriage is nothing more than indentured servitude, Vicky’s sweet and sappy prose is nothing less than torture.
But as Adam draws her deeper into his life and Maddie learns there’s a heart hiding under the sexy villain’s hard-ass veneer, the sparks they’ve been throwing turn into real heat – and Vicky’s mushy vows begin to make sense. Is there a chance the law-and-order lawyer and the fast-and-loose felon can put the past behind them and write their own wedding vow?

Here's a Link to Read the Excerpt
Cara Connelly's Website

Cara Connelly is a newer author she only has two books out. Here they are...

The Link to Read a Excerpt
Link For My Review

Seven years after a drunk driver took his wife’s life, and just moments after hearing the verdict in her wrongful death case, Tyrell Brown is itching to shed his suit and tie and get the hell out of Houston.  And even though he’d rather be heading to his ranch for a weeklong trail ride than be flying off to his best friend Isabelle’s four-day wedding weekend, he can’t really complain.  After all, her wedding’s in France, and the more distance he can put between himself and the ice-blue-eyed, stiletto-heeled lawyer who grilled him on the stand, the better, cause even though his mama raised him right, it’s damn near impossible to be a southern gentleman around the bitch on wheels.
Victoria Westin is just doing what she’s always done—her job. Whether she likes it or not.  She’d rather be on stage, but her overbearing mother put the nix on that years ago, and now the only role she plays is the hard-nosed, New York City attorney.  She’s good at it, though, even when she’s out of her element in the great state of Texas.  Even when she’s looking into a pair of whisky-brown eyes that seem to see right into her soul.  Now, thank God, the trial’s over and she can drop the mask, leave Tyrell Brown and his sunstreaked hair and sexy cowboy drawl behind, and unwind for a long weekend at her brother’s wedding in France.
But a peaceful European vacation isn’t in the cards for either of them, because as Ty and Vicky soon discover, they’re headed to the same wedding.  They agree to play nice for the bride and groom’s sake, but the laid-back cowboy and the uptight lawyer can’t help but rile each other.  The funny thing is, as the weekend goes on, they can’t keep their hands off each other either.  But with a whole host of obstacles—including a man-eating pole dancer, a cheating ex-boyfriend and a manipulative mother—destined to come between them, will they be able to turn their fake flirtation into a real romance?

The Wedding Favor came out in print on Dec 31st.

Link to Read a Excerpt

I've read this book but due to the fact that my book club is reading this book this month I won't post my review until after we get together, so keep a eye out for it.

Don't forget to stop by my fellow bloggers and see what book they can't wait to read this year. We'd love to hear which books your looking forward to.

On the 9th we will be reviewing Ethan's Mate by J S Scott please join us.