The Pirate Bride by Sandra Hill 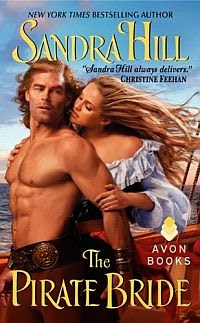 The Pirate Bride
by
Sandra Hill

A Viking to bed, not to wed!

Medana Elsadottir, known as the Sea Scourge, never planned to become a pirate, but there’s no denying her talent. Her female-only tribe has an island hideaway, food aplenty, goods to trade...everything except the means to breed. That’s where the strapping Norsemen tied up in her ship’s hold comes in handy. Eight godly specimen—and Thork Tykirrson is the most virile of them all. Once their, eh, work is done, they’ll be free to leave. Medana had naught to due with this gods-awful plan, but she wouldn’t mind reaping the benefits.

Wed or bed...this Viking has plans of his own.

Renowned as the wildest Viking of his time, Thork was returning home to regain his father’s favor. Mayhap even (shudder) marry. His brazen—and very beautiful—kidnapper has likely done him a favor in preventing such an irksome fate. That doesn’t mean he’ll let her off easy. No one takes anything from a Viking that he’s not willing to give...not even a violet-eyed vixen who sets off the wildest fantasies.
Excerpt Link
Amazon
Barnes & Noble
Sandra Hill's Website

No one does vikings like Sandra Hill. She can make you laugh one second and cry the next. The Pirate Bride is all the you've come to expect of Hill. I loved both Medana & Thork. Their courtship turned out to be wild ride. We are talking kidnapping, being knocked out, and in general having a great time. You also get to visit with past characters and she's added some new ones that I can't wait to see what she does with.  I can't say enough about this book. If your a fan of Hill then this is a great addition to your collections, for those who haven't read her yet, you don't know what you're missing. I would put The Pirate Bride on your Christmas list. Happy reading!