The Pack or the Panther by Tara Lain Cover Reveal 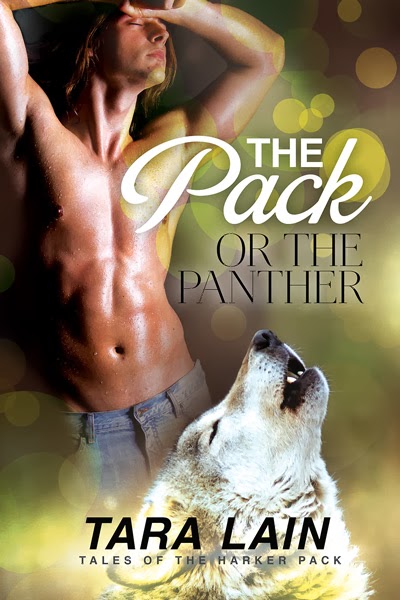 Cole Harker, son of an alpha werewolf, is bigger and more powerful than most wolves, tongue-tied in groups, and gay. For twenty-four years, he’s lived to please his family and pack—even letting them promise him in marriage to female werewolf Analiese to secure a pack alliance and help save them from a powerful gangster who wants their land. Then Cole meets Analiese’s half-brother, panther shifter Paris Marketo, and for the first time, Cole wants something for himself.

When Analiese runs off to marry a human, Cole finally has a chance with Paris, but the solitary cat rejects him, the pack, and everything it represents. Then Cole discovers the gangster wants Paris too and won’t rest until he has him. What started as a land dispute turns into World War Wolf! But the bigger fight is the battle between cats and dogs.

Available for pre-order now at

Cole took hold of a branch a few feet from Paris. “Do you think the alliance will stand?” He shrugged. “Hard to say. I know everyone hopes so, so I hope so too.” Cole pulled his eyebrows together. “But you don’t really care.”

Paris looked up sharply. “Yes, I care. I care about my parents. They’ve been good to me and I owe them a lot. I’m a freak by wolf standards, and my father has never abjured me. I honestly believe he kept me separate for my well-being more than his own. He acknowledges me as his son even though I remind him of his greatest sorrow.”

“Your panther mother.” He nodded. “And Trixie isn’t a brave female. My existence is difficult for her, but she’s been nothing but good to me. She had to stand against the combined disapproval of a lot of other females for me. They didn’t know what I was, but they knew I was Merced’s first wife’s son. They weren’t kind. She was. I value her and want the best.”

Cole nodded. If there was one thing he understood, it was loyalty.

Cole glanced up. Look at that mischievous face. He’d switched from deeply serious to court jester in one second flat. “What about me?” He grinned.

The cat danced around his tree, unfastening buttons on his shirt with intricate skill. “You want the alliance and I want you. Isn’t that an Aristotelian principle? If A equals B and B equals C, then Paris wants Cole to have his alliance so Paris can have Cole’s big yummy cock in his ass. An ass, I might add, that’s been throbbing like a voodoo drum since I first looked in your silver eyes, wolfman.” He whipped off the shirt, leaving his upper body bare.

Wow. Even knowing what was coming, that sight was hard to believe. The cat’s skin glowed in the moonlight like so much alabaster formed into a work of art. If you liked bulky, you wouldn’t like Paris. But if the look of a black leopard stealing along a branch stilled your heart, this sight would do it for you down to the ground. Not really slim. More like lean, with muscles just where they should be, but as if they were made of silk rather than stone. Fluid.

Paris reached and grabbed a branch, then pulled himself up one-armed until he leaned over the wood on his belly. Flip. He circled and came up to sitting, his upper body glowing and long legs dangling. He spread his arms out for a second as if balancing on a tightrope. Then he reached in and started to unfasten his belt. Slowly, he slipped it from his trousers, then swung it over his head until it caught on an upper branch.

He pulled himself to standing and used one hand to slowly lower his fly. White showed in the gap. Oh my. Not white underwear.  White skin. Cole shuddered. He wasn’t used to this kind of sexy. Hell, who was? This cat was one of a kind.