Welcome back to another Book Club Thursday. I hope you've been enjoying weekly get together's. I will admit I didn't know what book I was going to pick and it came down to the last minute before I came up with something. It was harder then I thought to pick just one oldie that I enjoyed. I guess I'm glad we will most likely have this theme again throughout 2014. 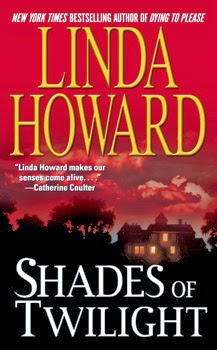 Roanna Davenport was raised a wealthy orphan on her grandmother's magnificent Alabama estate, Davencourt, where she had a passion for horses, a genius for trouble, and a deep love for her cousin, Webb. But everyone expected Webb to marry their ravishing cousin, Jessie. When he did, Roanna's desire became no more than the stuff of dreams -- until the night Jessie was found bludgeoned to death.
After the shocking murder of his wife, Webb left for Arizona, abandoning the legacy that he had once believed was all he wanted. But then an all-grown-up Roanna walked into a dingy bar in Nogales to bring him home; the mischievous sprite he had known ten years earlier was no more. Gone, too, was her fire. In its place was ice that melted at his touch. Webb is drawn back to Davencourt, to Roanna, and to the killer that once destroyed his life and waits only for the chance to finish the job....

To Read a Excerpt

I decided on Shades of Twilight by Linda Howard as my oldie. It was out in 1996. I can still remember when I read it for the first time (loved it so much that I've read it more then once), I just couldn't put it down. I've always enjoyed Linda Howard's series romance but when I moved to her suspense I was really hooked. This is a great story of family, greed and secrets. Even now I could see myself reading it again. I think you'll love it. Now don't forget that it's a little older and might feel dated but I think if you can see past that you'll love it too.

Don't forget to stop by my fellow bloggers and see what they picked as their oldies. I know I can't want to see. Happy reading!