Mine to Hold by Cynthia Eden 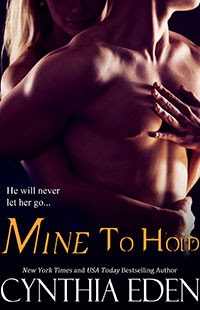 Mine to Hold
by
Cynthia Eden

She was one man’s obsession…
Nine years ago, Claire Kramer’s lover brutally killed her family, and he tried to kill her. She escaped, but she’s been haunted ever since that attack. Too afraid to trust another man and too worried that her past will catch up with her, Claire never gets too close to anyone. But then she meets Noah York.
He must have her.
Noah York is a man with secrets. The world sees him as a billionaire hotel tycoon, but Noah has a dark and dangerous side. For years, he worked covert military operations before he built his fortune. When it comes to death, Noah is a master. He knows that he should steer clear of Claire, but the white-hot attraction Noah feels for the delicate beauty is instant—and consuming.
He will never let her go.
Someone else is just as consumed by Claire—someone who will kill to possess her. And if Noah can’t stop the hunter in the darkness, he may just lose the one woman that he can’t live without.

Being a huge fan of Eden's I was so happy when Mine to Hold came out. It's well written with characters you can't help but like. You meet both of them in Eden's, Mine to Keep, and know right away that their story is meant to be told. Noah's life before he became a hotelier is a little shady and you get to know more in Mine to Hold. Poor Clair's life is a open book for everyone. You feel for what she's gone through and want to fight to help her. Of course she has Noah so she doesn't really need us. Everyone around the couple can tell that the way the couple feels about each other is different then they feel about anyone else in their lives. This series is a must read. Happy reading!