Hard As It Gets by Laura Kaye 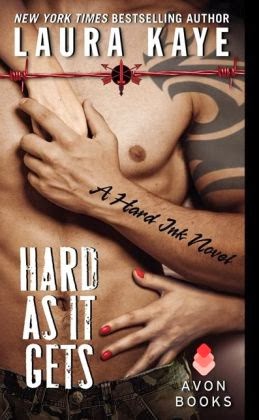 Hard As It Gets
by
Laura Kaye

Out on November 26th

Tall, dark, and lethal...
Trouble just walked into Nicholas Rixey's tattoo parlor. Becca Merritt is warm, sexy, wholesome--pure temptation to a very jaded Nick. He's left his military life behind to become co-owner of Hard Ink Tattoo, but Becca is his ex-commander's daughter. Loyalty won't let him turn her away. Lust has plenty to do with it too.
With her brother presumed kidnapped, Becca needs Nick. She just wasn't expecting to want him so much. As their investigation turns into all-out war with an organized crime ring, only Nick can protect her. And only Becca can heal the scars no one else sees.
Desire is the easy part. Love is as hard as it gets. Good thing Nick is always up for a challenge...

Just looking at this cover I knew I was in for a treat. I mean, come on! Look at it! I was so happy to get my hands on a early copy of this. Besides it being well written, Kaye has filled the first book in the Hard Ink series with great, want to have hero's. Up first is Nick Rixey. You will just love him. He has so much hurt within him. Plus lets not forget the anger that follows that. When Becca Merritt walks into his life asking for help he so badly wants to say no, what with her being the daughter of the man that ruined his life, it would be understandable. But Nick is way to good of a person and jumps in to  help her. Even though he has to eat a little crow and talk to the men closest to him, ones he's ignored for far to long. You'll love watching Nick deal with his past and coming to some understandings with himself. You'll also enjoy his relationship with his brother. They are to much together. Becca too has so much to deal with and she can because she has Nick by her side. I promise you'll be sitting at the edge of your seat waiting for the next book in the series, Hard As You Can which is out on 2/25/14. Happy reading!
Labels: ARC Avon Contemporary Laura Kaye Romantic Suspense