Fear For Me by Cynthia Eden 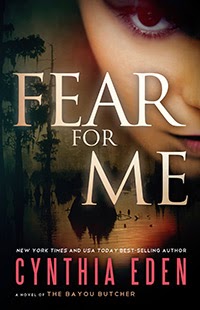 Fear For Me
by
Cynthia Eden

She’s the obsession two men share: one wants her love, the other wants her life.

A shared passion for justice first brought Baton Rouge district attorney Lauren Chandler and US marshal Anthony Ross together—when each played their part in bringing down the infamous Bayou Butcher. The sparks flying between the two made it clear they weren’t just a legal dream team. Then desire had to make way for duty, and what they had was done. But it would never be over.
Five years later, it’s none other than the Butcher who gets things started again, when his shocking jailbreak reunites the lawyer and the lawman…and reignites their love. But this time, the pair is in danger of being permanently parted—by a killer with revenge on his mind, and Lauren on the top of his list. As a new wave of terror sweeps through the streets and swamps of Baton Rouge, one man will pit his boundless passion against another’s relentless hate, for the life of the woman who obsesses them both.
Amazon
Barnes & Noble
Cynthia Eden's Website

For all of us who feel in love with Anthony Ross in Die For Me will be so happy that he has his own story in Fear For Me. There is just something about Anthony that draws you to him and makes you want to learn more about his story. Who knew there was so much we didn't know. Like his relationship with D. A. Lauren Chandler. When the 'Butcher' breaks out of jail Lauren's life is upended and spins out of control. When Anthony figures out that Lauren is in danger, he runs to her side. You will find Fear For Me to be well written with great characters that will keep your eyes glued to the pages of the book. I will tell you that I would read Die For Me first, not that this isn't it's own story, but that you meet Anthony there. It's well worth the read. Happy reading!

I was given this ARC for a honest review
Labels: ARC Cynthia Eden Romantic Suspense Street Team