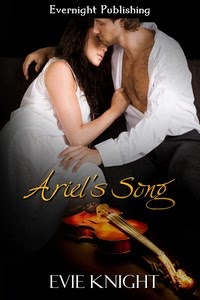 Colin Hoskins, famous classical violinist, is tainted by his past. Angry at life, unable to move beyond the betrayal of his dead fiancé, he’s sworn off performing or falling in love ever again. All Colin wants is to be left alone, except no one listens. Especially the pretty little assistant he can’t fire and his body burns to claim.
Stranded in a foreign country, bankrupted heiress Ariel Parks needs a job to fund her way home. Assistant of sorts to the musician she’s fantasized about for years sounds like a dream job. She never imagined the gorgeous genius would be a reclusive beast. But the real problem is the way every nerve in her body tingles at the mention of his name.

All Romance eBooks  | Amazon | BookStrand | Evernight Publishing
Author Info
Evie Knight writes wickedly sexy contemporary romances with irresistible bad boys, sassy heroines, a bit of conflict, humor and a dash of spice. When she’s not hard at work writing, she spends her time blogging, reading, listening to music, or looking for a muse.
She lives in sunny Southern California.
Evie loves hearing from her readers. Feel free to drop her a line at evie@evie-knight.com or you can stalk her on Twitter @inlovewromance

The long narrow hallway looked as lush as everything else in his house. Ariel looked at the spotless dark wood floors lined by warm sand colored walls accentuated with expensive paintings. She bet all were originals.
“Well, off you go.” The plump housekeeper motioned to the hallway. “He’s in his music studio.”
Ariel bit the inside of her cheek, doubting her decision. Maybe it’d be best to ask the older woman to show her in. She turned to ask, finding the woman no longer stood next to her. Ariel looked around hoping to find her, realizing she stood in the middle of the room alone. She took a deep breath, glancing up at the vast arched ceiling, feeling it swallow her whole.
All right, here goes nothing. Ariel adjusted the tote on her shoulder and walked down the hall, following the origin of the music, slowing down as she approached a half closed door from where the melody came. The notes to a Nirvana song filled her ears. She closed her eyes, allowing his music to hypnotize her how it always did. God. She loved his music.
Some people frowned upon classical crossovers like Colin. Ariel bet he didn’t give a shit what anyone thought of his musical arrangements. He was an artist playing for the love of music and nothing else. He’d probably continue to mix classical with Pop, Rock, and Metallica for as long as he lived.
She drummed her foot on the floor, her insides squealing. Her favorite musician played on the other side of the door. She bid her time, enjoying the music. As tempted as Ariel was to let him know she’d arrived for her first day of work, she didn’t want to interrupt.
When Colin finished playing the Nirvana song, Ariel took a step forward ready to announce her presence. Then, the strings with the first notes to a gypsy song halted her mid-step. Ariel leaned on the wall, closing her eyes once more to hear him play. She resisted the impulse to remove her shoes and dance to the gypsy melody in his hall. Damn, he could play.
“Are you going to come in or stand there all day?” he asked from inside the room.
His voice startled her. Shit. She opened her eyes. How did he know she’d been there all along? Ariel cleared her throat and walked in. “Hi. I-I was waiting…” She motioned to his instrument. A palpable tension filled the air the moment her gaze met his, drawing her to him. His black T-shirt and jeans gave him a dark angel aura.
He wore his hair down without a ponytail. Colin stood next to his music stand. His stubble denser, framing his face, giving his piercing eyes a darker caramel shade. Ariel cast her gaze to the large skull ring on his left pinky finger. The man was a hot rocker playing Mozart.
“Let me make something clear to you.” He raked a hand through his hair, securing a strand behind his ear. “No one walks through that door when I’m in here practicing. Any questions?” Colin placed the bow on the stand and set his violin in its case.
Ariel regained her composure. “No questions. However, I think we need to set some ground rules.” She crossed the room to the bay window opposite from him. “If I’m going to be your assistant, there are some things we can’t do.” She ran her index finger along the edge of the window then placed her tote on the side table next to it. “For starters—” She turned and bumped into his strong chest.
“Enlighten me,” Colin said.
Her heart skipped a beat as she lifted her gaze to him, lingering on his mouth before she met his eyes. Ariel fought the need to kiss him again. How would she ever pull this off when he looked at her with those eyes? Colin trapped her between the bay window and him. He hadn’t touched her yet, but the heat radiating from him being so close ensnared her all the same. Ariel shifted on her feet, trying to set an inch or two of distance between them.
“For starters what, Ariel?” Colin placed a hand on either side of her, making it harder for her to escape. At her silence, he asked, “Are you going to answer me?”
“This.” Ariel rested a hand on his chest, to push him away, his warmth burning her palm. “If we’re going to work together, there won’t be any touching.” Her fingertips tingled at the thrum of his heartbeat. Colin glanced at her hand on his chest. Shit. She curled her fingers into a fist. What was she doing feeling his hard muscles?
“You mean you don’t want me to touch you like this?” He gripped her waist, and she jerked at the unexpected contact.
The heat of his grasp on her waist seeped through the thin layer of her clothes, stirring her insides. “Yes.” She shook her head. “No.”
Colin angled his head, closing the distance. “What else?” he asked, his lips a breath away from hers.