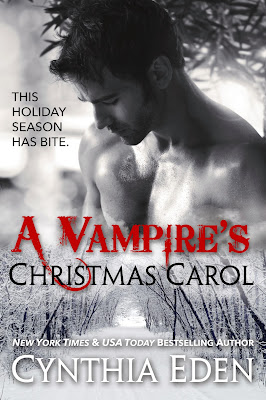 
This holiday season has bite.

Ben Prescott hates Christmas—he’s a vampire, and to him, there’s certainly nothing jolly about the holiday season. While the humans are running around being merry, he’s hunting in the shadows. Ben plans to spend the holidays his way…by stalking deadly prey.

But fate has other plans for Ben.

Three visitors are coming Ben’s way…A demon who will force Ben to face his past, a ghost who will show Ben the present he could have, and a shifter who will reveal the darkness that waits in Ben’s future. Unless Ben can change his ways, he may just turn into a real monster, one who can’t be saved by anyone or anything.

‘Tis the season…to be undead.

Ben’s redemption rests in the hands of the one woman he loved and lost—Simone Laurent. If Ben is going to have a chance at being more than just the beast in the darkness, he has to prove himself to the lovely Simone. A very hard task, considering that, once upon a Christmas Eve, Simone died in Ben’s arms…

Warning:
This book features one very tortured vampire, a sexy ghost from his past, and hot scenes designed to melt the winter snow. Plenty of action, adult situations, and steamy times are ahead. Happy holidays!

Lust clawed through him. The need, the red-hot desire, seemed to burn Ben from the inside.  He grabbed Simone, yanked her flush against him. His mouth locked on hers. He’d always tried to be so careful with her in the past. Played the gentleman because she mattered.
He wasn't a gentleman any longer. Ben wasn't even sure what he was. He just knew he needed Simone naked, and he had to be in her.
He carried her back to his bedroom. He ignored the glittering New York skyline. She was the only thing he could see. Desire pounded through him. His cock was so swollen that he hurt and—
His teeth were extending. Stretching in his mouth.
Ben dropped Simone on the bed and stepped back, horrified.
“Ben?”  Simone sat up on the bed and pushed back the blonde hair that had tumbled forward. “What’s wrong?”
She was so gorgeous and sexy staring up at him.  Looking at him with those wide, dark eyes.


I’m going to hurt her. He grabbed for the control that he’d always held so easily in the past. Only that control was broken. Shattered. “You need to leave.”