The House on Main Street by Shirlee McCoy 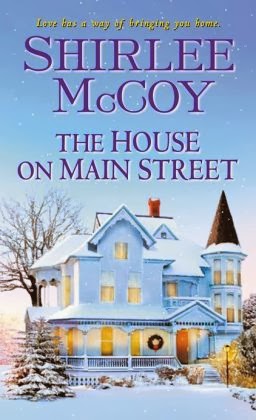 In Apple Valley, Washington, friends are always near, neighbors have no secrets - even if they'd like too - and long-held wishes have a way of coming true...
Interior designer Tessa McKenzie has built a good life far from her Washington hometown. She intends to get back to it - as soon as she sells the cluttered Victorian house and antiques shop she inherited from here sister, Emily. But leaving Apply Valley a second time won't be so easy. There's her grieving nephew, Alex, to consider. And there's Sheriff Cade Cunningham, the adolescent crush who could easily break her heart again if she let him.

To Cade, Tessa was simply his high school sweetheart's kid sister. But now there's no denying she's a beautiful and caring grown woman, one he'd like to get to know again. If Cade wants to change her mind, he'll have to show her that small-town life has its lovable side - and that he does too. Most of all, he'll have to convince Tess they're good together, and that every step has led her right where she was always meant to be...

I have to admit I'm not a big fan of inspirational books, so when I saw The House on Main Street and the cover called to me. I was conflicted. Since Ms. McCoy wrote this book in a different vein I decided to try it. I have to say I'm happy I did. There turned out to be many things I liked about the book, and some things I didn't. I enjoyed both Tessa and Cade. I thought they were both great characters. In fact, many of the characters in the book are good and you'll want to know their stories. It was fun reading about how both Tessa and Cade worked out their relationship. You have to give Tessa props for stepping up to bat like she does for her family. You will find the story to be well written but at times Ms. McCoy's inspirational writing shows through. I found that she set up three main female characters, (I'm including Tessa) to all look the same. She describes them as thin, pale with dark circles under their eyes. All Three??? I also would have liked a little bit more grit to the story. But saying that, or writing it...I enjoyed the story enough that I would read another book in this series. Happy reading!

***I received a ARC of this book for my honest review.
Labels: ARC Contemporary Holiday Shirlee McCoy