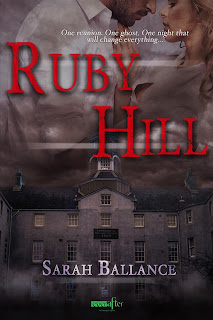 One reunion. One ghost. One night that will change everything...

From her earliest memories, Ashley Pearce has been drawn to Ruby Hill Lunatic Asylum, and she's not the only one. Decades after the abandoned hospital ended its institutional reign of torture and neglect, something lurks in the shadows. Since she’s a paranormal investigator, it's Ashley's job to find out what.

Crime scene expert Corbin Malone doesn't believe in ghosts. A born skeptic, he has no interest in entertaining the hype surrounding the mysterious deaths at Ruby Hill, but he won't turn his back while more women die. He agrees to an overnight investigation, never expecting his first encounter would be with the woman he pushed away a year ago. But when he discovers Ashley is a target, he learns his greatest fear isn't living with his own demons, but losing her for good.

Sometimes no matter how much we try, or want something we can't have it. That's how I felt about Ruby Hill. I wanted to like this book so badly after I read the description. It called to me and I thought it sounded like a great story. Well for ME it didn't turn out that way. As much as I tried I could love it. I didn't hate it either. I just felt it was missing something.    I don't think the writing is bad, just that this author isn't very good at writing very short novellas. Which I feel is very had to do. If the author had written a longer story, I think it would have been much better. I did like the characters for the small amount of time we spent with them. It's a readable story but not one of my favorites. Happy reading!
I was given this ARC for a honest review.