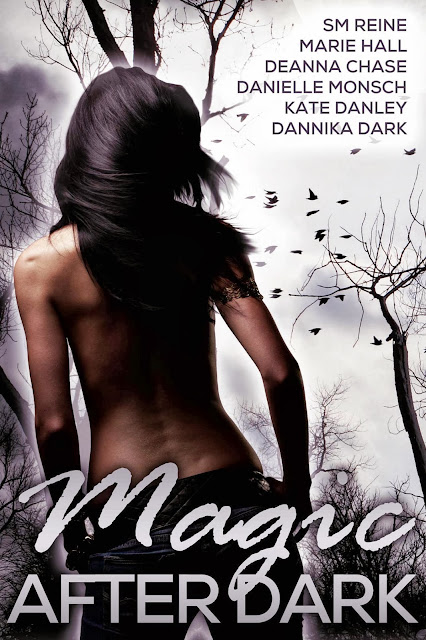 Prepare for a wild ride, whether you're looking for nail-biting drama, mystery, intense action, humor, new breeds of paranormals, or passionate romance.

SACRIFICED IN SHADOW by SM Reine
Lincoln Marshall is a small-town deputy with a very big problem. Six members of his church have been found dead, killed by a rogue werewolf. He'll have to make a deal with the Devil to save victims that have gone missing -- maybe literally. Elise Kavanagh, preternatural investigator and exorcist, is the expert when it comes to violent deaths at the jaws of evil. She's also among the most powerful demons that Hell has spawned. Elise jumps at Lincoln's case, and it's not just because of his down-home charm. Someone's laid a trap for her in Northgate, and she wants to find out who....
CRIMSON NIGHT by Marie Hall
Welcome one and all to Carnival Diabolique- my name is Pandora, and I'm a Nephilim. What does that mean? I'm half demon, what's my other name? Lust. But I'm not all bad. I fight for light, for goodness and truth. But people are starting to disappear and lately I've felt a dark presence lurking around me. I think it might be a death priest and that's really bad. This should have been easy, me killing fanged freaks, getting rid of my pesky priest problem, but I'm about to be betrayed by the one person I thought I could trust with my life and before the night is through I'll be covered in crimson... -Dark Urban Fantasy

INFLUENTIAL MAGIC by Deanna Chase
Welcome to the Crescent City, the home of Willow Rhoswen, faery and magical baker extraordinaire. While fighting for her life, Willow is caught between two gorgeous men as she navigates the corruption of a powerful vampire organization and her own supernatural government agency.

FAIRY TALES AND EVER AFTERS by Danielle Monsch
If you like your fairy tales just a little twisted, this is the series for you! Three tales follow our fairy godmothers as they figure out ways to help the damsels - and mansels - in distress, all the while making sure every couple gets their happily ever after.

MAGGIE FOR HIRE by Kate Danley
When monsters appear on earth, Maggie MacKay is on the job.  No one is better at hauling the creepy crawlies back where they belong… no one except her dad, who disappeared mysteriously in the middle of an assignment.  When an elf named Killian shows up with a gig, Maggie finds herself at the center of a plot to turn the earth into a vampire playground.  The only hope for survival is tracking down two missing statues and a secret that disappeared with Maggie's father.
Warning:  This book contains cussing, brawling, and unladylike behavior. Proceed with caution.
STERLING (MAGERI SERIES: BOOK 1) by Dannika Dark
Follow the journey of a young woman's claim to immortality and her own identity. Zoë Merrick's human life ends when she is brutally attacked by a Mage who gives her the gift of immortality. She soon discovers they are not magicians, but powerful beings who can manipulate energy. Justus De Gradi steps forward to act as her Ghuardian, teaching her how to fight to protect the light within her. Will she learn to accept her fate and trust those around her? Urban Fantasy Romance Series. 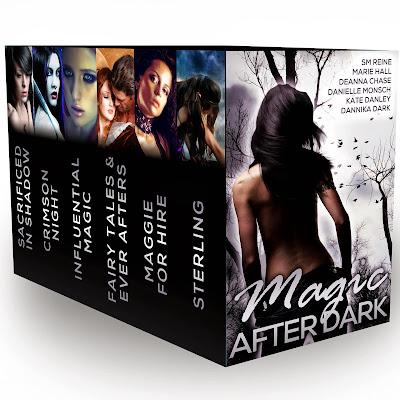 DEANNA CHASE
Deanna is a native Californian, transplanted to the slower paced lifestyle of southeastern Louisiana. When she isn't writing, she is often goofing off with her husband in New Orleans, playing with her two shih tzu dogs, making glass beads, or out hocking her wares at various bead shows across the country. For more information and updates on newest releases visit her website at www.deannachase.com
Sign up for my newsletter to be informed of new releases and giveaways.
Author Links:
Website/Blog:  http://deannachase.com/
Twitter: https://twitter.com/writerdeanna
FB Author Page: https://www.facebook.com/DeannaChaseAuthor
Goodreads: https://www.goodreads.com/author/show/5091902.Deanna_Chase?from_search=true

SM REINE
SM Reine is an author of paranormal and urban fantasy from Reno, NV best known for "The Descent Series," which is about an exorcist on the run from God. She likes long walks on the beach, overcast days, total mayhem, and kittens.

DANIELLE MONSCH
Born to the pothole-ridden streets of Pittsburgh, PA, Danielle Monsch started writing in a time long ago, a time when there were not enough vampire stories to read and she had to write her own to fill the void. Yes, such a time of darkness did indeed exist.

Danielle writes stories full of fantastical goodness and plenty of action, but always with lots of romance (and a bit of woo-hoo!) mixed in. Vampires and Werewolves and Demons and Angels, Sword & Sorcery, Fairy Tales, Updated Mythologies and the like - if it's out of the ordinary, it's fair game for her stories.

Go to www.DanielleMonsch.com for one-stop shopping with everything to do with Danielle - there you can join her newsletter (highly encouraged as it contains all info about upcoming books, plus lots of random surprises) follow her on twitter, and like her on facebook. Just want to send Danielle a quick email? Easy enough, that's Dani@DanielleMonsch.com.
Twitter: https://twitter.com/Danielle_Monsch
FB  Profile: https://www.facebook.com/DanielleMonsch
Goodreads: https://www.goodreads.com/author/show/4786551.Danielle_Monsch

KATE DANLEY
Kate Danley's debut novel, The Woodcutter (published by 47North), was honored with the Garcia Award for the Best Fiction Book of the Year, the 1st Place Fantasy Book in the Reader Views Literary Awards, and the winner of the Sci-Fi/Fantasy category in the Next Generation Indie Book Awards. Other titles include: Queen Mab, the Maggie MacKay: Magical Tracker series, and the O'Hare House Mysteries.
Her plays have been produced in New York, Los Angeles, and DC Metro area. Her screenplay Fairy Blood won 1st Place in the Breckenridge Festival of Film Screenwriting Competition in the Action/Adventure Category. Her projects The Playhouse, Dog Days, Sock Zombie, SuperPout, and Sports Scents can be seen in festivals and on the internet. She trained in on-camera puppetry with Mr. Snuffleupagus and recently played the head of a 20-foot dinosaur on an NBC pilot.
She lost on Hollywood Squares.

MARIE HALL
Marie loves books that make you think, or feel something. Preferably both.
And while she's a total girly girl and loves glitter and rainbows, she's
just as happy when she's writing about the dark underbelly of society.
Well, if things like zombies, and vampires, and werewolves, and mermaids existed. (Although she has it on good authority that mermaids do in fact
exist, because the internet told her so.)

She's married to the love of her life, a sexy beast of a caveman who likes to refer to himself as Big Hunk. She has two awesome kids, lives in Hawaii, loves cooking and occasionally has been known to crochet. She also really loves talking about herself in the third person.

If you want to see what new creations she's got up her sleeves check out
her blog: www.MarieHallWrites.blogspot.com or contact her personally at mariehallwrites@gmail.com
Goodreads: https://www.goodreads.com/author/show/6444714.Marie_Hall
Twitter: https://twitter.com/mariehallwrites
FB Page: https://www.facebook.com/MarieHallAuthor

DANNIKA DARK
Dannika Dark was born on a military base in the U.S. and traveled the world before she was nine. Now she is rooted in the south, but her head is planted firmly in the clouds. She began writing seriously around age twelve and focused on post-apocalyptic storylines. After that, poetry became her obsession and she later wanted to become a lyricist/rockstar. Dannika now works as a full-time author, creating a unique spin on fantasy that began with her bestselling Mageri series. She writes within the Mageri Universe and her new Seven Series begins this October, which focuses on Shifters.

In addition to writing, Dannika designs all of her covers and promotional images. She also enjoys sci-fi and fantasy movies, heaps of chocolate, humiliating herself bowling, Tex-Mex food, dominating board games, and unleashing her dark side.