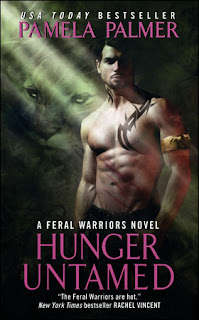 Blurb
For a thousand years she has haunted him—Ariana, queen of the Ilinas, a beauty of mist and light. His love, his life mate… Kougar believed her lost to him forever until the truth of her stunning betrayal left him bitter and hungry for revenge. Now she alone holds the power to save two trapped and desperate Feral Warriors.
Ariana, caught in a deadly battle of her own, is neither the soulless creature Kougar believes her to be, nor the savior he seeks. And when darkness threatens to annihilate both races, the greatest danger of all becomes the glorious love Kougar and Ariana once shared. A love that must never rise again. A love that has never died.
Barnes & Noble
Amazon
Pamela Palmer's Website
Review
I don't know about you but I buy way more then I can read. So I'm trying to get caught up on some of my older TBR books. Up first is Hunger Untamed by Pamela Palmer which was out in March 2011. Oh boy, I really am way behind. You should see my TBR bookcases. I have many. So let's talk about Hunger Untamed. This is book 5 in the Feral Warriors series and about Kougar and Ariana. Palmer's world really pulls you in. She's a fantastic author and her books are a must read. I would read this series in order only because I feel that series books read in order have a much richer story. I do love how Kougar & Ariana's story was handled. There is so much going against them and they have to fight together even though they don't totally trust each other. With winter around the corner it's the perfect time to start a new series, or get caught up on one like I am. Happy reading!
Labels: Avon Pamela Palmer Paranormal