The Ruin of a Rogue by Miranda Neville Blurb Tour 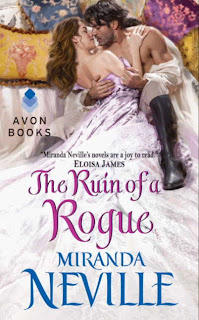 The Ruin of a Rogue
By: Miranda Neville
Avon Romance
Releasing August 27th, 2013

MARCUS LITHGOW is the wastrel son of a worthless father. Only his well born mother gave him any pretense of respectability and this he squandered with his hellraising antics. Now, with an unexpected title and the mantle of responsibility nearly choking him, Marcus returns to England--titled, destitute, and in need of a wife.

Anne Brotherton is sick of running into fortune hunters wherever she turns, and is not about to fall for so obvious a one as Marcus Lithgow. Howeve,r it doesn't mean he can't be useful to her. Association with him will bring scandal down upon her head, and certainly chase of the boringly respectable men her guardians wish her to wed. As long as she keeps her heart to herself, what's the harm in a bit of fun?

But Anne didn't count how seductive Marcus's world--and the man himself--could be. As for Marcus, what started as a means to an end is now the only possible option...because the one thing this gambler can't afford to lose is his heart.

Marcus was half asleep, but the moment the door opened his mind was alert and his muscles tensed. Not even his late-night indulgence at a local tavern could erase the instincts developed over a lifetime.

He relaxed and groaned. He was in Londonwhere no one wanted to kill him. Yet. After several months he should be used to being woken by that odiously cheerful voice, but he’d never had a personal servant before and wasn’t entirely sure why he had one now.

“Lovely day, sir. Not raining at all.”

“Your praise of the English weather is, as always, unfounded in fact. I wish I were back in Italy. Even in November it’s warmer than this hellhole.”

“Now, now, sir. You’re only saying that because you haven’t had your tea.” Marcus heard the tray deposited on the table without so much as a clink of china. He blinked sullenly as Travis swished open the curtain to admit the leaden London light. “Sit up and I’ll bring you a cup.”

As he swallowed the hot drink, his head and his temper improved. Not having to make his own breakfast was the greatest advantage of having acquired such a superior attendant and pretty much the only one. Travis was a nuisance and one Marcus couldn’t shake off. The man clung like a burr. Served him right for saving the valet’s life. Next time he’d know better than to engage in unnecessary acts of altruism.

“And how was Mrs. Weston’s rout?” Travis delivered his question with the disinterested expression
of the well-trained servant, but Marcus knew how anxious he was to hear. He swallowed his tea, feeling the warm liquid enliven his chilled sinews, and let Travis wait.

“Another cup,” he requested.

Travis poured the tea and waited some more, his long, lugubrious face not at all the kind of features
Marcus preferred to wake up to.

“Did your former employers confide in you about their engagements?”

“Not the marchese, sir. But he was foreign.” Just the first of the nobleman’s heinous faults in
the eyes of his valet. “My previous master, Lord Sutton, was sometimes good enough to remark on the events of an evening.”

“That must have been fascinating.”

“Lord Sutton is a gentleman of great propriety.”

“That bad, eh?” Draining his second cup, Marcus put an end to the torture. For the moment.

“Your information was correct. Miss Brotherton was there and I made her acquaintance.”

“She seems an agreeable girl.”

“It will be a fortunate man who wins Miss Brotherton’s hand.” 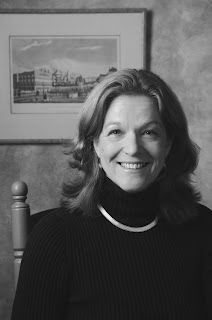 Miranda Neville grew up in England before moving to New York City to work in Sotheby's rare books department. After many years as a journalist and editor she decided writing fiction was more fun. She lives in Vermont.